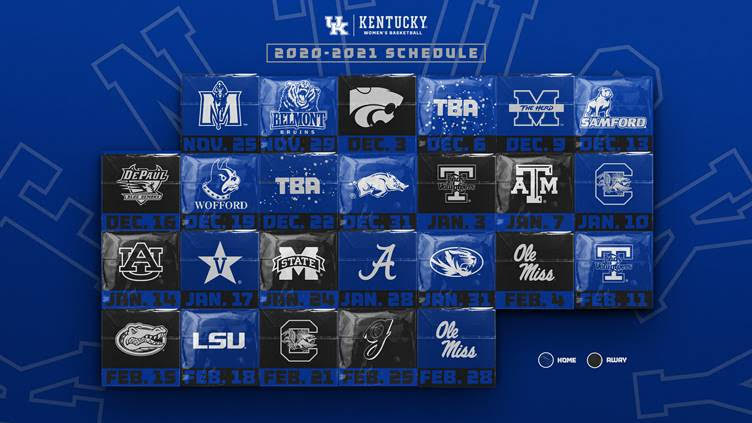 Dates and times are tentative and subject to change due to conference television assignments, which will be released later. The Wildcats will also potentially add additional non-conference opponents in December to fulfill the NCAA Division I requirement of 25 games.

The season will begin on Wednesday, Nov. 25 vs. Murray State at 1 p.m. ET inside Memorial Coliseum while UK will also host Belmont (Nov. 29), Marshall (Dec. 9), Samford (Dec. 13) and Wofford (Dec. 19) in non-conference play. The Wildcats will hit the road twice in December, playing in the SEC/Big 12 Challenge at Kansas State on Dec. 3 before a road trip to DePaul on Dec. 16.

Kentucky’s schedule presents some of the best matchups in the nation as the Wildcats are schedule to play eight games against teams that are ranked or receiving votes in the Associated Press Preseason Top 25, which was released earlier this week. UK is slated to play No. 1 South Carolina twice and will also face No. 6 Mississippi State, No. 13 Texas A&M, No. 14 Arkansas, No. 19 DePaul and RV Tennessee twice. UK is No. 11 in the AP Preseason Top 25.

The 2021 SEC Tournament will be held March 3-7 at the Bon Secours Wellness Arena in Greenville, South Carolina. The NCAA Tournament is scheduled to begin March 19 at various sites around the nation while the NCAA Final Four is slated for April 2 and 4 inside the Alamodome in San Antonio, Texas.

At this point, the anticipated attendance for this season at Memorial Coliseum is up to 15% of normal arena capacity, which includes participants, essential personnel, media and a limited number of spectators. All plans are subject to change based on evolving information as well as local, state and national public health developments. The UK Ticket Office and K Fund has communicated directly with season ticket holders to provide additional information regarding 2020-21 season tickets and to begin the ticketing process. Tickets will be sold in season packages for women’s basketball and K Fund priority rankings will determine the order for ticket assignment.