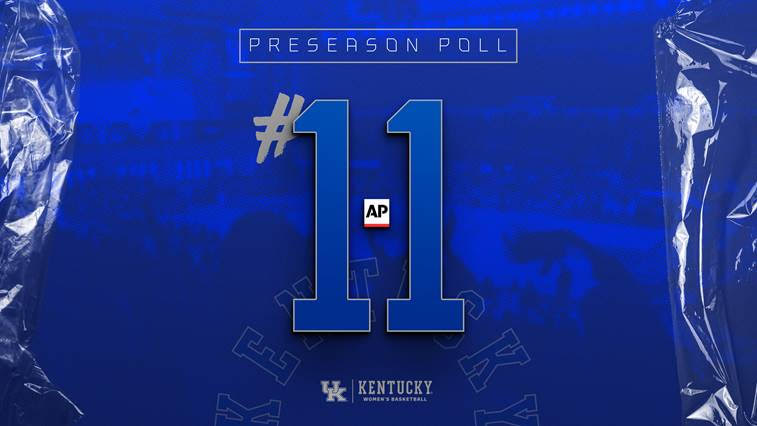 For the 12th time under head coach Matthew Mitchell, the University of Kentucky women’s basketball team will begin its season ranked or receiving votes in the national polls as the Associated Press tabbed Kentucky at No. 11 in its 2020-21 preseason top 25 released Tuesday.

The ranking for Kentucky is its highest since also being ranked No. 11 in the organization’s 2014-15 preseason listing. UK has finished its season ranked in the top 25 of both major listings 10 of the last 11 seasons under Mitchell. UK finished the 2019-20 campaign with a 22-8 record and ended the season No. 16 in the Associated Press Top 25 and No. 18 in the USA Today/Coaches Top 25.

The Southeastern Conference tied for the most teams in the preseason top 25 with five. South Carolina took the top spot at No. 1, followed by No. 6 Mississippi State, the 11th-ranked Wildcats, No. 13 Texas A&M and No. 14 Arkansas. No other conference had five teams all ranked inside the top 15.

This is the not the first preseason ranking for the Wildcats, who were also tabbed 11th in Lindy’s Sports preseason top 25. Sophomore guard Rhyne Howard earned praise from the organization, which named her Preseason First-Team All-America.

Entering its 14th season under Mitchell, Kentucky returns a large portion of its production for 2020-21 even with the departure of five 2020 seniors due to graduation. UK will bring back its top two scorers while also returning its top two rebounders. Kentucky will also add Maryland transfer Olivia Owens, 2019 Pac-12 Freshman of the Year Dre’una Edwards and a top-15 recruiting class in true freshmen Treasure Hunt, Nyah Leveretter and Erin Toller.

Howard is the leading returner for the Wildcats after a long list of accomplishments and honors last season. The guard was one of five finalists for the John R. Wooden Award and Ann Meyers Drysdale National Player of the Year Award while also being named a first-team All-America honoree by the Associated Press and United States Basketball Writers Association. The 2020 SEC Player of the Year finished second nationally in scoring last season with 23.4 points per game while she hit a school-record 84 3-pointers during the year.

Also returning will be the 2020 SEC 6th Woman of the Year in Chasity Patterson, who averaged 11.5 points in 19 games last season. In the post, UK returns KeKe McKinney, who averaged 6.5 points and 4.7 rebounds, and Tatyana Wyatt, who averaged 5.5 points and 3.7 rebounds. Kentucky natives Blair Green and Emma King will also be back for the Wildcats and hope to build on promising 2019-20 seasons.

Several players will return to the team but did not see time last year due to injury or NCAA transfer rules. Edwards headlines that list after impressing during her freshman year at Utah along with guard Kameron Roach, who is healthy after she tore her Achilles at the end of her sophomore season and used last year to rehab and regain strength.

At this point, the anticipated attendance for this season at Memorial Coliseum is up to 15% of normal arena capacity, which includes participants, essential personnel, media and a limited number of spectators. All plans are subject to change based on evolving information as well as local, state and national public health developments.

The 2020-21 season schedule for the UK women’s basketball team is expected to be released in the coming days. The UK Ticket Office and K Fund has communicated directly with season ticket holders to provide additional information regarding 2020-21 season tickets and to begin the ticketing process. Tickets will be sold in season packages for women’s basketball and K Fund priority rankings will determine the order for ticket assignment.