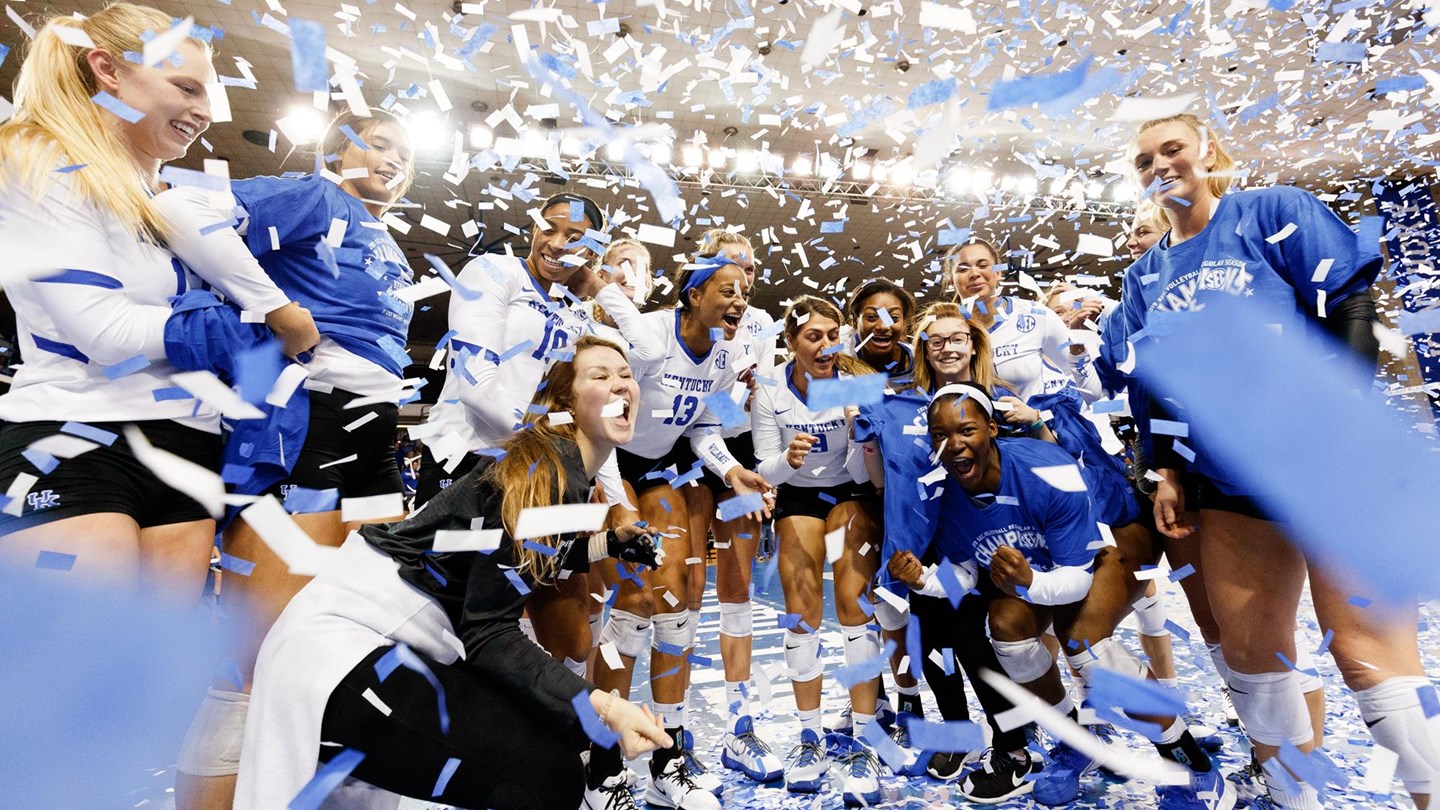 The SEC title is the program’s seventh overall and third in the last three years.

The four Kentucky seniors, Caitlyn Cooper, Leah Edmond, Leah Meyer and Kylie Schmaltz were honored for their achievements pre-match as Saturday also marked Senior Day and the final regular-season game for the Wildcats this season.

The 2019 NCAA Volleyball Selection Show will be on Sunday at 8:30 p.m. ET with ESPNU broadcasting the unveiling of the brackets. Kentucky will be hosting a watch party inside of Memorial Coliseum with the doors opening at 8 p.m. ET. Admission is free and fans will be able to watch the brackets unveiled with the team.

In Saturday’s match, Edmond paced the UK offense, which hit .398 on the day with 13 kills in the match. The Wildcats also got a double-double from Edmond as she added in 10 digs. Stumler was also in double figures, with 11 kills in the match.

Madison Lilley had 38 assists on 47 of Kentucky’s kills in the match. Junior libero Gabby Curry Had 10 digs and finishes the regular season with 25 out of 29 matches with double-figure digs.

Meyer, Cooper and Schmaltz all got in on the Senior Day action with Meyer logging seven kills and four blocks, Cooper accounting for six kills and Schmatlz helping UK to win three points on the floor.

Kentucky hit .400 in the opening set, paced by six kills for Leah Edmond and five kills from Alli Stumler. The Wildcats were strong from the get-go, jumping out to a 10-5 lead before Ole Miss closed the gap to 16-16 at one point in the frame. Kentucky would then go on a 4-0 run to take a 20-16 lead to re-gain control of the set. An Ole Miss attacking error gave the Wildcats three set points and UK took a 25-21 decision to take a 1-0 lead in the match.

The second set was nip and tuck for a majority of the opening stages, as no team had more than a three-point lead before Kentucky went on 4-0 run to take a 19-15 lead and that pushed Ole Miss into its first timeout of the set. After Kentucky build up some offensive rhythm, Stumler, Edmond and Meyer collected three-straight kills to make it 24-20 and UK had four set points. Out of an Ole Miss timeout, the Rebels hit the ball into the antenna and that ended the second set, 25-20 in UK’s favor.

The third set was all Kentucky from the get-go. The Wildcats stormed out to a 9-4 lead before Stumler’s ninth kill of the match pushed the Rebels into an early timeout. UK kept its foot on the gas petal and led by eight points at 17-9 and Ole Miss needed to call its second timeout.