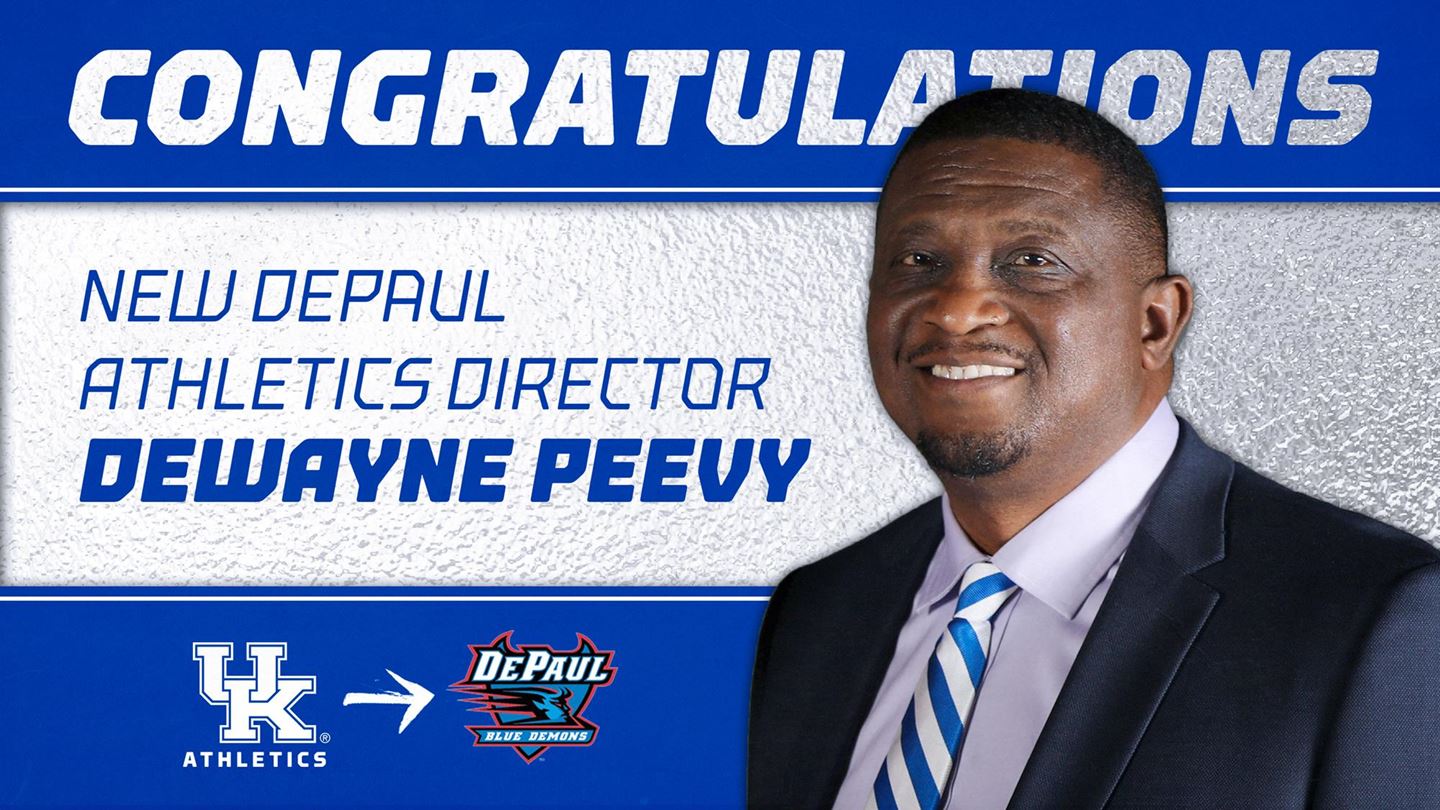 DeWayne Peevy, a leader in communications, fund-raising and day-to-day operations of the UK Athletics Department, has been named director of athletics at DePaul University.

Peevy, who has played a number of vital roles in Kentucky’s ascension to one of the top athletic departments in the country, will be formally introduced at a press conference as the new AD at DePaul on Tuesday in Chicago.

“I will miss ‘My Old Kentucky Home,’ ” Peevy said. “College athletics have been my heartbeat for as long as I can remember. From the University of Montevallo, my time at the Gulf South Conference and Southeastern Conference, and most recently at the University of Kentucky, watching young men and women grow and compete has been the center of my universe. At UK, I was unbelievably fortunate to fulfill that passion and enjoy the privilege to play a small part in the lives of our student-athletes.

“If that alone was the impact Kentucky had on our lives, it would be worth it alone. But perhaps more than that, we are leaving family. Lexington has become our home. My wife, Allison, and I have raised our kids, Kaitlyn and Braden, in Lexington. We’ve been embraced – and become a part of – Big Blue Nation. The relationships we have built at Kentucky will last a lifetime. For us to walk away from that is difficult, but we do so knowing that we will always be a part of BBN and will keep a close eye on the success of the Wildcats.

“I want to thank Dr. Eli Capilouto, Athletics Director Mitch Barnhart and Kentucky basketball coach John Calipari for their leadership, guidance and the opportunity of a lifetime at UK as I try to instill so many of the values I learned from them at DePaul.”

Peevy has been instrumental in Kentucky’s success over the last 12 years. He originally joined the athletic department in 2008 as the director of the since-rebranded media relations department and as the UK men’s basketball sports information director. With a tireless work ethic, a sense of ingenuity, and a persistent passion to push others to evolve and grow, he quickly and steadily gained more responsibilities, eventually playing a prominent role in the day-to-day administration of Kentucky’s intercollegiate athletics program, which supports 22 teams.

As the deputy director of athletics, a position Peevy moved into in 2013, Peevy assisted Barnhart with strategic planning, key fund-raising and public relations initiatives. He also oversaw the UK Athletics senior staff, served as the liaison to the Southeastern Conference and SEC Network offices, and directly supervised the chief financial officer, chief revenue officer, and executive associate ADs for internal and external operations.

Since 2013, UK has had its five highest finishes in school history in the NACDA Directors’ Cup, which measures the overall success of an athletics program. The unparalleled string of success was topped by a school-record 10th place national finish in the Directors’ Cup for the 2016-17 school year.

“This is a very special day for the Peevy family and I’m happy for DeWayne, Allison, and Kaitlyn and Braden,” Barnhart said. “DeWayne is already a well-respected leader in college athletics as he has shown the ability to be effective in numerous areas of athletics administration. At UK, his impact will be felt for years to come and we will be able to enjoy the memories of the successes in our program we experienced together.

“We’re excited for him and look forward to seeing him grow the program at DePaul. On the personal side, Connie and I definitely will miss the Peevys, as they have become ingrained in the fabric of our family and UK Athletics during their 12 years here.”

Big Blue Nation will remember Peevy fondly as a key figure in Kentucky men’s basketball’s dominance over the last decade. Serving as a right-hand man to UK head coach John Calipari, first as an SID and more recently as the team’s administrator, UK led all schools in NCAA Tournament wins (31), Final Fours (four), Elite Eights (seven) and Sweet 16s (eight) over the last 11 years, in addition to unprecedented NBA Draft success. In addition to administrative duties, Peevy was tasked with formulating a men’s basketball schedule for each of the last seven seasons.

“DeWayne is not only a colleague, he’s become a dear friend,” Calipari said. “It’s why I have a lot of mixed emotions today. I know the impact he had here and what we are losing, but more importantly, as a friend and as someone who knows he’s long overdue for this opportunity, I’m just so happy for him. He deserves this. DeWayne is someone I trust wholeheartedly, to the point where he became the center of our scheduling and worked hand-in-hand with me on just about everything we do. It made it so that he and I talked every day, oftentimes multiple times a day. Both Mitch and I trusted him to care about these kids and be about the program, and we knew he would do it with great integrity.

“DePaul will see quickly that DeWayne is a gatherer, a listener, a consensus builder and an idea man who gathers the right people in place to execute. I can’t wait to see what happens for the athletic department at DePaul and for DeWayne personally.”

At DePaul, Peevy will succeed Jean Lenti Ponsetto, who is retiring after a 45-year career at the university, including the last 18 as athletic director.

“From the moment I met DeWayne, I knew immediately that his integrity and passion combined with his impressive collegiate athletics experience would elevate DePaul and its student athletes to even higher levels,” said DePaul President A. Gabriel Esteban, Ph.D. “A visionary leader who cares deeply about his community, DeWayne demonstrates the Vincentian personalism we value so much at DePaul. Jo and I look forward to welcoming DeWayne, Allison and their two children to the DePaul family.”

Peevy, a graduate of the University of Montevallo, came to UK after spending eight years at the SEC. He was responsible for the day-to-day publicity of SEC men’s basketball and served as the media director of the SEC Men’s Basketball Tournament from 2004-08.

Prior to his time at the SEC, Peevy spent nearly three years at his alma mater where he oversaw and handled all media and promotional operations for all nine varsity sports. He received six national publication awards from the College Sports Information Directors of America at Montevallo. He was inducted into the Montevallo Athletics Hall of Fame in 2019.

Peevy also served as the assistant sports information director at the Gulf South Conference from September 1996 to October 1997.

The Birmingham, Alabama, native received his bachelor of business administration degree in accounting from the University of Montevallo in 1996. He is currently pursuing his master’s degree as part of the University of Kentucky/University of Louisville Executive MBA program.

Peevy also served on the NCAA Division I Men’s Basketball Final Four Media Coordination Committee through the 2013 NCAA Championship and he previously served as the sports information director representative on the board of the U.S. Basketball Writers Association.