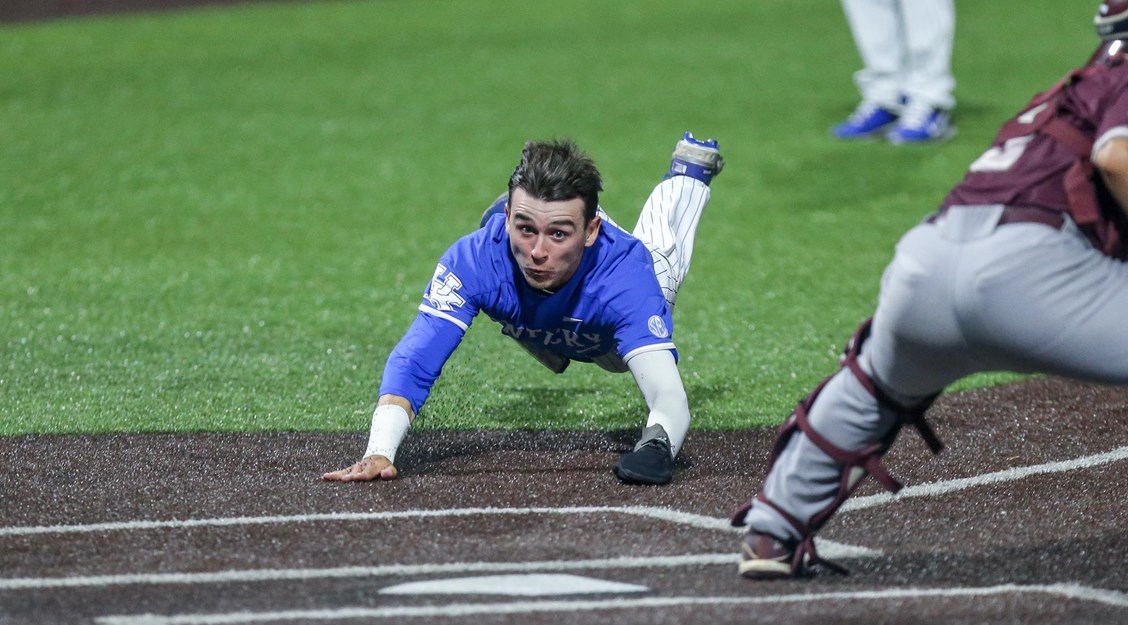 Needing a spark to launch another comeback, Coltyn Kessler and Ryan Ritter delivered as Kentucky erased a four-run deficit and claimed a 7-6 victory over Eastern Kentucky on Tuesday night. It was the Wildcats’ third consecutive win.

Kessler became the second UK player to hit a home run in three straight games this season, driving a towering two-run shot to centerfield in the fifth inning to draw the Cats even. After the Cats (25-13) fell behind again an inning later, Ritter sent a jolt through Kentucky Proud Park with a game-winning two-run, opposite field double into the right field corner.

The Cats’ winning rally started with John Rhodes wearing a pitch for the second time in the game – he has been hit 12 times this season – and Trae Harmon working a six-pitch walk as a pinch hitter. UK coach Nick Mingione continued to pull the right strings, pinch running for Harmon with the speedy Drew Grace, who raced around the bases and slid home headfirst just ahead of the tag for the winning run.

Senior right-hander Jimmy Ramsey came through with his best effort of the season, closing the game with two perfect innings to get the win on the mound. Despite a rocky fourth inning that saw Eastern Kentucky (13-26) score four runs, the UK bullpen allowed just one run over the final five frames to give its offense enough room for a comeback.

UK now will have a quick turnaround as it travels to No. 4 Tennessee for a series that opens Thursday night in Knoxville and opens the final month of the season.

Top 3rd – King doubled to LF and Thomas reached on an error. Ridley was hit by a pitch to load the bases. Ewell reached on a fielder’s choice, King scored. UK 1, EKU 1.

Top 6th – Thomason singled and Ridley was hit by a pitch. Ewell singled through the left side, Thomason scored. EKU 6, UK 5.

Kentucky travels to No. 4 Tennessee in a quick turnaround for a Thursday night series opener. First pitch is set for 7:30 p.m. ET on ESPNU. The radio call will be on the UK Sports Network.