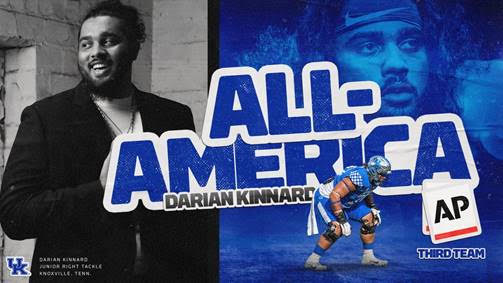 Junior offensive tackle earned a spot on the third team

Kinnard, who hails from Knoxville, Tennessee, has played in 32 career games with 25 consecutive starts at tackle. He graded at 88 percent in 10 games this season with 40 knockdown blocks and 138 blocks at the point of attack. He was also named a first-team All-American by Pro Football Focus and was a first-team All-Southeastern Conference selection by the AP. In addition, he was a second-team choice by the league coaches and was a candidate for the Outland Trophy given to college football’s top interior lineman.

This season, behind Kinnard and the “Big Blue Wall,” the Wildcats rank fifth in the Southeastern Conference in rushing at 187.7 yards per game and Kentucky’s offensive line has paved the way for top rusher, Chris Rodriguez Jr., to average 6.9 yards per carry which leads the SEC and ranks 12th nationally. Playing in just eight games, he has totaled 701 rushing yards and a team-high nine touchdowns.

UK has three current players with more than 1,000 career rushing yards (Rodriguez, A.J. Rose and Terry Wilson), with a fourth player nearing that landmark (Kavosiey Smoke). UK also had three 100-yard rushers (Rodriguez, Rose and Wilson) in a single game (vs. Ole Miss) for the first time in school history.

Kentucky will face N.C. State in the TaxSlayer Gator Bowl on Jan. 2 in Jacksonville, Florida. Coach Mark Stoops is the first head man to lead UK to five consecutive bowl appearances.  As a program, UK is tying its school record for consecutive bowl games, with four under Coach Rich Brooks from 2006-09, followed by one with Coach Joker Phillips in 2010. Georgia is the only other SEC East program to earn a bowl invitation each of the past five seasons.

The Cats finished the season 4-6 and look to continue their winning ways after defeating South Carolina in the regular-season finale. Kentucky played a 10-game schedule exclusively against SEC opposition and now has won at least four league games in four of the last five years. UK has won 20 SEC games over the last five years, most in any five-year period in school history.