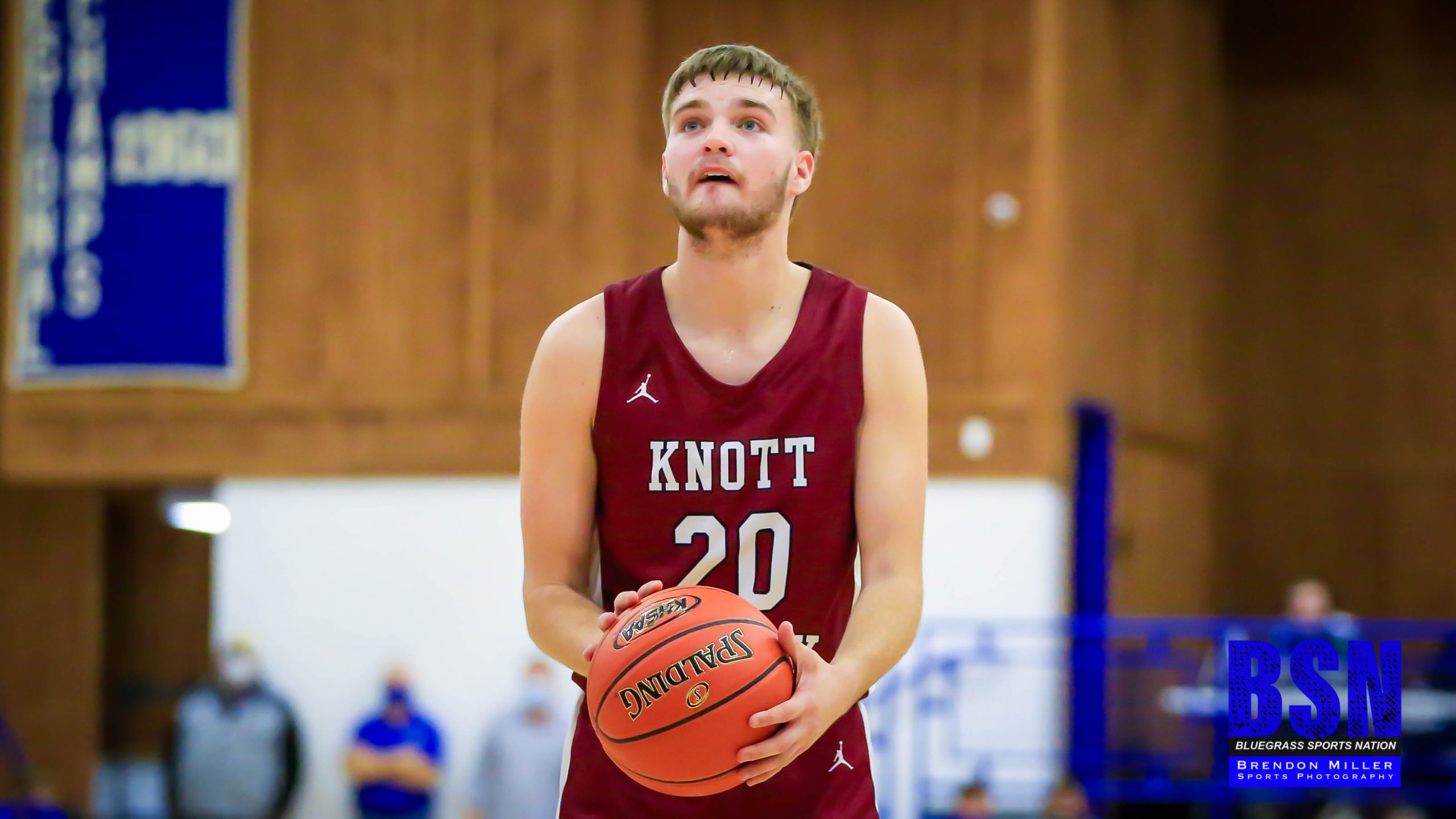 Knott and Breathitt met for the second time of the season in the only 14th Region quarterfinal matchup of teams with winning records. The Patriots (15-7) took the 56th District Championship last Monday Night while Breathitt (16-6) was the runners-up in the 55th, and again got a tough first game draw. The two teams had met in the All-A Regional Final on January 10th in Booneville, with Knott cutting down the nets 78-69.

Breathitt, playing without their Junior wing Jaylen Turner due to Covid, played well in the first half, hitting five 3-pointers to open an eight point lead at the half on a buzzer-beater three by Luke Bellamy, at 29-21. But the Patriots came out of the locker room determined to continue their tournament run and out-scored the Bobcats by 21 in the half behind 14 by Colby Napier and ten from Kizer Slone, for the 64-51 win.

1st QUARTER
Napier opened the game getting to the basket for four buckets in the 1st for eight, with Josh McGuire and Kizer Slone each adding a field goal. Andrew Combs scored six of the Bobcats’ nine on two 3-pointers while Austin Sperry had a basket and Bryce Hoskins was 1of 2 at the line. End of the first, Knott 12 – Breathitt 9.

2nd QUARTER
Breathitt played their best basketball of the game putting up 20 in the quarter while holding the Patriots to nine. Senior Tyler Christy hit a 3-pointer and was 2 of 2 at the line for five. Sophomore Caden Turner came in after Hoskins picked up his 2nd foul and energized the Bobcats with two buckets in the lane and a corner 3-pointer for seven, just before Bellamy’s buzzer 3-pointer. The Patriots were held to nine in the quarter with McGuire getting three baskets in the lane and Napier hitting a corner 3-pointer sandwiched between Turner’s and Bellamy’s 3-pointers. At the half, Breathitt 29 – Knott 21.

3rd QUARTER
The Patriots put up 22 in the 3rd to take control of the game. Napier hit two 3-pointers and had two field goals for 10, while Slone knocked down two from outside the arc and was 2 of 2 at the line for eight. Breathitt could only muster four with the only field goal coming from Sperry. Headed to the 4th, Knott had gone from eight down to a 10 point lead, 43-33.

4th QUARTER
Breathitt tried to make multiple runs in the 4th, as Sperry drove and got to the line where he was 5 of 6 to finish with his team-high 12. Bellamy netted eight and Christy and Turner each had a basket. The Patriots closed out the win as McGuire had two baskets for four while Kent Damron had five of his six. 8th Grader Drake Slone had his only four of the game while Napier finished off the game with six to set his game-high 27.

NEXT:
Knott will face Perry in the Semi-Finals at 5:30 on Monday. Knott defeated Perry on February 20th in Hindman, 72-67.