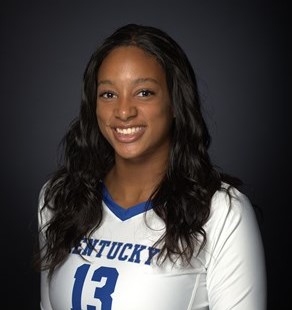 Senior becomes the second Wildcat to win award for 2019 season

LEXINGTON, Ky. – Senior outside hitter Leah Edmond has been named the Sports Imports/American Volleyball Coaches’ Association National Player of the Week, it was announced on Tuesday afternoon.

The Lexington, Kentucky native registered 6.13 points and 5.38 kills per set and a .487 hitting percentage in road wins at South Carolina and No. 11 Florida this past weekend. Edmond recorded a career-high 30 kills against the Gators, the most kills in a single match by any UK player since 2004. She also had 11 digs in Sunday’s match for her ninth double-double of the season. On the week, Edmond also posted five aces and two total blocks.

Edmond becomes the second Wildcat to win the coveted award this season, joining Alli Stumler who took the honors back on Oct. 1.

Kentucky returns to the court on Wednesday night at 7 p.m. ET in a crucial showdown against Missouri in Memorial Coliseum. The match is UK’s first home match in over two weeks and tickets are available at UKathletics.com/tickets. The Wildcats are in a tie for first place in the SEC with three games remaining in the season. Wednesday night’s match will be televised on the SEC Network, ESPN3 and the ESPN app with Courtney Lyle and Lizzie Stemke on the call.