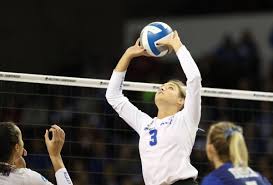 With the sweep, UK runs its winning streak to six matches and remains in firm control of its own destiny in the Southeastern Conference title race, sitting at 14-2 in the league and 21-6 overall. With the loss, the Tigers fall to 18-7 overall on the year and are 10-5 in SEC matches.

Offensively, Leah Edmond, the reigning national player of the week, lead all players in the match with 18 kills and Lilley added 37 assists with two service aces. Alli Stumler backed up her 27-kill performance on Sunday with her 19th 10-plus kill match of the season, contributing 10 kills and seven digs for the Cats. Collectively, Kentucky had a .272 hitting percentage, with the Tigers hitting .127 as a team.

The seven blocks for Meyer is just one off of her career high set back in October against Ole Miss. The graduate student had a complete line, registering four kills, and seven blocks on Wednesday. Kendyl Paris was also dynamite in the match Wednesday, collecting four kills on just seven swings and blocking three balls.

Head coach Craig Skinner had his best night of the season on the challenge review, winning all three of his challenges in the match. Skinner went 3-for-3, burning all three objections within the first 17 points of the match in the opening set. They turned out to be crucial decisions for the 15th-year boss, who is now 34-of-48 (.708) on the year with his challenges.

After taking the weekend off for its final bye window of the season, Kentucky will travel to Baton Rouge, Louisiana to take on LSU at 8:00 p.m. ET next Wednesday night. The last time Kentucky played LSU, the Cats swept the Tigers on Oct. 23 in Memorial Coliseum. The game will be televised on SEC Network, ESPN3 and the ESPN app.

Set One
Kentucky went on an early 6-0 run including two kills from Leah Edmond teaming up with a block by Caitlyn Cooper and Kendyl Paris forcing Missouri to call a timeout, trailing 9-5. The Wildcats momentum continued after the timeout making the score 14-8 heading into the middle of the set. After another 3-0 run by Kentucky, Missouri used their last timeout of the set trailing 15-8. Leah Edmond led all players with eight kills as Kentucky held Missouri to a .269 hitting percentage while Kentucky hit .464. A backrow kill by Edmond ended the set as Kentucky won, 25-18.

Set Two
Leading in the middle of the frame, Kentucky started to pull away causing Missouri to call a timeout with the score sitting at 11-10. Out of the timeout, the Cats did not slow down as they won 15 of 21 points to get a six-point lead as Missouri called their second timeout, trailing 19-13. A kill from Alli Stumler and a block by Madison Lilley and Leah Meyer ended the second set with Kentucky on top 25-18. Missouri was held to a .026 hitting percentage and 12 errors in the second frame.

Set Three
The Wildcats got off to a hot start in the third set, taking control from the beginning with a 5-1 lead out of the gates. Following a block by Meyer and Lilley, Missouri called its first timeout trailing 18-15 and UK just seven points from the finish line. UK took a timeout late in the set after Missouri went on a 3-0 run to close the gap to 21-21, but UK responded by winning the final four points of the match out of the timeout and an attacking error ended the match for Kentucky as the Tigers hit it out.