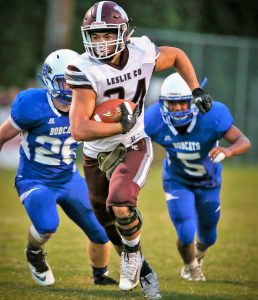 Leslie has since gone on to lose the next three games of the season, losing to Whitley County 41-13, Willamsburg 46- 41, and last week suffered a 34- 12 loss to South Laurel.  Breathitt County who once a powerhouse in football from the mid 1990’s through the first decade of this century, has struggled in recent years and has gone winless in four games this season.  Breathitt County has been defeated significantly by Montgomery County 47- 12 in week one, Perry County Central 51-6 in week two, Floyd Central 28-6 in week three and Prestonsburg last week 60-26.

History of the Rivalry:

In the same era when Breathitt County become a Football powerhouse winning three class 2A state championships over a period of seven years, Leslie County was also a competitive program and produced one of the best athletes to ever come from the state.  Tim Couch was a phenomenal athlete in Football and Basketball.   Couch was a highly heralded Quarterback and drew interest from several division one schools such as Tennessee, Alabama, and Kentucky.  Couch would later go on to play for the University of Kentucky, be a finalist for the Heisman Trophy award, and go onto to be the number one overall draft pick of the NFL Draft in 1999.  As a former native of Breathitt County and alumni of Breathitt County High School, I remember the battles between Breathitt County and Leslie County during the Couch era being epic, drawing spectators, fans, and news coverage from across the Commonwealth.  When the Eagles and Bobcats would play they were in the same class of Class 2A, both ranked in the WYMT TV top ten coverage area.  The games usually come with huge stakes on the line, potentially home field advantage on the or playing for the right to advance in the KHSAA playoffs.  While Couch was the attraction everyone wanted to see and gathered most of the attention around Leslie County Football, Breathitt was a more balanced team and often got the best of Tim Couch and the Eagles. The battles between the two teams are talked about as some of the greatest moments in East Kentucky Football history.

Leslie County improves on the season with a record of two wins and three losses.  Leslie County will now travel to Pike County facing the East Ridge Warriors.  Breathitt County remains winless with a 0 and 5 record.  Breathitt County will also travel on the road to face the Knott County Central Patriots.  Good luck to both teams the rest of the season, as it has been a pleasure covering your teams.

Stats have been provided by WJSN radio host Steven Neace.