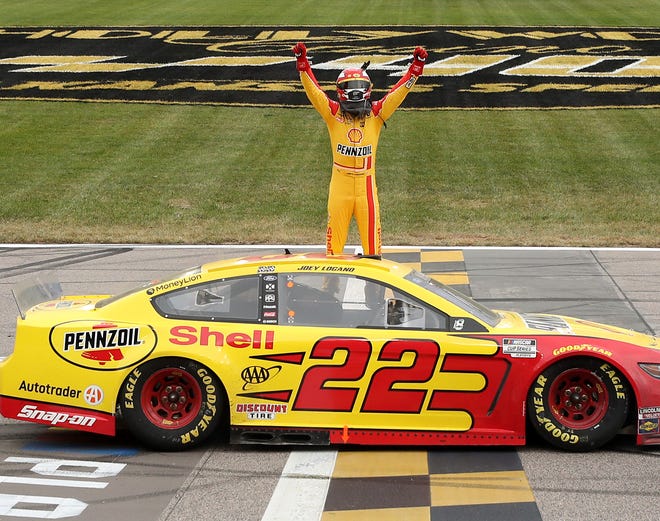 Joey Logano led the final 44 laps of Sunday’s race at Kansas Speedway to hold off an aggressive Kevin Harvick to the checkered flag. The Victory secures Logano’s a spot in the NASCAR Cup Series Championship Elite 4 at Phoenix on Nov. 8.

Chase Elliott, who started in the pole position, maintained his lead taking control of the first 20 laps.

Kevin Harvick showing signs of speed drove his Ford to the front with 47 circuits remain in Stage 1.

The pole sitter would finish the same position in Stage 1 for which he started, gaining 10 playoff points for Stage 1 win.

Chase Elliott reports continued radio communication problems.  This Issue had no baring in Elliott’s Stage 1 finishing position, but starting to cause some controversy with NASCAR officials, with no spotter/driver communication.

Denny Hamlin takes advantage and the lead by capitalizing with clean air factor. Kevin Harvick fights back to battle for the checkers only to run out of real-estate before the conclusion of Stage 2.  Denny Hamlin  is credited with  Stage 1 win.

Denny Hamlin, seeking his first career championship,   led 58 laps before running into trouble early in the final deciding stage.  While running fifth, Hamlin tagged the outside wall and had to pit for new tires.  Denny Hamlin fell off the lead lap in result of unscheduled pit stop.

NASCAR Cup Champion Joey Logano’s expedite pit stop under 50 laps to go, allowed the opportunity for Logano to guard the lead from his rear view mirror, holding off Kevin Harvick to win the Hollywood Casino 400 at Kansas Speedway. Relevant that Kevin Harvick unloaded the fastest hot rod on the track but couldn’t contend with the dirty air bubble created by Logano’s blocking strategy.

The victory was the third of the season for Joey Logano, who began the day in 5th place within the field of eight.

Joey Logano will be first of the four-driver Championship Round of the NACAR Cup Series playoffs at Phoenix 3 weeks out.  Winning last spring race at Phoenix, Logano should be highly ranked as an odd favorite to contend for the Championship honors.

Home-State favorite Clint Bowyer from Emporia, saw his Cup Series-long quest to win at Kansas Speedway ended with a 26th finish on Sunday. Bowyer, will retired after the 2020 season and begin a new career as a television booth commentator.

Kurt Busch won his way into the NASCAR Cup Series Round of Eight playoffs with a victory at Las Vegas in the second round. To his dismay, Kurt would suffer engine problems finishing 38th.  After Kansas race, Kurt Busch is listed a 73 points deficit behind Brad Keselowski for the fourth spot. Two races remaining for final cut, Kurt may need to win either one of the two remaining playoff races to punch a ticket to the Playoff Final 4.