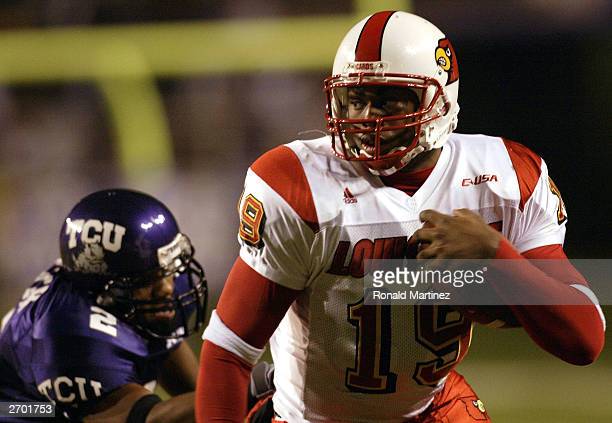 Michael Bush rushed for 2,508 yards during his UofL career

Michael Bush, one of the school’s all-time leading rushers,  will have his No. 19 jersey honored at the Florida State game on Friday night at Cardinal Stadium.

It will be the 26th jersey to be celebrated in program history.

The Louisville, Ky. native, played for the Cardinals from 2003-06 and guided the Cardinals to three-straight bowl appearances, including a win over No. 10 Boise State in the 2004 Liberty Bowl. He rushed 12 times for 96 yards in the win over the Broncos. The Cardinals finished that season 11-1 and captured a Conference USA title.One of the most highly recruited players to ever sign with the Cardinals, Bush rushed for 2,508 yards, which still stands eighth all-time in school history, while his 39 career touchdowns are third-most in school history. As a receiver out of the backfield, Bush caught 50 passes for 651 yards and two touchdowns during his three seasons with the Cardinals.

The 2005 campaign was Bush’s best, rushing for 1,143 yards — despite missing two games — and a single-season record 23 touchdowns in leading the Cards to the Gator Bowl. That season saw Bush total six 100-yard rushing games, including a 204-yard, three-touchdown performance in a win over Florida Atlantic. He opened the year with 128 yards and two touchdowns in a win over Kentucky and added 159 yards and four touchdowns in a game at West Virginia.

As a sophomore, Bush rushed for 734 yards and seven touchdowns, running for 106 yards in a 70-7 win over Cincinnati at Cardinal Stadium – his lone 100-yard game that season.

As a freshman in 2003, Bush rushed for 470 yards and six touchdowns to guide the Cards to the GMAC Bowl that year.

Bush’s promising senior season was cut short in the opening game when he rushed for 128 yards and three scores in the Cardinals’ win over Kentucky. Bush suffered a season-ending injury in the third quarter of a 59-28 win over the Wildcats.

The former Male High product was drafted by the Oakland Raiders in the fourth round, and played four years for the Raiders and two with the Chicago Bears. Over his six-year NFL stint, Bush rushed 3,250 yards rushing with 29 touchdowns and 1,010 yards receiving with two touchdowns. His best season came in 2011 with the Raiders when he ran for 977 yards and seven scores.

A two-sport athlete at Male High, Bush twice earned the Paul Hornung Award as the state’s best prep football player, was named Mr. Football and Gatorade Player of the Year as a senior and was runner-up for Mr. Basketball, averaging 21.1 points and 10.5 rebounds per game.

As a sophomore and junior, he amassed 3,031 yards and 37 touchdowns as a receiver and led the team in tackles. As a senior quarterback, he passed for 2,891 yards and 35 touchdowns and was a workhorse in the memorable 59-56 state championship loss to Trinity. He passed for 468 yards and six touchdowns, rushed for 116 yards and a score, caught two passes, recorded five tackles, and returned one punt and one kickoff.