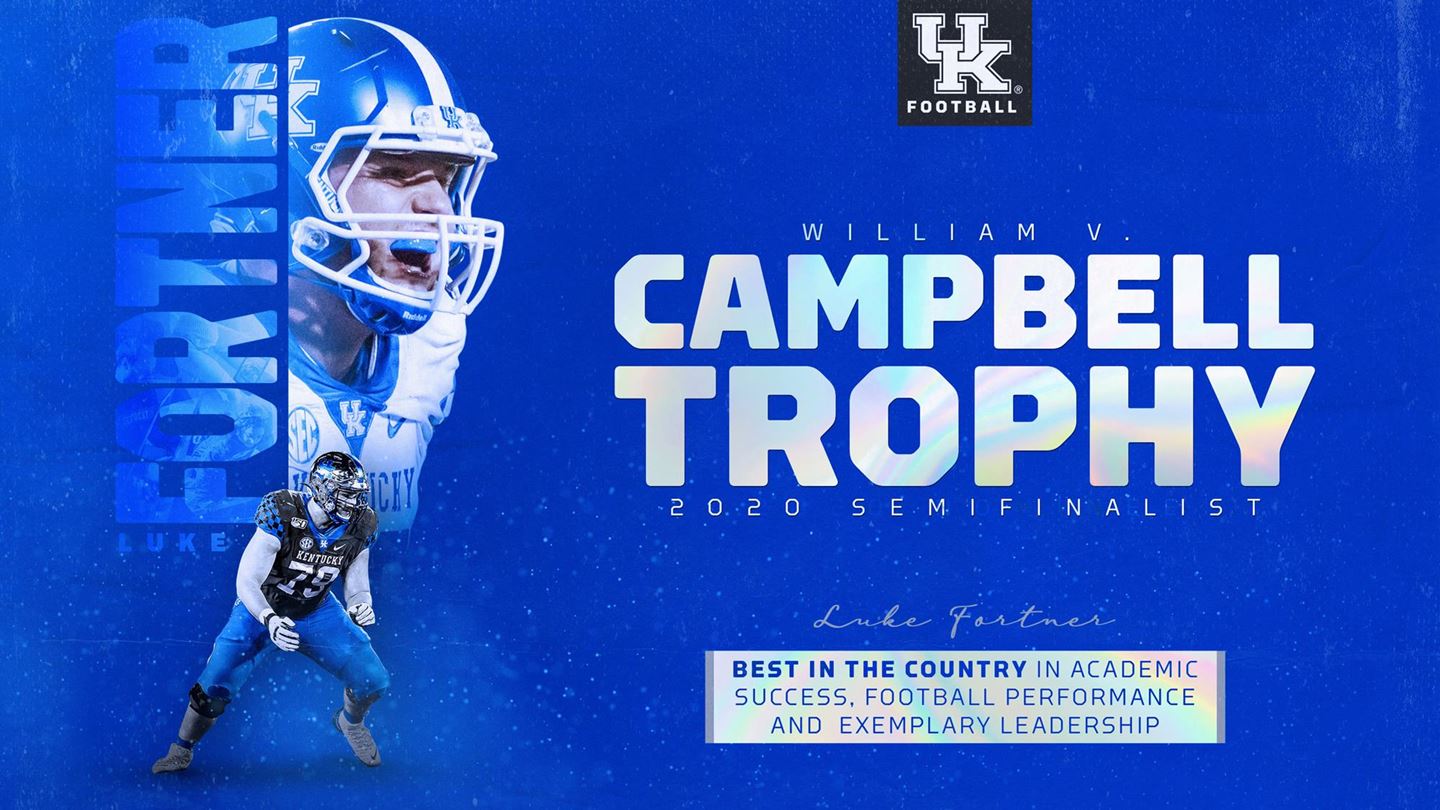 Trophy is given to the college football player with the best combination of academics, community service, and on-field performance

University of Kentucky senior offensive guard Luke Fortner has been named a semifinalist for the 2020 William V. Campbell Trophy® presented by Mazda, the National Football Foundation & College Hall of Fame (NFF) announced today. He is one 199 semifinalists for the coveted award, an all-time record in the 31 years of the Campbell Trophy.

Celebrating its 31st year, the award recognizes an individual as the absolute best football scholar-athlete in the nation for his combined academic success, football performance and exemplary leadership. The NFF will announce 12-to-14 finalists in November, and each of them will receive an $18,000 postgraduate scholarship as a member of the 2020 NFF National Scholar-Athlete Class Presented by Fidelity Investments. Later this year, one member of the class will be declared as the winner of the 31st Campbell Trophy® Presented by Mazda, having his postgraduate scholarship increased to $25,000 and receiving his own 25-pound-bronze version of the iconic statue.

Fortner, of Sylvania, Ohio, has been a standout in all three categories of the award throughout his Wildcat career. In the classroom, he graduated in December of 2019 with a degree in mechanical engineering and is currently working on a master’s degree in mechanical engineering. He is on track to graduate with his master’s degree in December of 2020. He’s a three-time member of the Southeastern Conference Academic Honor Roll and has three times been named to the Dean’s List. In 2019, Fortner was inducted into the school’s Frank G. Ham Society of Character which honors Wildcats who have shown an extraordinary commitment to academic excellence, athletic participation, personal development, career preparation and serving as a role model.

Fortner put his degree to good use last fall when he, along with other UK engineering students, played a significant role in helping a team of Toyota Manufacturing engineers design, test and manufacture a specially-built push cart vehicle through a project called “Lift Them Up.” The push cart vehicle provides a Kentucky Children’s Hospital patient the chance to both accompany the Wildcats on the Cat Walk and attend a game at Kroger Field.

On the field, Fortner has been an integral part of the “Big Blue Wall,” playing in 33 career games with 14 starting assignments.

In 2019 at right guard, he totaled 27 knockdown blocks, no missed assignments, allowed only one sack, and had just one penalty in 646 plays. He also was a key cog in helping four Wildcats rush for at least 500 yards, only the second time in school history that has happened, also 1976. Lynn Bowden Jr., the Paul Hornung Award winner, become the first player in college football history with at least 1,400 rushing yards, 300 passing yards and 300 receiving yards in the same season.

Fortner was recently one of just 11 FBS players named to the 2020 Allstate American Football Coaches Association Good Works team for his commitment to community service. He is also a nominee for the Wuerffel Trophy, given to the nation’s top community servant.