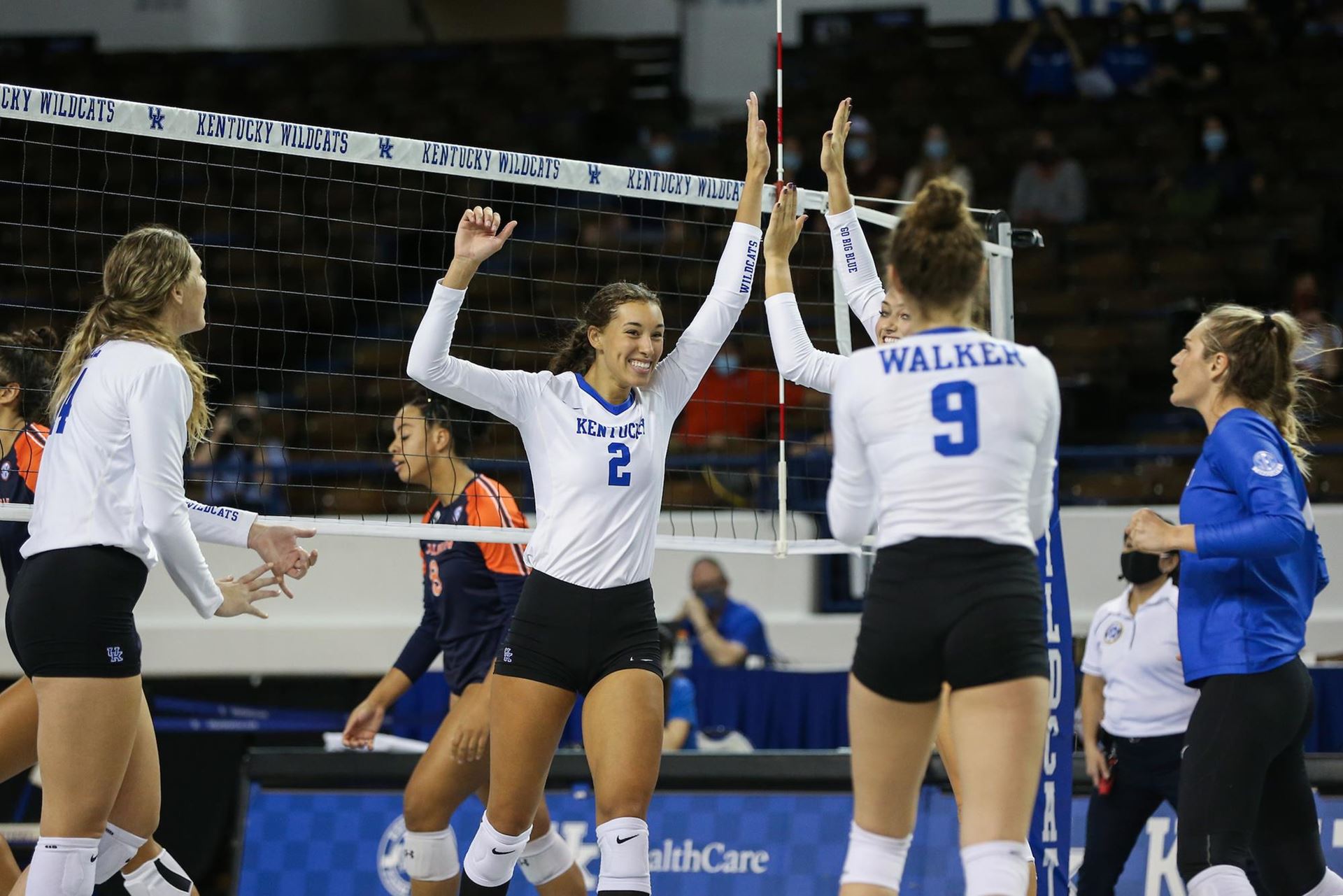 The No. 2 Kentucky Volleyball team got a career-high 12 kills from freshman Madi Skinner and a career-high eight blocks from sophomore Azhani Tealer en route to a 3-0 (25-15, 25-12, 25-16) win over Mississippi State on Friday afternoon in Starkville.

In the course of all three sets, Kentucky never trailed by more than two point in any set, and led wire-to-wire in the first and third sets to complete one of the most dominate performances of the season for the Wildcats.

“I was really happy with our discipline, and I thought we executed really well,” UK coach Craig Skinner said. “I was pleased with our ability to kill behind the setter, which was important in today’s match. I also felt like we won the serve and pass game from beginning to end in the match.”

Skinner hit .647 in the match with 12 kills on 17 swings and only one error. Tealer had her best output of the season coupling eight blocks with nine kills on 12 swings, no errors and a career-high .750 hitting percentage in the match.

Alli Stumler was the other Wildcat in double-figure kills with 10 on the afternoon, just missing out on her fifth double-double of the season by two digs as she ended the match with eight.

UK held Mississippi State to .042 hitting for the match, and -.074 in the second set alone. A large part of that was the terrific play by libero Gabby Curry, who had 13 digs and both Riah Walker and Lauren Tharp who both tallied seven digs in the match.

Kentucky will play its final match of the fall season on Saturday at 1 p.m. ET. The match will be shown live on the SEC Network+ and the ESPN app.

Kentucky won seven of the first eight points of the opening set, as Alli Stumler laid the hammer on a pair of kills from the left side and senior libero Gabby Curry had an incredible pancake to keep a point alive as the Wildcats jumped out to an early lead and force the Bulldogs into a timeout. Mississippi State used a 4-0 run midway through the set to keep things close, as a 13-5 Kentucky lead was cut to 13-10 and Kentucky called its first timeout of the set. Stumler continued her hot start with her fifth kill pressing the Bulldogs into their final timeout, trailing UK, 18-11. Kentucky closed out the set on a MSU service error, and took the opening frame with a 10-point cushion, 25-15. UK hit .367 in the first set led by five Stumler kills. Madison Lilley had 10 assists and Gabby Curry tallied seven digs to lead all Wildcats.

Craig Skinner won his fourth challenge of the season to put the Wildcats up 15-9 at the media timeout of the second set, as the Wildcats got a touch call after review to give Kendyl Paris her first kill of the match after earning the start on Friday afternoon. Sophomore Azhani Tealer had five kills to that point in the match, and was hitting a robust .714 through the opening set and a half. That played a large part in a 7-0 Kentucky run midway through the set as Kentucky doubled up Mississippi State 18-9, and the Bulldogs took a timeout trialing by nine. UK ran its lead up to nine points as Madi Skinner pummeled her eighth kill to the floor and the Wildcats closed out the set, 25-12, by winning 18 of the last 21 points in the set.

Kentucky raced out to a 7-2 lead in the third set behind the stellar hitting of Alli Stumler and Azhani Tealer. The Wildcats at that point in the match had three players (M. Skinner, Tealer, Paris) hitting above .500 in the match) and remained in charge of the third set to take a five-point lead, spurring a Bulldog timeout early. Madi Skinner terminated her 11th kill of the match to give the Wildcats an 18-11 lead in the third set, as MSU burned its final timeout with the finish line nearing for UK. Junior Cam Scheitzach entered the match to set for the Wildcats, and she helped see out the final points of the match and pushed UK across the finish line to a sweep of Mississippi State.