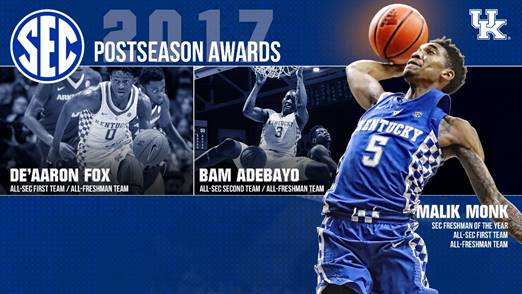 BIRMINGHAM, Ala. – After leading the Southeastern Conference in scoring throughout the regular season, Kentucky guard Malik Monk was honored as the Freshman of the Year by the league’s coaches on Tuesday to highlight the annual SEC honors for the Wildcats.

Monk and backcourt mate De’Aaron Fox were both selected to the All-SEC First Team, while classmate Bam Adebayo earned second-team honors. All three were named to the All-SEC Freshman Team. Kentucky is the only school with three players on either the first or the second teams.

All 14 conference head coaches voted on the eight-man first- and second-team All-SEC squads. Ties were not broken.

Monk is the eighth Wildcat to win SEC Freshman of the Year as voted on by the league’s coaches in Kentucky’s storied history. He is the seventh player in the last eight seasons under John Calipari’s direction to claim the distinction. With the freshman trio capturing league honors, Calipari has now coached 21 players who have earned All-SEC accolades. At least one player has been named to the All-SEC Freshman Team, including 22 total, in all eight seasons under Calipari, and in seven of the eight seasons multiple players have been tabbed to the squad.

Together, UK’s three star freshmen comprised the top-scoring freshman trio in the nation at 50.0 points per game. They are one of the most decorated classes in program history. Monk and Fox have already hauled in All-America honors, and together the three combined for nine of the possible 17 weekly SEC Freshman of the Week award – more than any other team in the conference.

All three rank among the top 20 scorers for a freshman season in program history. Monk is third with 656 points scored on the year, Fox is 16th with 450 points and Adebayo is ranked 20th with 411.

Monk averaged 21.2 points per game, edging Thornwell by .001 of a point for the regular-season scoring title. His points per game ranks in the top 20 nationally. No Calipari-coached player has ever averaged more than 21.2 points for an entire season (Dajuan Wagner at Memphis in 2002). He’s scored in double figures in all but one game this season and has 17 games of 20 points or more, including a Kentucky freshman record 47 points vs. North Carolina in December. Furthermore, Monk already ranks in the top 15 of all-time scorers in a single season in Kentucky annals. The freshman from Lepanto, Arkansas, is the only freshman in program history with four 30-point games, and six times this season he has scored at least 20 points in a half.

Fox led the league in assists per game at 5.0 per outing. He also ranked in the top 10 in scoring at 15.5 points per game. He is one of three freshmen in the country to average at least 15.5 points and 5.0 assists per game. Markelle Fultz from Washington and NC State’s Dennis Smith Jr., are the others. He made history in November, becoming just the second player in Kentucky history to register a triple-double. Fox had 14 points, 11 rebounds and 10 assists in the historic game vs. Arizona State. It marked the first triple-double since Chris Mills’ had 19 points, 10 rebounds and 10 assists on Dec. 27, 1988. Against Stephen F. Austin, in the season opener, Fox dished out 12 assists to set two program records. The 12 dimes were the most by any Wildcat in his debut, and the most of any player in a season-opening game since assists began being kept during the 1971-72 season.

Adebayo consistently improved as the season went along. He became an inside force for UK’s guard-centric lineup. The Little Washington, North Carolina, native scored in double figures in 24 of his last 28 games and averaged 13.9 points and 7.4 rebounds per game during league competition. He has a team-high five double-doubles on the year with three coming among his last six games to conclude the regular season. En route to winning his first SEC Freshman of the Week honor of the season, Adebayo made history along the way. With back-to-back double-doubles against Missouri and Florida, Adebayo hauled in 15 rebounds in both games. He became the first Wildcat to register consecutive games with 15 or more rebounds since Jared Prickett on Feb. 6 and Feb. 9, 1994. It was the first time a UK player had consecutive games with 15 or more boards in league play since Sam Bowie on March 1 and March 3, 1984.

The three freshmen led the Wildcats in points, rebounds, assists, steals and blocks for the season in and helped guide UK to its 48th SEC regular-season title.

Kentucky returns to action in the opening round of the SEC Tournament on Friday. UK will take on the winner of Thursday’s Georgia-Tennessee game on Friday at 1 p.m. ET. The game is set to air live on the SEC Network.