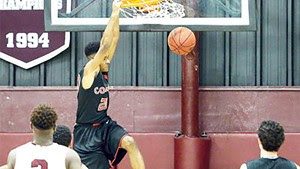 MOREHEAD, Ky. — Tada (TAY-da) Stricklen, a 6-foot point guard from Corinth, Miss., has signed a National Letter of Intent with the Morehead State men’s basketball program.
Stricklen, who will be a senior this season at Corinth High School, led his team to a 4A state championship as a sophomore and was immediately impressive to MSU head coach Preston Spradlin.

“Tada is a kid we were immediately attracted to because of his style of play and his love for the game,” Spradlin said. “He embodies everything we are trying to build here with our culture in this program.”

“Tada is a scoring guard who can make everyone around him better,” Spradlin added. “He will add to our lineage of having very good point guards at Morehead State and in the Ohio Valley Conference. I truly believe he will be an exciting player for our fans to get to know and to watch on the court.”

In addition to his high school accolades, Stricklen plays for the Da House AAU program from Corinth. He was rated one of the best performers at “Best of the South” and led his team to a win over Nike Team Florida.