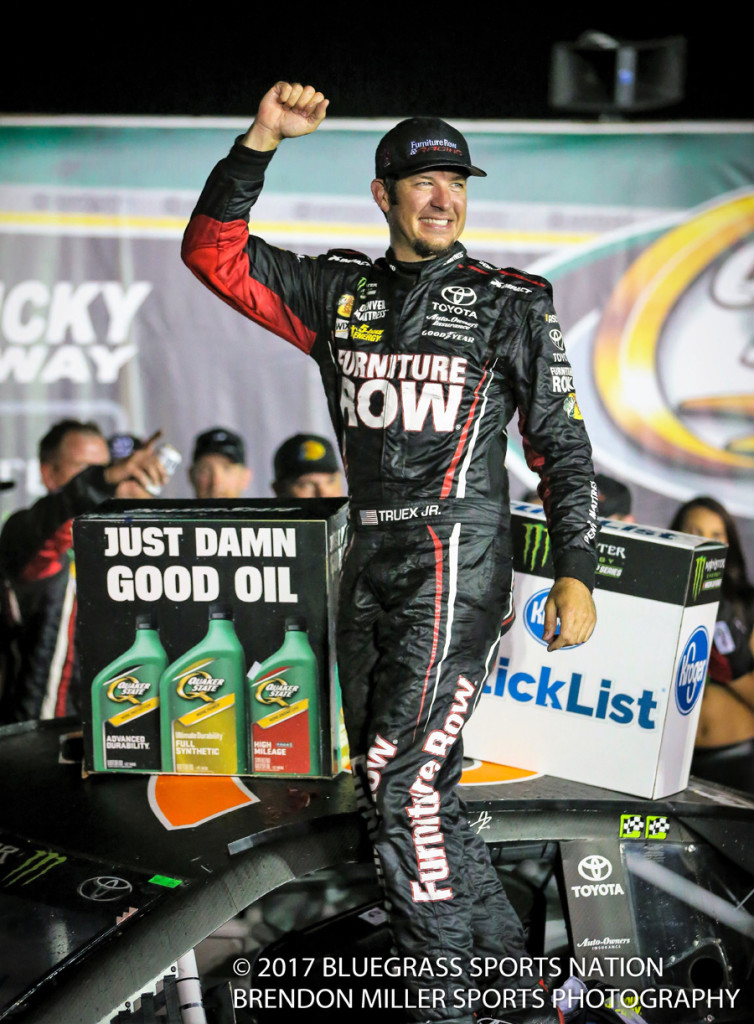 Martin Truex with the win – Photo by Brendon Miller

The race to the chase continued today at Kentucky Motor Speedway in Sparta, Kentucky. The seventh annual Quaker State 400 was held today, bringing in large crowds and some of the best drivers in modern day racing.  The race marked driver Dale Earnhardt JR. last time driving in Kentucky as it was announced earlier in the year that he was retiring from competitive racing at the end of the racing season.

Earnhardt comes from racing royalty as he is the son of the legendary Dale Earnhardt Senior, who died while racing the Daytona 500 in February, 2001.  The Quaker State 400 featured several huge names in the Racing Industry. Jimmie Johnson, Kyle Busch, Danica Patrick, Kevin Harvick and others all participated in the race.  Spectators and fans all cheered on their favorite drivers and teams, with drivers amazing the masses while reaching speeds of 190 MPH. The drivers are all some amazing athletes and the adrenaline they experience every race is an experience most people can only dream about. The event was attended by co- owner and lead photographer Brendon Miler and beat writer David Leveridge.

Chase Elliot driving the #24 NAPA Chevrolet Impala initially set the track record with a lap time of 28.59 seconds, but was short lived as Kyle Busch later beat his time and took the qualifying pole. Elliot’s time was deemed unofficial by race officials, but still impressive.

Kyle Busch’s domination continued in stage one of the Quaker State 400.  Busch led at two different times during the stage and was the leader in 66 of 80 laps.  Martin Truex Jr. was the only lap leader in stage 1 racing, leading the other 14 laps.  Martin Truex Jr would go on to win stage 1 of the race  driving the Furniture Row/ Denver Mattress Toyota Camry.  Kyle Busch ran a strong second place.  Kyle Larson who started the day in row 20 and in last place to qualify, raced his way into third place in the standings after stage 1.  Larson drove the #42 Target Chevrolet.  Kevin Harvick also advanced into the race standings, after starting the race in seventh place. Harvick finished stage 1 in fourth place.  Harvick was driving the #4 car a Busch Light Ford Fusion.  The top ten was rounded out by # 1 Jamie Mcmurray, # 20 Matt Kenseth, #11 Denny Hamlin, #77 Erik Jones, #48 Jimmie Johnson, and #24 Chase Elliot.  Fan favorite Dale Earnhardt Junior finished outside of the top 10 in 20th place.  Stage 1 featured one caution that lasted for four laps.

The second stage of the race began and the drivers started to feel more accustomed to the track.  Martin Truex Jr driving the #78 Furniture Row/ Denver Mattress Toyota Camry battled Kyle Busch the whole stage.  Watching the race it become evident that both Toyota’s were the strongest cars in the field.  Both cars were impressive and led the majority of the stage.  Truex who won stage one of the race finished in second place.  The new leader after stage 2 racing was #12 Ryan Blaney.  Blaney was very competitive in the race, but the duel between Truex Jr and Bush was exciting.

Stage two featured four cautions that lasted for eighteen laps.  The most severe caution happened on lap fourty-seven to lap fifty.  Four cars were involved in an accident on turn one, #11 Denny Hamlin, #33 Jeffrey Earnhardt, #16 and #32 all collided delaying racing action.

Stage three saw several of the biggest stars in racing, including Jimmie Johnson get eliminated from tonight’s racing.  Johnson lost control on turn #4 skidded into the wall and heavily damaged the right front fender.  Johnson immediately pitted and headed to the garage, his crew deemed the #48 Lowes car damage to be undrivable for the rest of the race.  Brad Keselowski another prominent driver also experienced heavy damage that ended his night of racing. The same incident involved both cars.  Johnson finished in last place and Keselowski finished directly in front of him in 39th place.

The final stage was the best racing of the night.  Stage three is the longest stage of the race lasting from lap #90 to lap #274.  Drivers had to pit multiple times in this stage of the race began to position their cars to not only advance in race standings, but in points standing that will get them into the chase for the championship.  Drivers were aggressive and took several risky chances to advance their cars. With Driver’s become excessively aggressive, wrecks and cautions were common in the last stage of racing.  Stage three had nine total cautions lasting thirty- nine total laps. Several house hold drivers were involved in incidents including the above mentioned Jimmie Johnson, Brad Keselowski, and Kasey Kahne along with Clint Bowyer.

On lap #274 of the race four cars were involved in an incident on the back stretch.  Austin Dillion #3, Trevor Bayne #19, Matt Kenseth #20, and Darrel Wallace Jr #43 got tangled up as each was trying to advance in race standing.  NASCAR has a rule that a race can’t end under caution and thus the cars were held under caution for 2 laps until the track was cleared free of debri and the damaged cars could get safely to pit row.  In the end Martin Truex Jr. would hold off a strong rally from Kyle Larson, Chase Elliot, Denny Hamlin, and Kyle Busch to win the Quaker State 400.

Truex’s win puts him in second place in points only trailing Kyle Larson by one point.  Updated top ten list courtesy of www.nascar.com