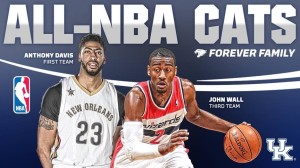 Cats in the NBA

LEXINGTON, Ky. – Anthony Davis is back at the top. John Wall is now considered among the elite. So say the 100 media members who voted for the annual All-NBA Teams, which the league announced Thursday.

Davis was named to the All-NBA First Team for the second time in his career while Wall made the All-NBA Third Team.

Former Kentucky men’s basketball stars Karl-Anthony Towns and DeMarcus Cousins nearly made the All-NBA Teams as well. Towns was the leading vote-getter not to make one of the teams with 50 votes. Cousins, who was tabbed to the All-NBA Second Team in 2015 and 2016, was just behind Towns with 42 votes.

The All-NBA Teams were chosen by a global panel of sportswriters and broadcasters.  The media voted for All-NBA First, Second and Third Teams by position with points awarded on a 5-3-1 basis. Voters were asked to select two guards, two forwards and one center for each team, picking players at the position they play regularly. Players who received votes at multiple positions were slotted at the position where they received the most votes.

In a career already defined by gaudy numbers, Davis put together his best one yet. The 2012 Kentucky basketball national champion averaged career highs in points (28.0) and rebounds (11.8) this season to go along with 2.2 blocks per game. He began the season with a 50-point, 15-rebound performance followed by a 45-point, 17-rebound day in his next game, setting the tone for a magnificent year. According to ESPN Stats & Info, he was the first player to score at least 90 points in the first two games of a season since Michael Jordan scored 91 to begin the 1986-87 season. He ended with 2,099 points, a Pelicans’ single-season franchise scoring record.

Among Davis’ eye-popping highlights this season was an All-Star Game scoring record of 52 points in addition to 10 rebounds en route to MVP honors in front of his home team’s crowd in New Orleans. Davis’ player efficiency ranking was ranked fourth in the league.

Wall, who just completed his seventh season in the NBA, has developed into one of the game’s best point guards. The Washington Wizards’ career franchise leader in assists and steals enjoyed the best season of his career in 2016-17, averaging career bests in points per game (23.1), assists per game (10.7) and steals per game (2.0) while leading the Wizards to within one win of the NBA Eastern Conference finals.

Kentucky’s first-ever No. 1 overall NBA Draft pick was among the league leaders in assists, steals and double-doubles (he led all Eastern Conference guards in the regular season with 50 of them). Wall will probably best be remembered this season for his game-winning 3-pointer vs. the Bostin Celtics in a must-win Game 6 of the Eastern Conference semifinals.

The NBA’s remaining 2016-17 award winners will be revealed during the inaugural NBA Awards on TNT June 26 at 9 p.m. ET at Basketball City in New York. The finalists for the awards will be unveiled during a special 90-minute edition of TNT’s NBA Tip-Off Friday at 7 p.m. ET.