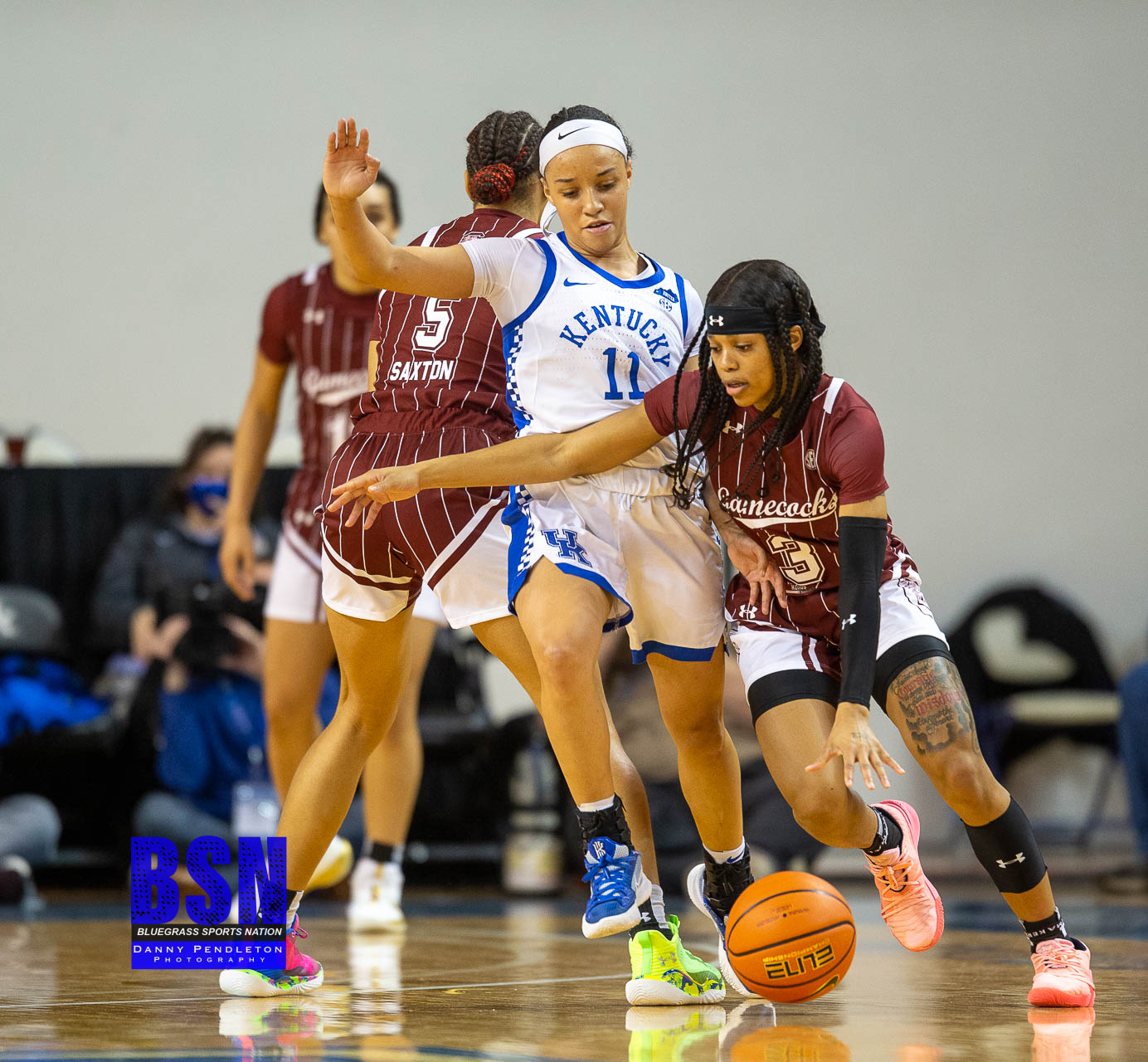 All-American Rhyne Howard scored 16 of her 21 points in the fourth quarter but the Kentucky women’s basketball team lost to top-ranked South Carolina 59-50 on Thursday night at Memorial Coliseum.

The Gamecocks seemed to put the game away early in the fourth quarter but Howard led a Kentucky rally that would come up just short in the end.

Howard made eight of her 15 shots from the floor, including four of five from behind the arc and one of three at the line for her 21 points. She added nine rebounds, four assists, four steals and a blocked shot. She was the only Wildcat in double figures.

The taller Gamecocks dominated the rebounding battle, 46-35, and had 21 second-chance points to just four for Kentucky. South Carolina also had 46 points in the paint, while Kentucky had just 26.

Kentucky (9-11, 2-8 SEC) missed its first seven shots from the floor and fell behind 6-0 early. The Cats got on the board when Dre’una Edwards made a layup with 5:51 left in the first quarter. The Gamecocks would get a basket to lead 8-2 before UK got a Nyah Leveretter layup, on a nice pass by Treasure Hunt, to cut it to 8-4.

South Carolina (22-1, 10-1) would score the next six points to lead 14-4 with 1:29 left in the first quarter. Kentucky would get baskets from Owens and Howard to cut the deficit to 14-8, but South Carolina’s Bree Hall hit a runner just before the buzzer to make it 16-8 Gamecocks after one period.

South Carolina scored the first five points of the third quarter to extend the lead to 31-17. Owens scored UK’s first points of the half, on a layup, to cut it to 31-19. But the Gamecocks answered by scoring the next four, forcing a Kentucky timeout with 5:17 left in the third period.

The teams would play evenly, 7-7, over the last five minutes of the third period to lead 42-26 with 10 minutes remaining.

In the fourth quarter, South Carolina would build its lead to as many as 18 and the game was seemingly over. The Gamecocks would lead 50-35 with 5:17 to go before Kentucky went on a run. The Cats assembled a 13-5 run to cut the South Carolina lead to seven, 55-48, with 1:30 remaining.

Kentucky returns to action on Sunday, visiting Tuscaloosa to take on Alabama. Tipoff is set for 2 p.m. ET and the game can be seen on the SEC Network.