No.11 CATS Dominate No.12 Aggies in SEC Showdown 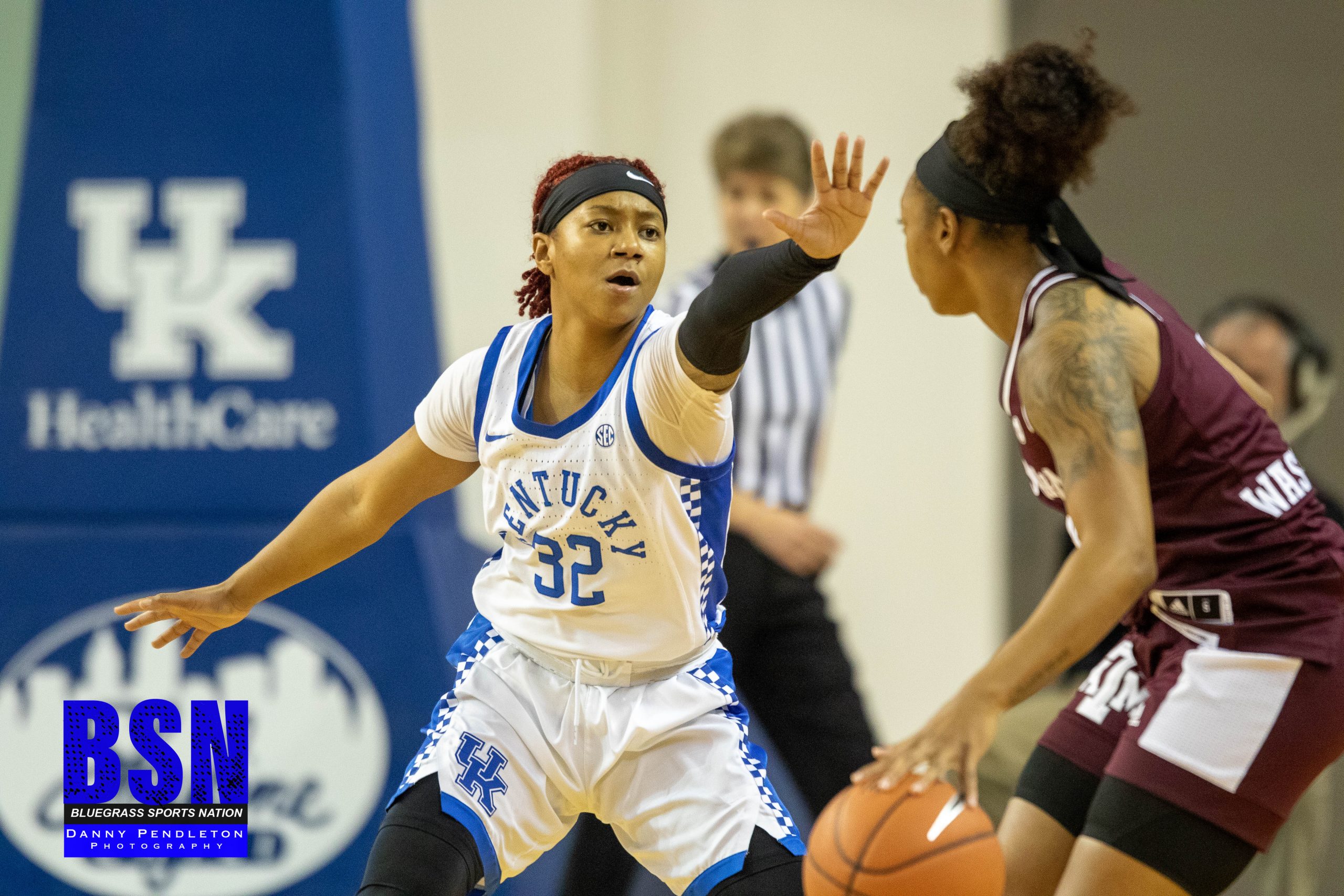 In Tuesday night’s marquee matchup, the No.11 Ranked Kentucky Wildcat’s (14-2) welcomed the No.12 ranked Texas A&M Aggies (14-2) to Memorial Coliseum for an SEC showdown.

Kentucky entered Tuesday night’s battle looking to not only stay hot after a dominating performance in Gainesville on Sunday, but to also pass the Aggies and claim 2nd place in the SEC, falling behind only the South Carolina Gamecocks.

Showing no signs of disappointment for the much-anticipated matchup, both teams came out scratching and fighting early, as it was a battle for every position in the first period of play.

While the effort was there for both squads, the baskets were not. Defense was what won the 1st period for the aggies as Kentucky shot a staggering 30% from the field and ended the period trailing 13-12.

While the 1st quarter might have been all about defense, the 2nd was far from it. The Cats found their stroke, and they found it in a hurry dropping in a pair of threes along with a couple of layups to force an Aggies timeout with 6:27 remaining and a 22-15 lead.

As much as Texas A&M wished the timeout helped, it just did not.

The remainder of the 2nd quarter was all Kentucky as the Aggies had no answer on either end of the court and allowed the Cats to finish the half with a 33-21 lead, their largest of the game to that point.

Kentucky tallied 5 threes and shot 53% while also turning up their defensive pressure to force the Aggies to shoot only 18% from the field and turn it over 6 times in the 2nd quarter.

Texas A&M was not to be put away quietly, but still had no answer for Sophomore Guard Rhyne Howard who had the hot hand and chipped in 6 points of her own in the 3rd period.

Led by their own defensive’s intensity that forced 2 more turnovers and Rhyne’s offensive explosion, Kentucky was able to sustain and end the period with a 49-40 lead.

As expected, when two top 15 teams meet, it was a fight until the very end, but maybe not as much of a fight as Aggie fans would’ve liked.

The final period had Kentucky written all over it, as the Cats were able to keep their defensive intensity up and began pouring in threes, shooting  5-6 from deep and 83% from the field in the quarter to leave the Coliseum with a commanding 76-54 victory over the No.12 ranked team in the country to improve to 15-2 on the season.

Kentucky was led by Howard who recorded her 3rd double-double of the season as she finished tallying 24 points 11 rebounds and 4 assists.  When asked after the game about her performance Rhyne stated that “We were just making sure we were having fun, things could always turn and not go our way, so we just try and have fun with it.”

“We had to fight hard for that one and I am extremely proud of the team for this big big win for us,” stated head coach Matthew Mitchell.

“Super proud of Blair on the great hustle and hard defensive work she gave us tonight…I think Texas A&M did a great job trying to control the tempo and it wasn’t until the fourth we were able to play at our pace and have a phenomenal quarter” Stated Coach Mitchell.

With the dominant performance over A&M, Kentucky improves to 15-2 on the season and takes the 2nd place role in SEC standings. The Cats will take the floor again this Sunday at 2pm in Baton Rouge against the hosting LSU Tigers.