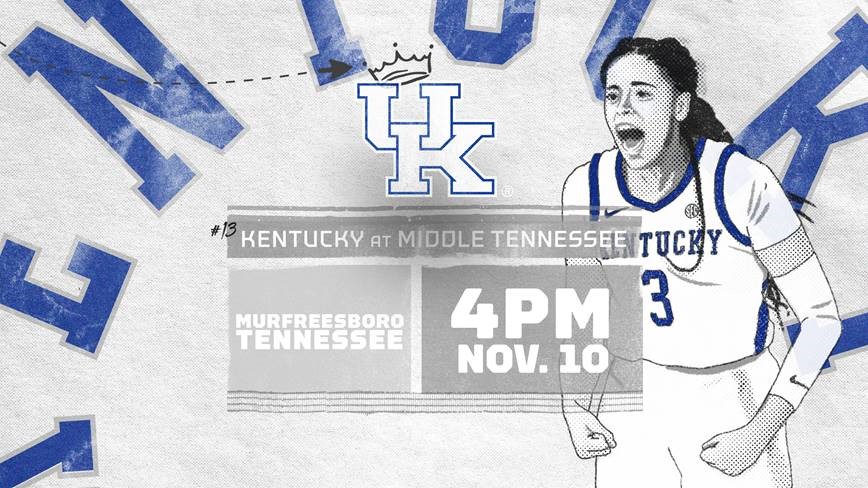 LEXINGTON, Ky. – A tough road test awaits the No. 13 University of Kentucky women’s basketball team Sunday as it travels to Murfreesboro, Tennessee, to square off against the Middle Tennessee Blue Raiders at 4 p.m. ET inside the Murphy Center.

The game will be streamed on ESPN+ and can be seen through WatchESPN on computers, smartphones or tablets. Darren Headrick will have the call on the UK Sports Network on 630AM WLAP in Lexington. Live stats and free live audio will be available online at UKathletics.com.

“We will have a tough test ahead of us with our first trip on the road this season against a very tough opponent and it is always a battle when we play Middle Tennessee State,” UK head coach Matthew Mitchell said. “They will be very well coached and pose a great challenge for us. We will have to prepare well and work really hard and see if we can strengthen ourselves to the best of our abilities to go down there and play a really tough early season matchup.”

Kentucky (1-0) is coming off a season-opening victory against Mount St. Mary’s on Tuesday inside Memorial Coliseum. It was not a typical shooting night for the Wildcats, who went just 22-for-66 from the field for 33.3 percent, including 6-for-22 from long range. Mitchell’s squad found a way, however, scoring 40 second-half points to grab a 67-44 victory over The Mount. It was the UK defense that shined in the opener, limiting Mount St. Mary’s to just 15 field goals made – including just five 2-point field goals – while forcing 28 turnovers and scoring 29 points off those miscues. The Wildcats also grabbed 13 second-chance points and 11 fast-break points in the win.

Sophomore guard Rhyne Howard flirted with a quadruple-double in the game, scoring a game-best 14 points with 11 rebounds, five steals and five assists. The strong performance marked the 27th time in her short UK career she has scored in double figures and was the sixth double-double of her career. Two other Wildcats scored in double figures in the game with senior guard Jaida Roper going 3-for-3 from the field and 6-for-8 from the free throw line for 13 points, adding two assists and two steals. Junior forward Tatyana Wyatt scored 10 points with five rebounds and a block in just 16 minutes of play as she continues to get full strength after a preseason injury. Senior guard Sabrina Haines and freshman guard Emma King had strong UK debuts with each going for seven points. Haines added eight rebounds and King hit two 3s. Junior forward KeKe McKinney was key for the Cats, scoring six points with seven rebounds and three blocks.

Middle Tennessee started its season with a victory over East Carolina on Wednesday, defeating ECU 68-66 in a come-from-behind effort. The Blue Raiders held two exhibition games this season, defeating Bethel University (Tenn.) 64-53 on Oct. 27 before taking down Martin Methodist 89-63 on Nov. 1. The Blue Raiders went 23-for-54 from the field in the opener for 42.6 percent while they went 9-of-26 from long range. MTSU committed 27 turnovers against ECU, allowing the Pirates to score 27 points off those miscues. Middle Tennessee did win the rebounding battle 42-41, while the Pirates had 22 offensive rebounds and 14 second-chance points.

Kentucky leads the all-time series in games played against Middle Tennessee 16-5, including a 5-4 mark in games played in Murfreesboro. The Wildcats had won two straight games at the Murphy Center against the Blue Raiders before falling 62-57 on Dec. 28, 2017.  UK defeated MTSU last season 72-55 inside Memorial Coliseum and hold a 10-1 lead in the series in Lexington. The two teams have met every season 2008 with UK holding a 8-3 record during the stretch.