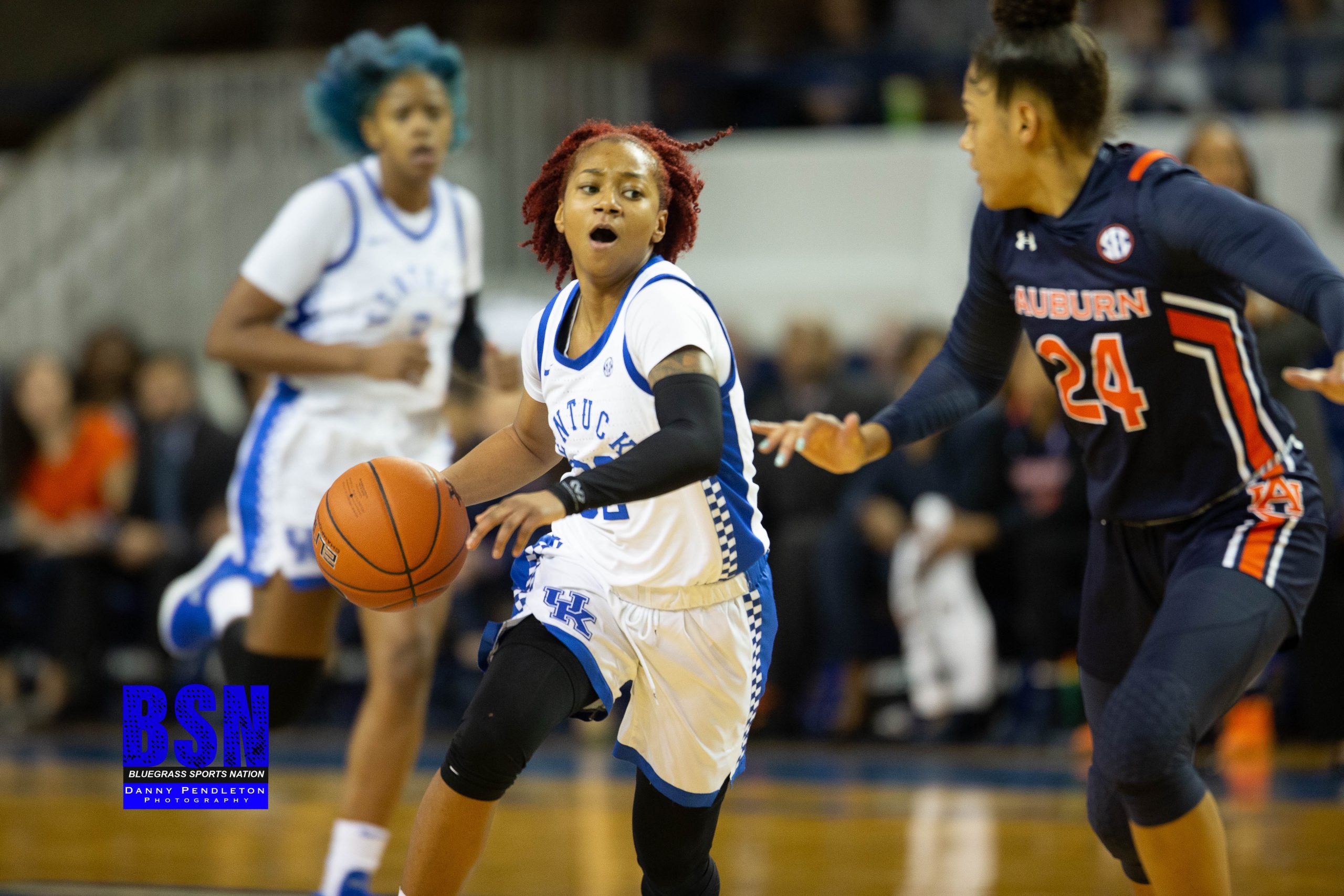 Kentucky (16-3, 5-2 SEC) got a career-high tying 13 points and eight rebounds from KeKe McKinney, who had missed the previous four games due to injury. The junior from Knoxville, Tennessee, made all six of her shots from the field, including her only three-point attempt.

Kentucky’s Rhyne Howard, who entered the game tied for second in the nation in scoring at 23.9 points per game, was held in check by the Tigers in addition to a third-quarter hand injury that limited her to 29 minutes in the game. The sophomore scored just 10 points, on three-of-13 shooting from the field.

Kentucky got off to a quick start in the game, thanks to a pair of threes from Blair Green that gave UK an early 6-2 advantage. Auburn would get on a 7-2 run to take its first lead, 9-8, with 6:50 to play in the first. Kentucky would answer with a 9-2 run of its own, including a three from Haines and a jumper by McKinney, to lead 17-11 with 4:33 left in the period.

From there, neither team would score for over three minutes, a streak that was stopped when McKinney hit a runner in the lane with 1:21 to play in the first. Auburn answered with an Annie Hughes fast break layup before Haines hit a jumper with 42 seconds left in the period, which ended with the Cats ahead 21-13.

Auburn scored first in the second period when Erin Howard hit a three from the top of the key to cut the UK lead to 21-16. But the Cats went on yet another run, this one 9-2, to grab a 30-18 lead with 6:43 left in the half. UK’s Howard had a three of her own during the run, as did Haines.

After Auburn’s Unique Thompson made a layup to cut the UK lead to 30-20, the Cats ran off seven straight points, capped by a left-side three from Tatyana Wyatt, to lead 37-20 with 4:47 to play in the half. The Cats would hold a 44-28 advantage at the half. The Cats forced 15 Auburn turnovers in the first half and scored 16 points off those mistakes. Haines and McKinney led the Cats with eight points apiece in the first half.

Auburn scored the first 12 points of the third period to cut the UK lead to 44-40. Thompson scored six straight points in the run that got the Tigers back into the game. Meanwhile, Kentucky missed its first eight shots of the period while committing five turnovers. And things got worse for the Cats in the period when Howard, the team’s leading scorer on the season, left the game with a finger injury with 3:08 to play in the quarter.

The Cats finally got on the board when Haines hit a free throw with 2:28 to play in the period. After Auburn got a basket from Dasia Alexander to cut the lead to 45-42, Haines drilled a three from the left side to extend the UK lead to 48-42 with 1:56 to play in the period. And on Kentucky’s next possession, Haines was at it again, hitting another three to give UK a 51-42 lead with 1:25 left in the quarter. But the Tigers scored the final five points of the period to cut the UK lead to 51-47 with 10 minutes left to play.

The Tigers scored the first four points of the fourth quarter to tie the game at 51-51. But Kentucky responded with five points in a row, including a three-pointer from Amanda Paschal, to lead 56-51 with 7:03 to play. After Auburn got a basket from Thompson, it was McKinney hitting a big three from the corner to extend the Kentucky lead to 59-53.

But as they did the entire second half, Auburn fought back, scoring five in a row to cut the UK lead to 59-58 with 3:55 to play. That’s when Howard, who had just come back into the game, hit a running, left-handed shot in the lane to extend the UK lead to 61-58 with 3:32 left.

Auburn got a basket from Thompson to cut the UK lead to 61-60 with 3:02 left in the game. Neither team scored again until Roper hit a pair of free throws with 1:24 left in the game to give UK a three-point lead.

On Auburn’s next possession, Thompson was fouled and made one of two at the line to make it 63-61 with 54.6 seconds to play.

Howard was fouled by the Tigers with 29.6 seconds to play and, with a bandaged left hand, the sophomore made both charity tosses to make it 65-61.

After an Auburn timeout, Howard stole the Tigers’ inbounds pass and was fouled. Howard made one of two from the line.

Kentucky returns to action on Thursday, visiting Missouri in Columbia. Tipoff is set for 7 p.m. ET and the game can be seen on the SEC Network.