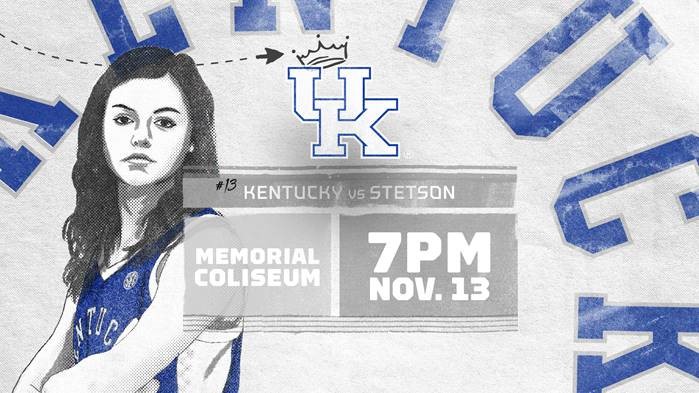 LEXINGTON, Ky. – (UK Athletics) Fresh off an impressive road win at Middle Tennessee on Sunday where the Wildcats scored a program-record 31 points in the third quarter to take control of the game, the No. 13 University of Kentucky women’s basketball team returns home Wednesday to play host to the Stetson Hatters at 7 p.m. ET inside historic Memorial Coliseum.

Young fans are encouraged to take advantage of the Kid Zone pregame with games, poster making stations, coloring stations and more. Freshman guard Emma King from Stanford, Ky., is scheduled to sign autographs on the concourse following the game.

The game will be streamed on SEC Network+ with Jeff Piecoro and Christi Thomas on the call. The action can also be seen through WatchESPN on computers, smartphones or tablets. Darren Headrick will have the call on the UK Sports Network on 630AM WLAP in Lexington. Live stats and free live audio will be available online at UKathletics.com.

Kentucky (2-0) is coming off a strong road win at Middle Tennessee on Sunday, taking down the Blue Raiders 67-52 behind a strong second-half performance. UK struggled to find its offensive rhythm in the first half, scoring just 22 points on 7-of-28 shooting from the field. The Wildcats came out of the halftime locker room on fire, starting the second half on a 13-0 run to take control of the game. UK scored 31 points in the third quarter – a program record for most points scored in the third quarter. UK went 13-of-20 from the field in the third stanza, including 4-of-5 from long range. The Wildcats had a 20+ lead much of the second half before finishing with a 15-point victory.

Stetson comes to Lexington with a 1-0 record after defeating Palm Beach Atlantic to start its season last week. SU took down the Sailfish, 77-46 at home. The Hatters will make a weekend out of their trip to the Bluegrass State as they will make the short trip to Morehead following Wednesday’s game to play in the Morehead State Eagle Invitational. That event starts with Stetson vs. Morehead State on Friday followed by Stetson vs. Saint Francis on Saturday.

Last season, Stetson went 16-16 finishing second in the ASUN with a 11-5 record. The Hatters return three starters from that team and six total letterwinners. Stetson welcomes 10 transfers to the team this season in five transfers and five true freshman. Banks and Vincent are the top returners for the Hatters with Banks averaging 14.9 points per game and 6.6 rebounds per game last season while Vincent averaged 8.1 points and 6.0 rebounds.

This is the third all-time meeting between Kentucky and Stetson in women’s basketball with Kentucky winning both of the first two games.  The first all-time meeting came Dec. 20, 1989 when the Wildcats traveled to DeLand, Florida, to defeat the Hatters 93-58. SU made its first trip to Lexington Nov. 22, 2005 with the Wildcats earning a 84-38 victory. Kentucky is 7-1 all-time against teams that make up the current alignment of ASUN.