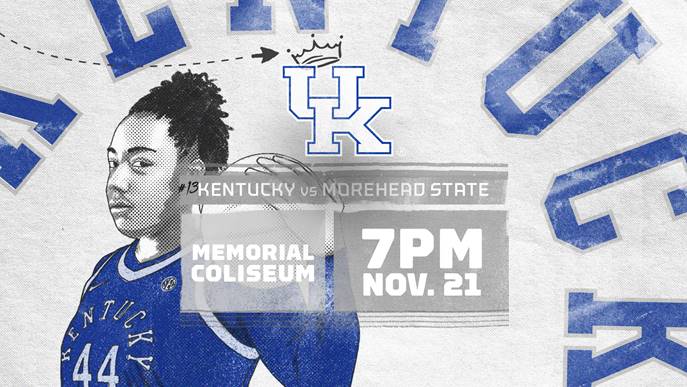 Wildcats and Eagles will tip at 7 p.m. ET inside historic Memorial Coliseum

LEXINGTON, Ky. – After two tough road games the first two weeks of the season, the No. 13 University of Kentucky women’s basketball team returns to Memorial Coliseum on Thursday at 7 p.m. ET vs. Morehead State to start a seven-game home stretch that spans nearly a month. The homestand concludes with back-to-back games inside Rupp Arena against Winthrop (Dec. 11) and No. 8 Louisville (Dec. 15).

UK Athletics is proud to honor all active and reserve members of the armed forces along with police, firefighters and first responders at the game Thursday as it is Heroes’ Day in Memorial Coliseum. In honor of Heroes’ Day, $3 general admission tickets are available through ticketmaster.com when using the promo code HEROES. Season tickets are available in upper-level reserved chairbacks (sections AA-JJ), lower-level reserved bleachers (sections R-Z) or general admission bleachers (sections RR-ZZ) for $69 per ticket.

Young fans are encouraged to take advantage of the Kid Zone pregame with games, poster making stations, coloring stations and more. Sophomore forward Dre’una Edwards from Las Vegas, Nevada is scheduled to sign autographs on the concourse following the game.

The game will be streamed on SEC Network+ with Jeff Piecoro and Dick Gabriel on the call. The action can also be seen through WatchESPN on computers, smartphones or tablets. Darren Headrick will have the call on the UK Sports Network on 630AM WLAP in Lexington. Live stats and free live audio will be available online at UKathletics.com.

For the ninth time under head coach Matthew Mitchell, including the third straight season, the Wildcats have started the year with four straight wins. UK’s best start under Mitchell is 11-0, which the squad has accomplished three times. Kentucky is currently ranked No. 13 in the Associated Press Top 25 after starting its season ranked or receiving votes for the 11th time under Mitchell.

It has been a tale of two halves for Kentucky this season as UK is shooting 31 percent from the field in the first half, including 21 percent from 3, but in the second half, UK is shooting 38 percent from the field and 33 percent from 3. UK’s 50-47 win at Virginia marked the first time UK has scored 50 points or fewer in a win since defeating Louisville on Dec. 2, 2012. UK scored 48 points in that game. Kentucky has forced every opponent this season into 20 turnovers or more, including forcing a season-high 28 turnovers vs. Mount St. Mary’s. The Wildcats have forced 93 total turnovers this season and scored 90 points off those miscues amassing 36 percent of its total scoring.

Morehead State enters Thursday’s game with a 2-2 record. The Eagles lost their first two games of the season at Bowling Green and vs. Stetson before winning its last two games vs. Saint Francis (Pa.) and Midway (Ky.). In its last outing vs. Midway on Tuesday, Morehead State scored a season-best 107 points while limiting MU to just 55 points. Freshman guard Tomiyah Alford and junior guard Alyssa Nieves each scored 20 points in the game with Alford adding seven rebounds. Freshman guard Ariel Kirkwood scored 16 points with nine rebounds while senior forward Jaleesa Avery had 13 points and junior guard Lakeita Chappel had 10 points.

Kentucky leads the all-time series in games played against Morehead State, 31-4, including a 21-1 mark in games played in Lexington. The Wildcats have won 14 games in a row against the Eagles and the two teams have played 10 of the last 11 seasons. The Wildcats and Eagles played last season in Memorial Coliseum on Nov. 28 with Kentucky earning a 87-57 victory. UK scored 52 points in the first half to take control of the game with a 52-23 lead at halftime. The game was more even in the second half with UK only outscoring the Eagles, 35-34. Maci Morris led Kentucky in the game with 31 points, going 12-of-20 from the field and 4-of-8 from long range. Rhyne Howard had 17 points in the game with 10 rebounds, while Jaida Roper scored 14 points – going 10-of-10 from the free-throe line – while KeKe McKinney scored 13 points with six assists. UK shot 46 percent from the field in the game, forcing MSU into 25 turnovers and scoring 38 points off those miscues.