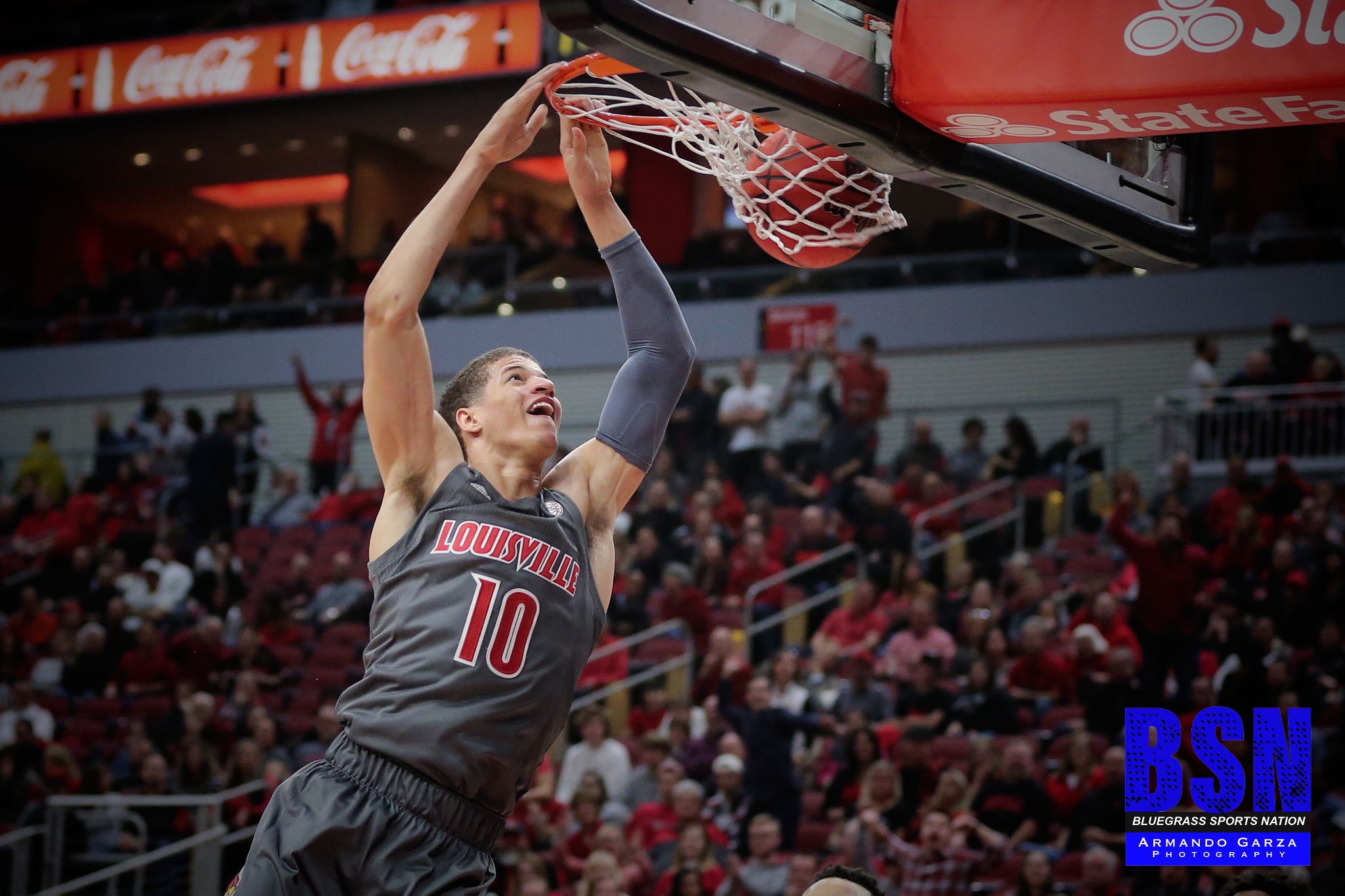 SOUTH BEND, Ind. (GoCards.com) — Jordan Nwora led three Louisville players in double figures with 20 points as the No. 13 Cardinals withstood a furious Notre Dame comeback in the second half for a 67-64 Atlantic Coast Conference victory Saturday.

Reserve guard Ryan McMahon scored 17 points and Dwayne Sutton had a double-double of 10 points and 14 rebounds for the Cardinals (13-3, 4-1 ACC) who won their second straight. Sutton hit a pair of key 3-pointers late as Louisville rallied in the final 4:05.

John Mooney had his 10th straight double-double and 13th of the season, finishing with 15 points and 19 rebounds for the Fighting Irish (10-6, 1-4) who lost their second straight. T.J. Gibbs also had 15 points and reserve Dane Goodwin added 14.

Trailing by as many as 16 points in the first half, Notre Dame opened the second with an 11-1 run. Mooney’s 3-pointer brought the Irish within 36-29 early in the half and then Goodwin hit a pair of 3-pointers to cut the Louisville lead to 37-35.

McMahon re-entered the game, and he and Nwora hit 3-pointers to give Louisville an edge, but the Irish kept coming and Goodwin’s third 3-pointer gave them a 55-53 lead with 7:04 left.

A Goodwin follow of a Prentiss Hubb miss made it 59-55 Irish with 5:25 left as Louisville missed six of seven shots. But an 11-3 Louisville run, fueled by two 3-pointers by Sutton, sealed the victory.

McMahon, who started the first 13 games of the season, entered the game at 14:29 and broke the tie with a baseline drive and underhand scoop reverse lay-in. He then added an uncontested drive the next time down the floor for a 15-11 Louisville lead, forcing Notre Dame coach Mike Brey to call a timeout.

McMahon, who had 12 points to match Nwora in the opening period, added a pair of 3-pointers and another scoop layup with 5:29 to play in the half to put the Cardinals up 30-14, their biggest lead of the period.

It might have been worse for the Irish if not for Mooney, who had 10 rebounds in the first 11 minutes on his way to 13 in the first half. His dunk off an inbound pass from Hubb with 38 seconds remaining gave him a first-half double-double.

BIG PICTURE
Louisville: The Cardinals had an 18-3 edge in bench points in the first half thanks to McMahon’s 5-of-9 shooting. Nwora, the ACC scoring leader coming in, had his 12 points on 4-of-7 shooting. He entered the game with 313 points in 15 games, the best by a Cardinal in the last 20 seasons.

Notre Dame: The Fighting Irish continued their shooting struggles. Guards Hubb, Gibbs and Rex Pflueger were a combined 3 of 13 (23%) in the first half as Louisville seemed content to allow Mooney to get his points and rebounds.

UP NEXT
Louisville: Cardinals continue their road trip Tuesday at Pittsburgh.