No. 14 Cats Come Up Just Short, Falling to No. 7 Louisville 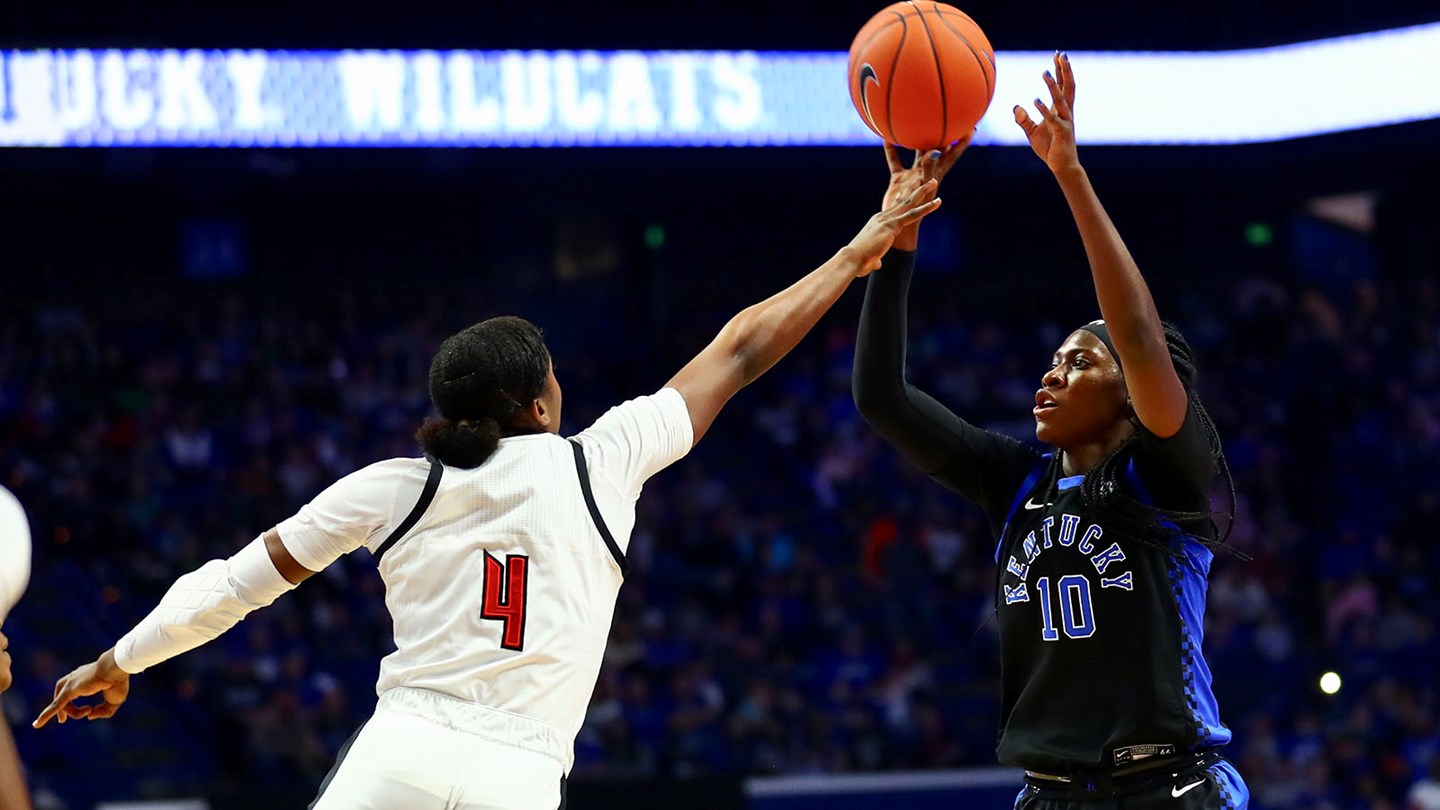 LEXINGTON, Ky. – Rhyne Howard scored 26 points, but her last-second three-pointer came up just short as the 14th-ranked Kentucky women’s basketball team lost to No. 7 Louisville 67-66 on Sunday at Rupp Arena.

Kentucky (10-1) got 12 points from both Sabrina Haines and Tatyana Wyatt in the game, along with nine points from KeKe McKinney.

The Cards scored first before a Haines three-pointer gave the Cats a 3-2 lead. However, Louisville scored the next six points to grab an 8-3 advantage. The Cards would lead 11-5 before the Cats scored five in a row to cut the lead to one, 11-10. After a Louisville basket made it 13-10, Howard drilled a three from the left side to tie the score at 13 apiece.

Kentucky would get the lead back less than a minute later when McKinney hit her second three-pointer of the quarter to give UK a 16-15 advantage. However, Louisville closed the period on another 6-0 run to take a 21-16 lead after the first quarter.

Kentucky opened the second period on a 7-2 run to tie the game at 23-23. The game was tied at 25 apiece when Haines hit a three from the left wing while being fouled. The senior from Phoenix converted the four-point play to give the Cats a 29-25 advantage with 5:07 left in the half.

Louisville would cut UK’s lead to 31-27 before the Cats closed the period on a 9-4 run, on six points by Howard and a three from Blair Green, as the Cats took a 40-31 lead to the break. Howard led all scorers with 20 points in the first half and Haines had seven for the Cats.

In the third period, Louisville came out hot, hitting six of its first eight shots to cut the Kentucky lead to four, 49-45. But Wyatt, as she did for most of the third period, had an answer, nailing a three to extend the UK advantage to 52-45 with 4:12 left in the period. Haines followed with a three of her own to give UK a 55-45 lead with 3:14 left in the third.

But the Cardinals responded like the top 10 team that they are, scoring 13 straight points to close the period. U of L would take a 58-55 advantage into the fourth period, despite 10 third-quarter points from Wyatt.

Both teams struggled from the floor early in the fourth quarter. The Cards missed their first four shots, while the Cats missed their first three. But Kentucky got a pair of free throws from Jaida Roper to cut the U of L lead to 58-57 with 7:01 to play. Louisville then made consecutive baskets to lead 62-57 with 5:21 remaining. That’s when McKinney struck again, making a three from the corner to cut the deficit to 62-60 with 4:52 left.

On Kentucky’s next possession, Haines was fouled while shooting from behind the arc, and was awarded three free throws. Haines missed the first, but made the last two, cutting the lead to one, 67-66, with 1:33 to play.

After each team turned the ball over, U of L’s Dana Evans missed a three with 15 seconds to play, giving the Cats one final possession with a chance to win. But Howard’s three-pointer came up short and the Cards held on for the win.

Kentucky returns to action on Saturday, visiting Berkeley to face California. Tipoff is set for 7 p.m. ET and the game can be heard on the UK Sports Network.