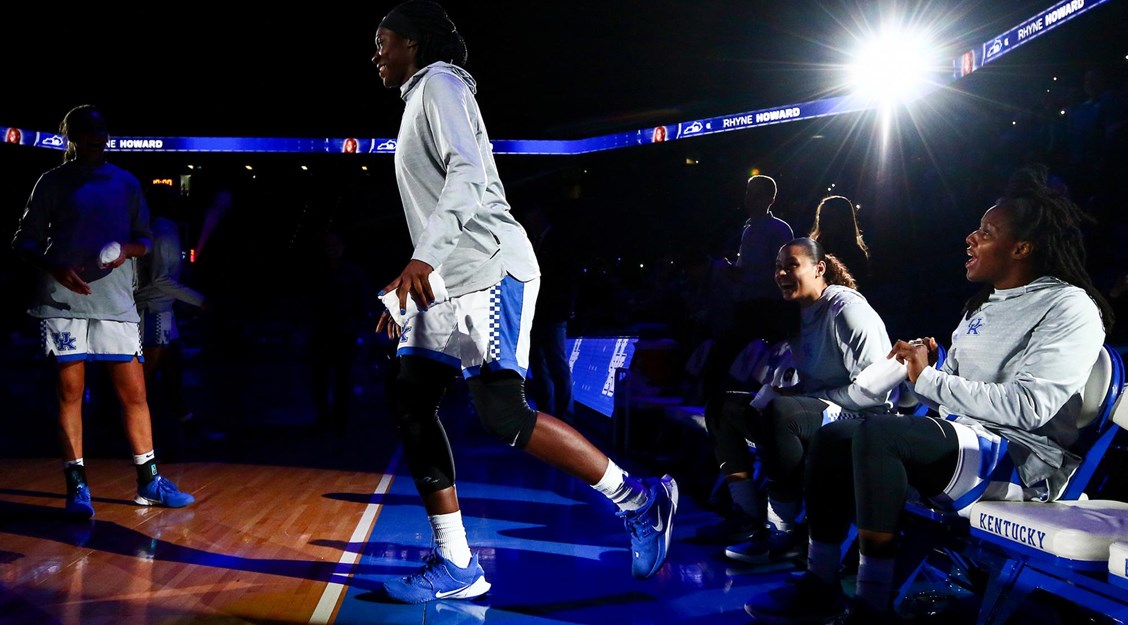 LEXINGTON, Ky. – The No. 14 University of Kentucky women’s basketball team will conclude what has been a successful seven-game homestand Sunday when it faces in-state rival No. 7 Louisville for a 1 p.m. ET tip inside Rupp Arena. Kentucky fans are encouraged to wear blue to the game and free pom poms will be given out while supplies last.

Fans can purchase $3 tickets for the game by using the promo code UKWBB19 at UKathletics.com/tickets. UK students get into all Kentucky women’s basketball games free of charge with a valid UK Student ID, while UK faculty and staff get in free plus up to three guests with a valid UK ID. UK students that check into the event with a completed BBN Rewards profile will receive a chance to win $10,000.

Beth Mowins, Debbie Antonelli and Brooke Weisbrod will have the call on ESPN.  The action can also be seen through WatchESPN on computers, smartphones or tablets. Darren Headrick will have the call on the UK Sports Network on 630AM WLAP in Lexington. Live stats and free live audio will be available online at UKathletics.com.

Kentucky (10-0) is off to its second best start under Matthew Mitchell, who has led the Wildcats to start 10-0 or better five times in his tenure. UK is coming off arguably its best performance of the year, defeating Winthrop 91-36. On top of earning a season high in points scored, UK hit 13 3-pointers – 11 in the first half alone, which tied a program record for most 3s made in the first half – and shot over 50 percent from the field for the second straight game. Senior guard Jaida Roper was the star for Kentucky in the game, scoring a career-high 30 points on 12-of-13 shooting with four assists. The strong showing from the field was the third-best field goal percentage for a UK player in a game in program history (minimum 10 attempts). Four other Wildcats scored double figures in the game, including a career-high tying 13 from sophomore guard Blair Green.

Louisville enters Sunday’s game with a 9-1 record and ranked seventh in both the Associated Press Top 25 and USA Today/Coaches Top 25. The Cardinals started the year with eight straight wins, including topping No. 1 Oregon in the Paradise Jam in late November that moved them up to No. 2 in the national rankings. In its following game, UofL lost at Ohio State, 67-60. Louisville got back in the win column in its last outing, winning at Northern Kentucky 85-57 on Sunday, Dec. 8.

Kentucky leads the all-time series in games played against Louisville, 34-21, including a 22-5 mark in games played in Lexington. UofL has won three straight meetings, including the last game played in Lexington – a 87-63 win in Memorial Coliseum on Dec. 17, 2017. This is the fifth time the two teams have met in Rupp Arena with the series tied 2-2. The last meeting in Rupp Arena was on Dec. 10, 2015 with UK winning 72-54.

Last season, the two teams played at the KFC Yum! Center with UofL winning 80-75. Howard had a double-double with 25 points and 10 rebounds, while five Louisville players scored in double figures led by Asia Durr, who had 32 points. Jones had 12 points, while Evans had 10 points.

Kentucky holds a 28-18 all-time record at Rupp Arena, including an 9-9 mark under Matthew Mitchell. Last year, UK won both of its games in Rupp Arena defeating Virginia 63-51 and Florida 62-51. UK has played at least one game in Rupp Arena each of the last nine years. This is the third straight year Kentucky has played two or more games in the historic venue.