No. 14 Kentucky Falls to No. 1 South Carolina 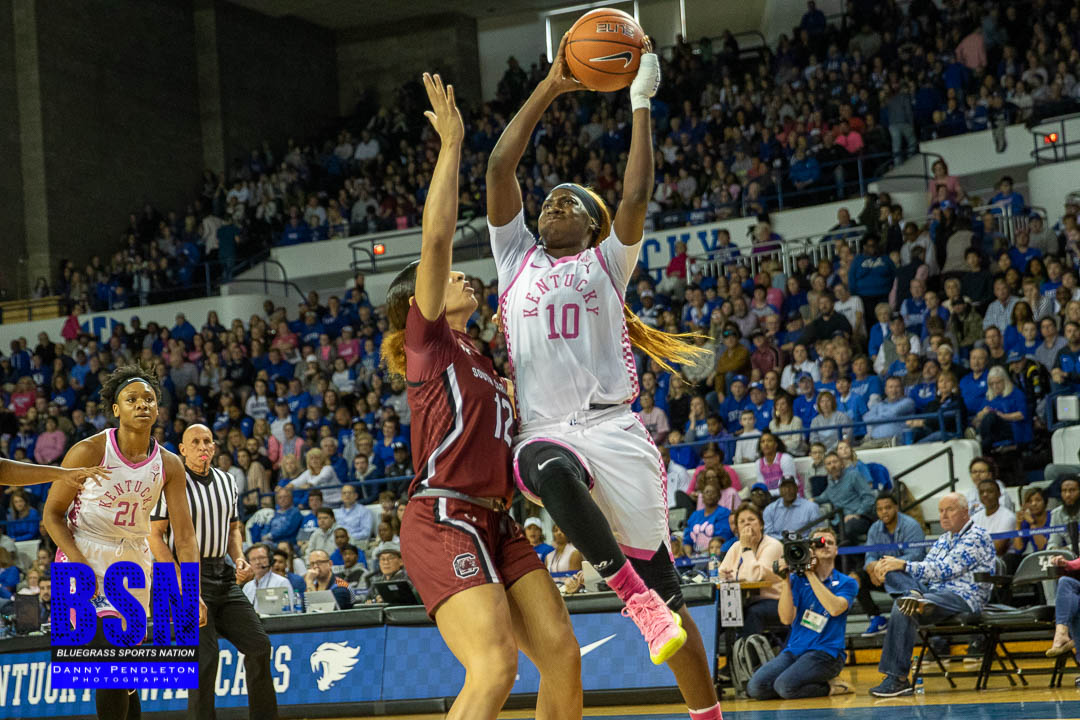 No. 14 Kentucky Falls to No. 1 South Carolina

Facing one of the nation’s best defensive teams, Kentucky struggled on offense in Sunday’s contest. The Wildcats made 16 of 54 (29.6 percent) of its shots from the field, including six of 15 (40 percent) from beyond the arc.

Kentucky (20-6, 9-5 SEC) turned the ball over 12 times and forced 12 turnovers in the game. South Carolina dominated points in the paint, with a 38-14 advantage in that category.

Kentucky scored first when KeKe McKinney nailed a three from the corner just 28 seconds into the game. After South Carolina got a basket from Aliyah Boston, Howard hit a pair of free throws to build the UK lead to 5-2. The Gamecocks would get a baseline jumper from Mikiah Herbert Harrigan to cut the lead to one before the Cats got consecutive baskets from Howard and Jaida Roper to grab a 9-4 advantage.

South Carolina would score the next six points to lead for the first time, 10-9, but Amanda Paschal’s jumper gave UK an 11-10 lead just 23 seconds later. A pair of Howard free throws gave the Cats a 13-10 lead, but a 17-1 South Carolina run, including 15 straight points, gave the Gamecocks a 27-14 lead after one period of play.

The Gamecocks scored first in the second period on a runner by Lele Grissett before Paschal hit a jumper to put an end to the run and make the score 29-16. After South Carolina’s Zia Cooke hit a pair of free throws to extend the lead to 31-16, Kentucky scored nine in a row on a layup by Howard, a three from McKinney and a pair of layups by Ogechi Anyagaligbo, to get within six, 31-25, with 4:47 left in the half.”

After three consecutive South Carolina free throws, Howard hit a left-side three to get the Cats within 34-28 with 2:58 left in the half. But the Gamecocks would close the half on a 6-2 run to take a 40-30 advantage into the break. Howard led all scorers with 12 points in the first half.

South Carolina started the third period on a 5-1 run to lead 45-31. But Kentucky would hang tough, getting back within 10 at 47-37 with 5:05 to play in the quarter. After Herbert Harrigan hit a pair of free throws, Roper was fouled on a three and hit all three charity tosses to get the Cats within nine, 49-40, with 4:37 to play in the third.

Kentucky scored first in the final period when Sabrina Haines hit a three from the top of the key. After South Carolina’s Destanni Henderson hit a runner, McKinney hit another three for the Cats, cutting the deficit to 61-49. From there, the two teams would go cold, with Kentucky missing eight straight shots while South Carolina missed six in a row.

South Carolina’s Harris ended that run with a driving layup that gave the Gamecocks a 63-49 lead with 4:14 to play. Howard would keep the Cats within striking distance, making four straight free throws to make it 63-53 with 2:32 to play.

UK would get within eight, 63-55, on a pair of Nae Nae Cole free throws, but South Carolina had an immediate answer, on a driving layup by Cooke with 1:57 to play, that gave the Gamecocks a 65-55 advantage.

Kentucky returns to action on Thursday, hosting Georgia at Memorial Coliseum. Tipoff is set for 7 p.m. ET and the game can be seen on SEC Network Plus.