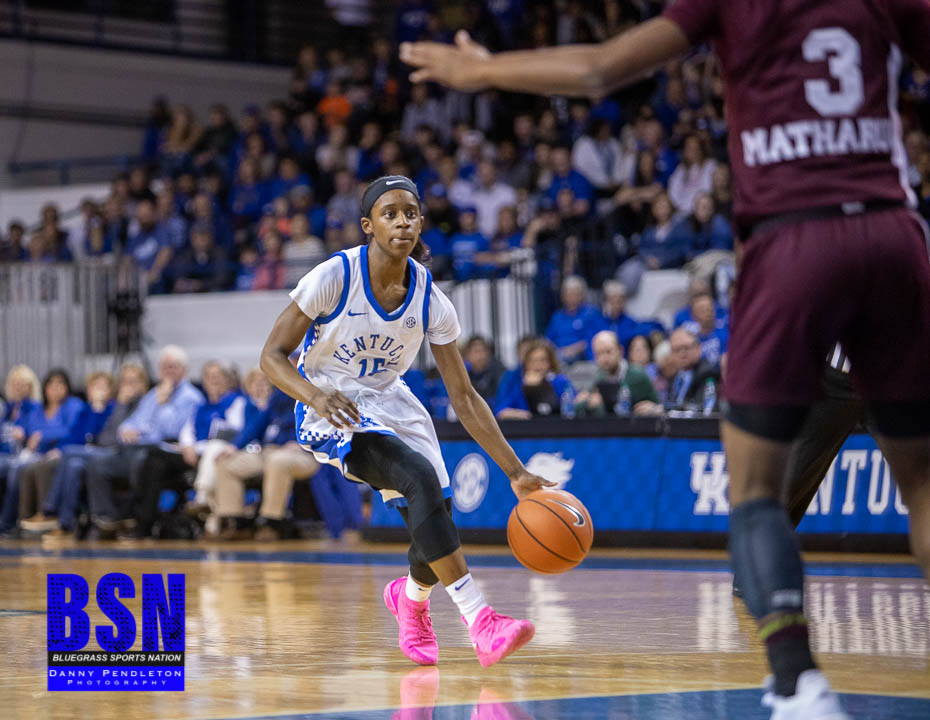 After a shocking 18-point loss in their last outing at Arkansas, Kentucky returned home to Memorial Coliseum and gained a massive win over the visiting No.6 ranked Mississippi Bulldogs to not only help their seeding position, but to also put the locker room back on track.

Looking to avenge a shocking loss from their last outing, the No.18 ranked Kentucky Wildcats returned home to Memorial Coliseum on Sunday as they played host to the visiting No.6 ranked Mississippi State Bulldogs for another SEC showdown.

Sunday night’s marquee matchup, which was aired on ESPN 2, and brought nearly 5,500 members of the Big Blue Nation to Memorial Coliseum were not to be disappointed by their team’s performance.

While it was a bit of a shaky start, Matthew Mitchell and his squad quickly got the game well within their own grasps.

Out of the gate the Bulldogs quickly went on a 6-0 run, jumping out to a 6-0 lead before Kentucky could use their first timeout with 8:30 remaining in the first period.

After the game, Mississippi State head Coach Vic Schaefer said it best, “Whatever Coach Mitchell said in that timeout to his girls worked a whole lot better than what I said to mine.”

After the timeout, the combination of defensive pressure and patience offense allowed the Cats to go on a run of their own and pushed the lead to as much as 10 before ending the quarter with a commanding 19-9 lead.

While Kentucky commanded the final minutes of the first period, the Bulldogs were not to go away without a fight.

Both teams took their turns going on runs and exchanging blows, and it wasn’t until the Cats went on a 2-minute scoring drought in the final minutes of the 2nd period that Mississippi St. was able to claw back and enter the half with Kentucky only leading 35-32.

Both squads shot a staggering 37% from the field in the first half, and even despite losing the rebounding battle 19-23 the Cats were still able to hang on to the lead.

The 2nd half was all Kentucky. All of it.

Kentucky came out in the 2nd half and had not only found their stroke, but turned up the defensive pressure to the max.

The Cats forced another 10 turnovers in the 2nd half and shot a much improved 52% from the field.

Even after all the positives swinging in Kentucky’s favor, the Bulldogs were still able to claw back and make it a 2-point game, but that was quickly shuttered by a 9-0 run for the Cats.

After it was all said and done, Kentucky was able to knock off the No.6 ranked Bulldogs with a dominant 73-62 victory in Lexington.

Post-game Kentucky head coach Matthew Mitchell said how proud he was of his team stating that “I knew and we talked about how if we did not have everyone come together and each be a piece of this puzzle then we were not going to win this game, and I am very proud of my team and my girls for getting it done tonight.”

The Cats were led in scoring by Sophomore guard Rhyne Howard. In just her 2nd game back from injury and with a massive splint still on her left hand, the highly versatile guard was able to go for 26 points, 10 rebounds, and 2 assists in the outing.

Rhyne also surpassed 1,000 career points with her first basket in the 3rd quarter Sunday night. In doing so, she became the 2nd fastest player to ever do it in program history at Kentucky, trailing only Valerie Still.

With only a few weeks remaining before the SEC tournament, Kentucky improves to 19-5 on the season, and will take the floor again on Thursday night in Oxford, Mississippi against another SEC opponent in the Ole Miss Rebels.