No. 18 Wildcats, No. 6 Bulldogs Square Off Sunday in Memorial Coliseum 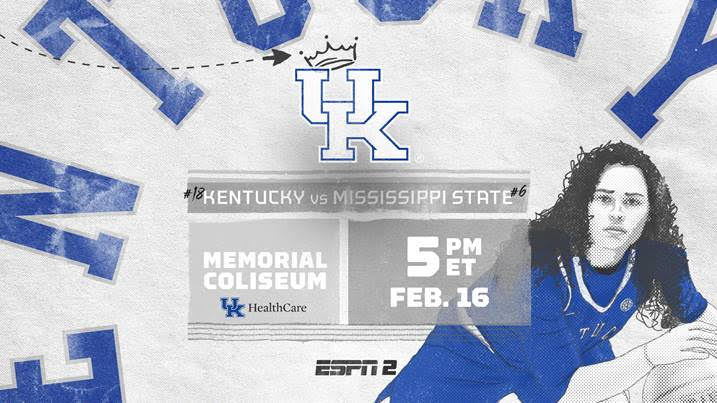 LEXINGTON, Ky. – Memorial Coliseum will be rocking Sunday when the No. 18 University of Kentucky women’s basketball team attempts to get back in the win column by welcoming No. 6 Mississippi State for a 5 p.m. ET tip in the historic venue. Free pom-poms will be given away to Wildcat fans and tickets are available online at ukathletics.com/tickets.

University of Kentucky employees receive free admission to Sunday’s game plus three guests with a valid UK ID. Single-game tickets are $10 (all ages) in reserved seating areas, while general admission tickets are $8 for adults and $5 for children (ages 6-18) and seniors (age 65+). Children aged 5 and under do not require a ticket in general admission areas. Young fans are encouraged to take advantage of the Kid Zone pregame with games, poster making stations, coloring stations and more. Senior guard Sabrina Haines is scheduled to sign autographs on the concourse following the game while former UK All-American Victoria Dunlap will be in attendance and honored during the game.

The game vs. Mississippi State will be broadcast on ESPN2 with Courtney Lyle and Carolyn Peck on the call. The action can also be seen through WatchESPN on computers, smartphones or tablets. Darren Headrick will have the call on the UK Sports Network on 630AM WLAP in Lexington. Live stats and free live audio will be available online at UKathletics.com.

Kentucky (18-5, 7-4 SEC) is coming off a tough loss at Arkansas last Sunday before having an open date this week. The Wildcats scored 85 points in the game but could not slow down the Arkansas offense, allowing the Razorbacks to score 103 points to grab a key Southeastern Conference win. UK did see the return of national player of the year candidate Rhyne Howard, who had missed the previous three games with a finger injury. Howard scored 20 points in the game as the Wildcats were led by junior guard Chasity Patterson, who scored a career-high 32 points going 11-of-18 from the field, 5-of-7 from 3 and 5-of-5 from the free-throw line. UK hit 11 3s in the game, but Arkansas went 14-of-21 from long range in the game, including 8-of-10 in the second half.

Mississippi State (22-3, 10-1 SEC) moved up several spots to No. 6 in the latest Associated Press Top 25 after back-to-back wins over top-25 ranked Tennessee and Texas A&M. The Bulldogs lone league loss this season came at No. 1 South Carolina, while its two out-of-conference losses are to highly ranked Stanford and West Virginia. Mississippi State is averaging 80 points per game this season while limiting opponents to 58.0 points per game.

Kentucky leads the all-time series in games played against Mississippi State, 27-21. The Wildcats also lead the series in games played in Lexington, 12-9. UK had won 11 straight meetings in the series before the Bulldogs have won each of the last four meetings. UK has won five of the last six meetings in Lexington while Matthew Mitchell is 12-5 against Mississippi State as UK’s head coach.