No Love for the Vols 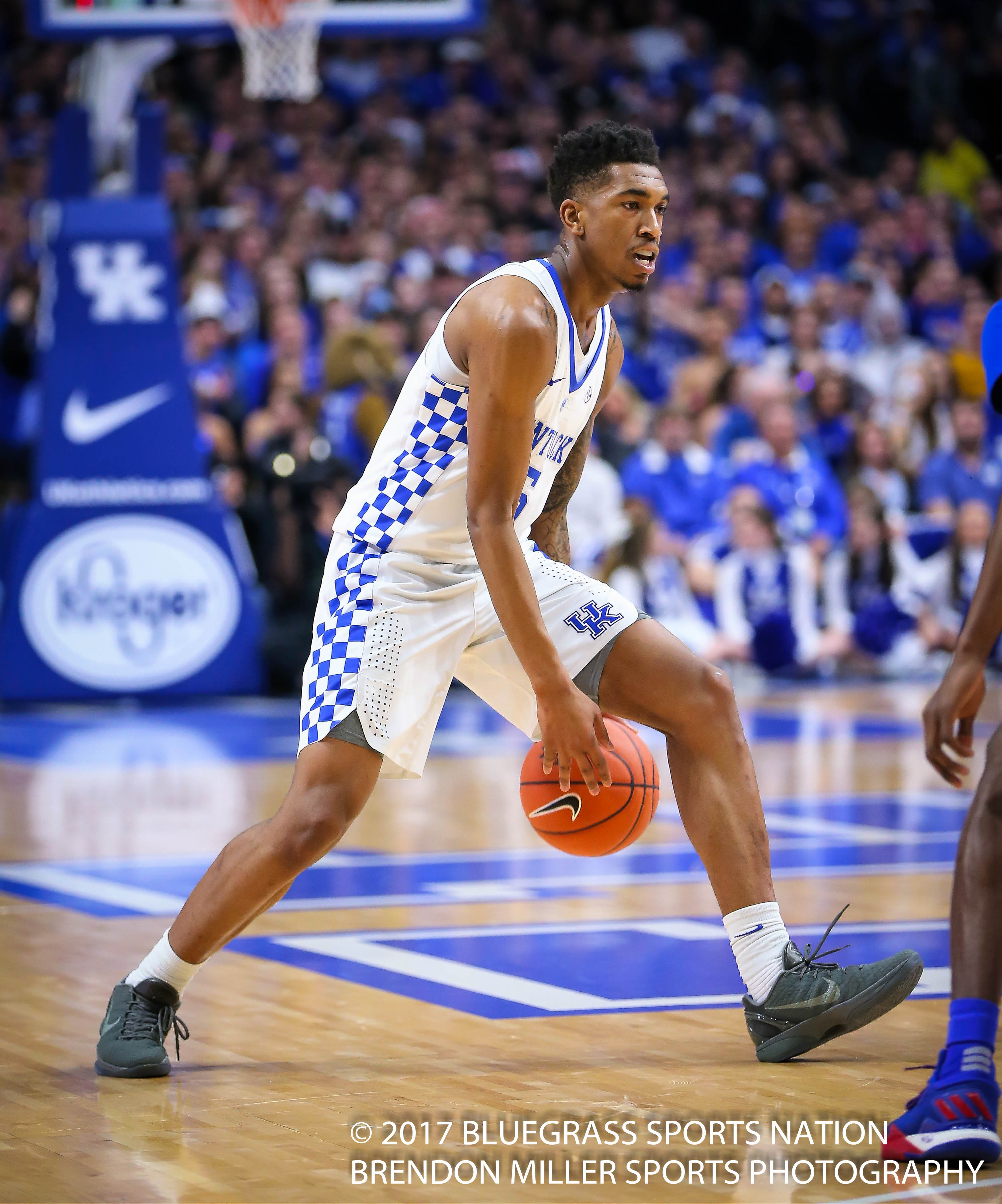 Lexington, KY – The Kentucky Wildcats put the Tennessee Volunteers away early in a Valentine’s Day matchup in Rupp Arena Tuesday night before a home crowd of 24,391 winning by a final score of 83-58.  It was their third win in a row improving their record to 21-5 overall and 11-2 in the SEC.

Tennessee took the early lead in the game that lasted until the 16:03 mark when Derek Willis hit his first three point basket of the game putting UK up 7-6, a lead which it never gave up the rest of the game.  That 3 pointer extended UK’s streak to 1,001 straight games with a made 3-point basket.  Willis quickly added 2 more three pointers to make the game 20-12, prompting Coach Rick Barnes to call a UT timeout with 10:50 to play in the half.  Out of that timeout UK went on another 11-3 run, going up 31-15 forcing the Vols into another timeout.

Both teams played pretty evenly the rest of the first half and UK went to the locker room at halftime with a 47-32 lead.  UK made 10, 3-pointers the first half, it’s most in a half this season.  The previous best was 8 made 3 pointers in a half on 2 other occasions.

Out of the locker room Briscoe scored the first four points of the second half, his first points of the game.  Tennessee pulled within 13 points at 53-40, but that was the closest they would get on the night.  De’Aaron Fox showed off his blazing speed on a steal that led to a fast break alley-oop for a Willis dunk and then again on another steal that he took the length of the floor for a layup.  The Cats led by as many as 28 points and showed no love for the Vols for most of the night.

Kentucky held Tennessee to it’s lowest point total of the season (53 points) and is now 13-0 this season when opponents score 72 points or less.  UK had 17 assists and only 7 turnovers.  The Cats outrebounded the Vols 43-35 and improves to 17-3 this year when they outrebound their opponents.

Malik Monk led the Cats in scoring with a game high 20 points, continuing his streak of double figure scoring in every game this season.  Monk also grabbed a career-high 8 rebounds.

Derek Willis finished the game with 16 points, with 12 points coming in the first half on 4 of 4 three pointers.  Coach Barnes said, “Well, again, our key was to not let their fourth shoot the ball and make good shots.” a strategy that didn’t work out too well for the Rocky Top coach tonight.

De’Aaron Fox and Isaiah Briscoe both had 6 assists with 13 and 12 points respectively.  Bam Adebayo led all rebounders with 12 rebounds, his fourth game with double digit rebounds this season.

Senior Dominique Hawkins played 24 minutes on the night, (more than Isaiah Briscoe) and scored a season high 10 points.  This is Dom’s second double-digit scoring game of his career here at UK.  Dominique commented after the game,  “I would just say that my time is coming.”  And it couldn’t come at a better time than now.  To go deep into the tournament Hawkins will need to step up and provide senior leadership over the next what is hoped to be 14 games.
The Cats are on the road for the next two games.  UK’s next game will be on Saturday when they travel to Georgia to take on a Bulldogs team that took them to overtime here at Rupp a couple weeks ago.  Game time is set for 6:00 p.m. and it will be televised on ESPN.