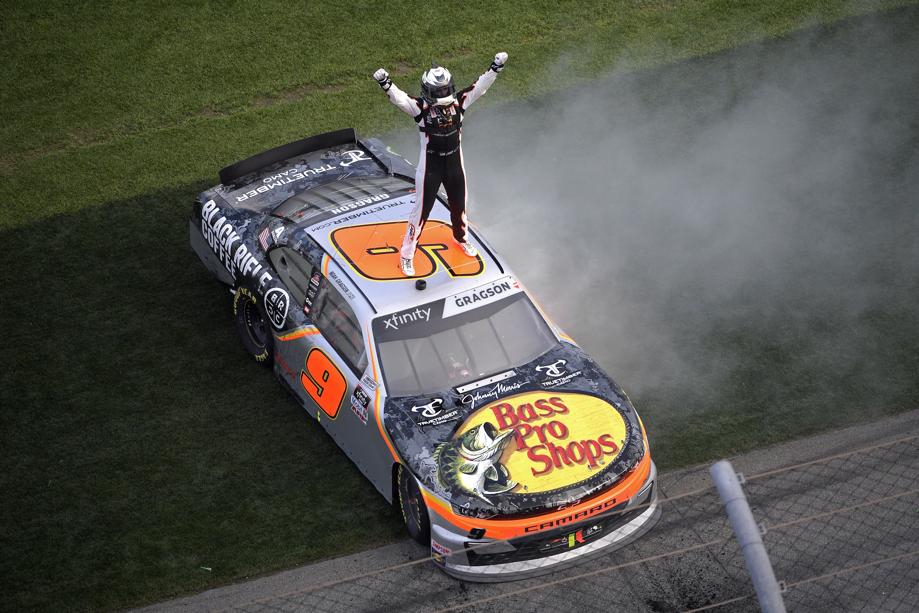 Gragson, driving the No. 9 Bass Pro Shops/BRCC Chevrolet for JR Motorsports and car owner Dale Earnhardt Jr., emerged from a tight battle after the race’s final restart on Lap 118 of the 120-lap/300-mile race being held for the 62nd time at the “World Center of Racing.” Gragson took the lead on Lap 118 and kept it until a Turn 3 multi-car incident brought out the yellow flag on Lap 120 to effectively end the race under caution.

After getting his first NASCAR Xfinity Series victory, the 21-year-old Gragson celebrated like a veteran – and a champion – by climbing the frontstretch fencing and gesturing to the fans in attendance.

“That was bad-ass,” Gragson said. “I’m so thankful for this opportunity and I’m very proud of this team. I spent a lot of time with Dale Jr. this week. I talked to him for about two hours. I wanted to be a better superspeedway racer.

“He told me to go have fun … wreckers or checkers … you’ve got to manage your gaps … be there at the end … and just go lead the damn thing. And that’s what we did.”

Added Earnhardt, winner of 17 races at Daytona International Speedway during his NASCAR career: “We just sat down and talked about all the scenarios you find yourself in, in the draft. I like sharing that information with drivers. This was just a great day for JR Motorsports.

“This (going to Gatorade Victory Lane) never gets old.  You know, I don’t expect I’ll ever do it again as a driver, so I’ll take these whenever they’re coming, right?  If I can get in here as an owner or part of any kind of success like this, it’s a great feeling.”

Also on Saturday, the last of four practice sessions was held for Sunday’s 62nd annual DAYTONA 500 (2:30 p.m. ET; TV – FOX; Radio – MRN, SiriusXM NASCAR Radio). Joey Logano, the 2015 DAYTONA 500 champion, led the practice with a fast lap of 200.517 mph in the No. 22 Shell Pennzoil Ford. Logano was one of six drivers to post laps above 200 mph; there surely would have been more if 14 drivers had not opted to bypass the session.

One of those sitting out was defending and two-time DAYTONA 500 champion Denny Hamlin (No. 11 FedEx Express Toyota). In fact, none of the five Toyota drivers in the field took part. That seemingly play-it-safe approach seemed reasonable. No matter where you qualify, if you switch to a back-up car or change an engine, you must go to the rear of the field at the start of the race. And going from back-to-front is no easy task in this 40-car field.

“Towards the end, I can see it being very aggressive,” Logano predicted. “Everyone is racing so hard. Everyone knows what it means to win the DAYTONA 500, how big of a deal it is. And you know you’re going to see some aggressive driving out there and that usually causes crashes.”

The DAYTONA 500 opens the season for the NASCAR Cup Series; it will be watched by a sellout crowd.