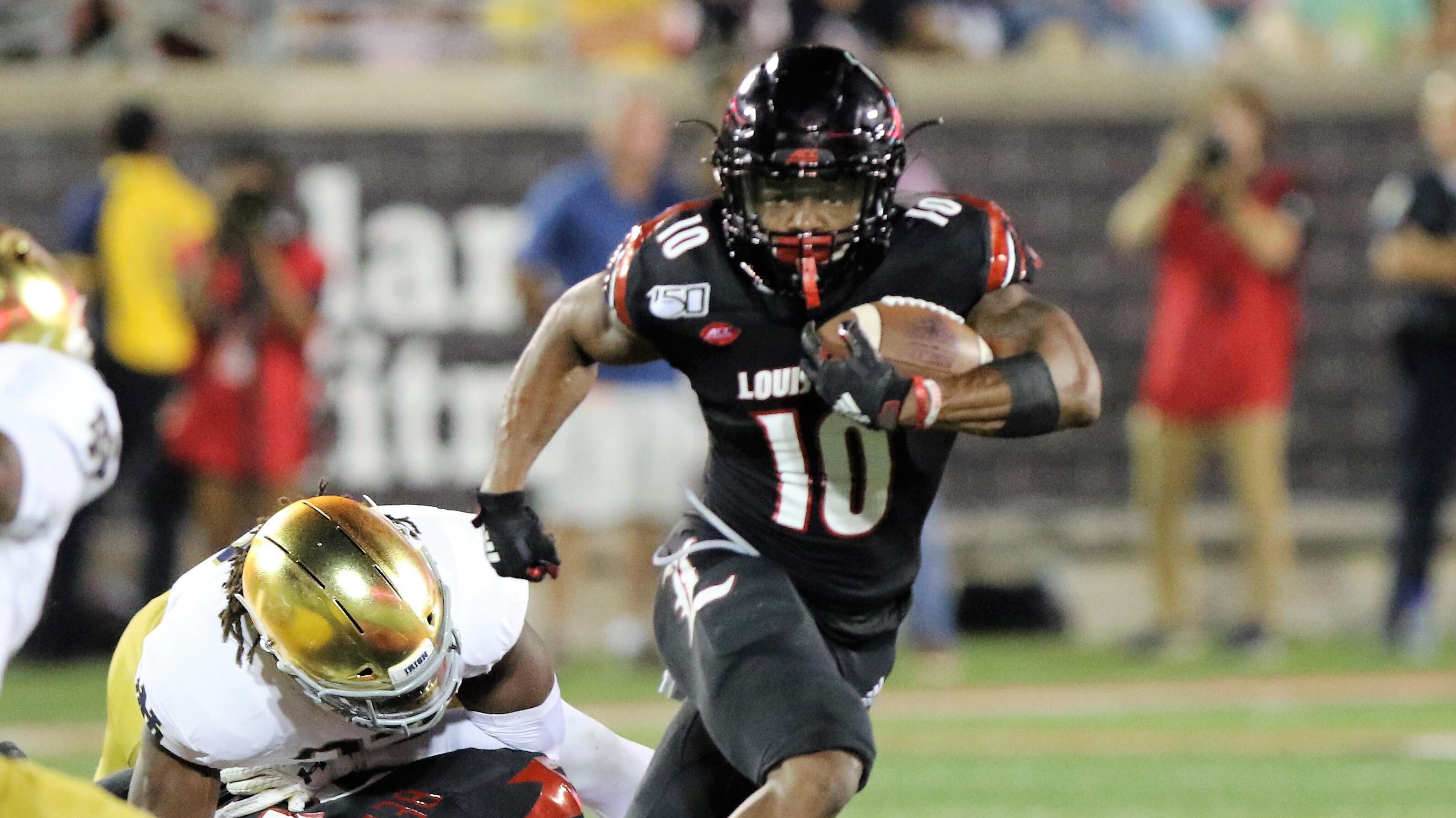 So, here’s the thing. The Bluegrass Sports Nation’s seat in the media’s press room is on the front row of what is commonly referred to as “press row.” How choice was the seat we were assigned by the SID (Sports Information Director) for Louisville’s program? Well, let me put it this way, we were right next to ESPN-Louisville.

Anyway, before tonight’s football game between Notre Dame and the University of Louisville in Louisville, Kentucky (and televised on ESPN no less), we asked ESPN-Louisville to handicap the game for us. He told us he figured the game would be a one-score affair at the half and the Irish figured to pull away in the second half.

When the game went to half 21-14, he was looking pretty smart from where we were sitting (right next to him). Then Louisville came out the second half and Javian Hawkins was running all over the Irish defense in the first drive, after gaining 75 yards in the first half in 8 carries, until the Cards fumbled. “Until the Cards fumbled” would be a reverberative theme throughout the evening.

The two teams traded punts before the Irish pushed the margin to 14 points on an Ian Book to Tommy Tremble pass to make it 28-14 in the third quarter. Shortly after entering the 4th Quarter, Louisville trotted out Blanton Creque who converted a field-goal from 42-yards away to tie for 3rd all-time in Louisville history with 45 made field goals.

The Creque field goal would shrink the margin to 11, 28-17. Notre Dame would score a couple more times and Louisville wouldn’t, pushing the margin up around the spread the odds-makers forecasted prior to kickoff. Well the margin was 18 and the spread was 18.5 so the Cardinals did cover. Funny how accurate those guys in Vegas tend to be. That is probably why they own all the flashy, tall buildings.

So, at the end of the night, my neighbor from ESPN was proved somewhat prophetic. However, there are considerable reasons to be optimistic about what we saw from the Cardinals tonight.

For starters, Louisville didn’t give up 50 points like it had done the last seven games of 2018. Also, a team which struggled running the football last season ran the ball all over the Irish. The Cardinals, on the night, gained 249 yards rushing and 383 yards total.

The difference in the game came down to turnovers. Louisville fumbled the ball on the evening 5 times, losing possession of three of those. One just can’t beat a team like Notre Dame, who was in the National semis a year ago, turning the ball over that many times.

There were noteworthy performances on the evening for Louisville. Javian Hawkins had himself quite an evening and the offensive line appeared to play particularly well. As a matter of fact, new head coach Scott Satterfield said the play of the offensive line “fired him up.”

Hawkins carried the football 19 times, gaining 122 yards rushing and averaged 6.4 yards per rushing attempt. QB Jawon Pass, though not particularly sharp throwing the football (12-27, 134 yards passing), was quite good with his feet. He gained 67 yards rushing on 16 carries, good for 4.2 yards per attempt. More importantly than that, Pass scored two TDs for the Cardinals over the ground.

In his post game press conference, Satterfield noted Pass’ ability to run the football puts a lot of pressure on defenses. It appeared to pressure the Irish defense tonight as they gave up 383 total yards to the Cardinals’ offense. Satterfield also credited his offensive line which he believed had played particularly well. The leading rusher averaging 6.4 yards per rushing attempt, as Hawkins did, certainly supports his position.

Satterfield refused to call the game a “moral victory.” However, he didn’t hesitate to say he was “proud of his guys” as well as promising his charges “would get better.” He was proud of the way his guys fought and he believed there were many positives he could take away from tonight’s performance.

For BSN, this is your Louisville Cardinal’s beat writer, Fletcher Long, reminding the Cardinals to keep PLAYING THROUGH THE WHISTLE!