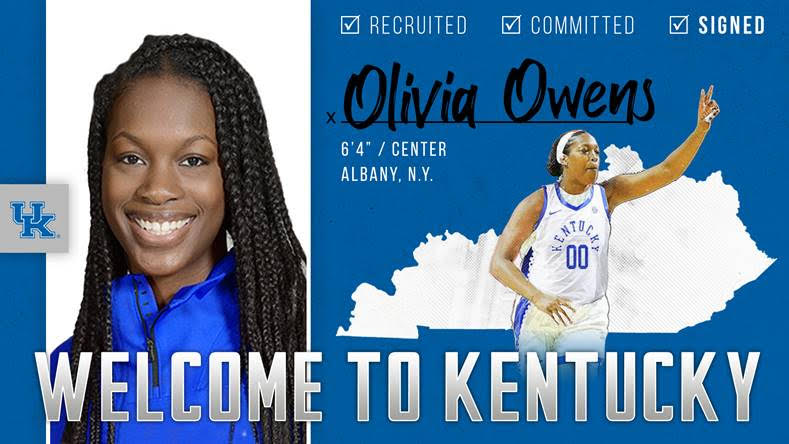 Olivia Owens, who was a five-star prospect and one of the best centers in the nation coming out of high school in 2018, has elected to transfer after two seasons at Maryland and has signed to finish her athletic and academic career with the University of Kentucky women’s basketball program.

“We are so excited that Olivia has chosen to be a Kentucky Wildcat and cannot wait to get her on campus and working with our team and staff,” said UK head coach Matthew Mitchell. “She obviously has a lot of intangibles that you cannot teach, like elite size and strength in the post, which is going to help us tremendously. Our staff enjoyed getting to know her and her family through this process and are eager for that relationship to grow in the future. I really like how our roster has come together and I’m looking forward to getting the team back on campus again soon.”

Owens began her collegiate career as one of the best post prospects in the nation, ranking as a five-star recruit by ESPN.com, which also tabbed her the fifth-best post in the 2018 class and 34th-best player overall. All-Star Girls Report ranked the 6-foot-4 post as the No. 26 overall player in the class after she was tabbed a Women’s Basketball Coaches Association High School All-American Honorable Mention and McDonalds All-American Game nominee. A star at Niskayuna High School, Owens was a USA Today All-New York First-Team honoree and was named the team’s MVP her junior season after averaging 20.6 points and 12.3 rebounds. As a senior, Olivia became only the second player in school history to score 1,000 career points while she also posted 42 points in a game, which set a conference record.

Owens will join two other highly touted transfers that decided to make Kentucky home this offseason in Tennessee transfer Jazmine Massengill and Auburn transfer Robyn Benton. All three players will be on the roster in 2020-21 but will have to sit out the year due to NCAA transfer rules. Massengill and Benton both became Wildcats in April.

Several players will return to the team but did not see time last year due to injury or NCAA transfer rules. Guard Kameron Roach headlines that list after she tore her Achilles at the end of her sophomore season and used last year to rehab and regain strength. Freshman post Deasia Merrill missed last season due to sustaining a season-ending knee injury and should provide UK depth in the post next year while 2019 Pac-12 Freshman of the Year Dre’una Edwards figures to have a big season for the Wildcats in 2020-21 after missing last season due to NCAA transfer rules. Edwards transferred to UK last May after an impressive rookie campaign at Utah.

The Wildcats will also welcome three impressive freshmen to campus in MaxPreps Tennessee Player of the Year Treasure Hunt and all-state honorees Erin Toller and Nyah Leveretter. Hunt, Toller and Leveretter signed National Letters of Intent to play at Kentucky back in November and make up a top-15 recruiting class in the nation according to ESPN.com. Hunt was picked to play in the exclusive Jordan Brand Classic and McDonald’s All-American Game, while Leveretter and Toller were both honored as nominees for the McDonald’s All-American Game.