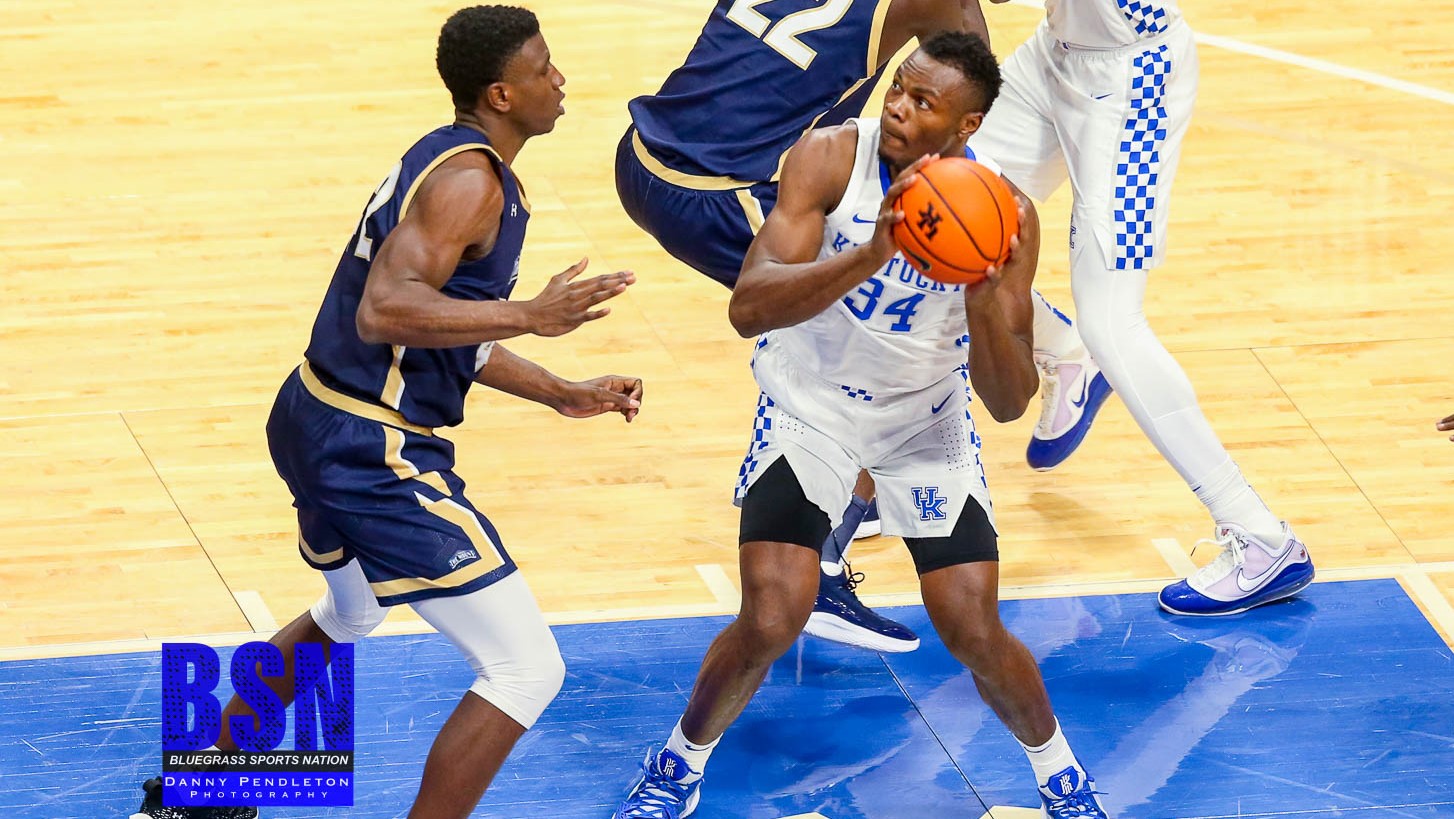 Kentucky continued their non-conference schedule with a matchup against the Mount Saint Mary’s Mountaineers out of the Northeast Conference. While the game remained close during most of the first half, the impressive play of Oscar Tshiebwe was the star of the night and helped Kentucky cruise to a twenty- five- point victory. Tshiebwe was dominant on both ends of the floor and The Rupp Arena patrons saw the talented centers game expand as he was able to knock down several open jump shots. Oscar’s presence continued to impress as he battled for rebounds, blocked shots, and took advantage of the smaller defenders in the post. Tshiebwe nearly had a double double at the half and finished the game with a game high in both points 24 and rebounds 16.

First Half- Oscar Tshiebwe continued his impressive start to the season as the Centers presence was every where in the first half. Tshibwe used his size to score on the smaller defenders and was a force on the boards. At one point in the first Half Tshibwee and Shooting guard Ty Ty Washington Jr combined for the first fourteen points of the game for Kentucky. Tshiebwe with 8 points and Washington Jr 6 points. The Half would stay close throughout as the Mount Saint Mary’s Mountaineers kept the game at a manageable deficit only trailing by five points. The Mountaineers had a balanced scoring attack with seven players scoring in the half, but no one reached double figures. Tshibwe played most of the half playing eighteen minutes out of a possible twenty minutes. Tshibwe finished the half with fourteen points and seven rebounds and two blocked shots. Washington Jr was also impressive in the first half finishing the half with twelve points and two assists. Kentucky made a 5-0 run to finish the half and led Mount Saint Mary’s 38-27.

Second half- Kentucky opened the half with a rim rattling dunk by Tshibwe forcing an early timeout by the Mountaineers. The Rupp Arena patrons were excited and on their feet. Kentucky also opened the half on twelve- three run and at the first media timeout Kentucky led Mount Saint Mary’s 51-30. Kentucky continued to build on the lead with great play from PG Sahvir Wheeler, and Washington. The two-point guards were able to penetrate the defenders and find open shooters. Midways through the half Kentucky grew the lead to thirty-one points. Kentucky 68- Mount Saint Mary’s 37. Tshiebwe continued to score the ball and had reached double double status finishing the game with a game high twenty-four points and sixteen rebounds. Kentucky had a commanding lead that would not be relinquished defeating the Mountaineers 80- 55.

Kentucky improved on the season with an overall record of two wins and one loss. Next up for the Wildcats is another home game hosting the Ohio Bobcats on November 19th, 2021. The game between Kentucky and Ohio is scheduled to tip at 7:00 pm and will be Broadcasted on the SEC Network.