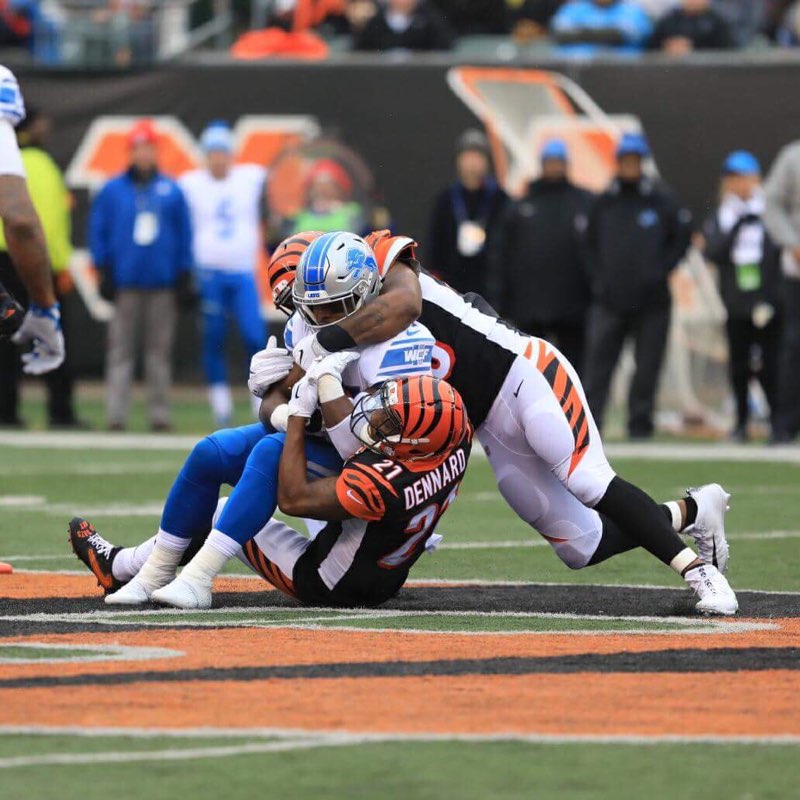 (CINCINNATI, Oh.) – For the 2017 regular season finale in Paul Brown Stadium, Detroit came in like a lion and went out like a lamb. Cincinnati’s surprise 26-17 upset victory was small consolation to a train wreck of a Bengals campaign that started with high hopes but ended with sordid dismay. Not only do the Bengals miss the playoffs for the second consecutive year, they end up with potentially only six wins while alienating most of their fan base with disappointingly lackluster play. The Marvin Lewis era has mercifully run its course in the Queen City, and providentially, I was on hand to witness his likely swan song. That didn’t stop Marvin from being markedly upbeat.

“For the guys, it was a great job today–great fight,” he said. “Throughout the football game, we had the battle of the war of attrition once again. Guys having to step up and play. I think we went into the game with the most linebackers we’ve had in a while and we quickly went without them. So nice job…It was a good day all around for our guys.”

As disappointing as the season was for Cincinnati fans, I learned a lot in my first year on the Bengals beat. Everyone aspires to work at the highest levels of their sport and the National Football League certainly represents the pinnacle of the football profession. The Bengals were bad as a collective team, but the individual players competing every week at Paul Brown Stadium were the best football players in the game today– unique athletes blessed with exceptional talent and unrelenting drive. Being able to observe and interact with them up close and personal was an honor and an experience I won’t soon forget.

Bengals wide receiver A.J. Green was one of my favorites. The seventh-year pro out of the University of Georgia had a relatively down year by his standards, but game after game, win or lose, he always spoke patiently and respectfully with reporters in the locker room. “For me, I want to be great,” he said after a particularly tough loss against the Chicago Bears. “Everything is not going to be easy. It’s why you play the sport. Got to be a man to play the sport mentally and physically. Every week is a fight on your body and a fight on your mind…I’m going to give everything I got every week.”

Those words capture perfectly the enigma that is the National Football League. On one hand, many players like A.J. are playing for pride, respect, and the love of the game. On the other hand, the NFL is really all about business, a big market enterprise geared solely to suck cash out of your already shrinking wallet. With the exception of a few top echelon stars, most of the regular players are treated as interchangeable, disposable parts marched out like gladiators in the coliseum for the benefit of the blood thirsty masses. Sure, they make a ton of money for their efforts, but a part of their humanity has to be missing after participating in all that carnage. It also says a lot about our society—how the violent, brutal, and wanton aspects of the sport appeal ravenously to our licentious desire to be lustfully entertained. Even with all their anthem-kneeling antics, replay stoppages, and injury time-outs this year, NFL ratings remain king of the hill.

It’s not just the physical aspects of the game that wreak havoc on the body—the emotional facets also impart their toll over time. Take Marvin Lewis for example. The guy poured fifteen years of his life—a nice stretch for any profession, but an eternity by NFL standards—into the Bengals organization. He’s now being castigated as the villain responsible for Cincinnati’s demise. That’s simply not merited or fair.  But rather than unceremoniously kicking him out the door, the Bengals’ ownership and fans alike should shower Marvin with a hero’s sendoff for helping to rebuild the franchise and posting a career winning record as the most successful coach in franchise history. Parting ways is never easy, but if there’s ever a time it just feels right for an amicable split, it’s right now.

I asked Marvin what a veteran coach as himself would like to say to a greenhorn like me covering the Bengals in my very first year. “You might be bad luck,” he quipped after an awkward pause. “I don’t know what you expect me to say to that. I know it’s been a year that hasn’t been what many of us expected. But I think the people that hung in there and kept (it) alive and unfortunately that’s what it is in the NFL. It’s a year to year, day to day basis. Our goal with the organization is to be world champions and have an opportunity to do that. We’re not going to get there this year. That’s my job, to get the team to win the Super Bowl. We’re short of that this year. That’s all I can say. There’s nothing in between as a coach. It’s either you do, or you don’t and this year we didn’t.”

The Bengals get a chance to play spoiler again next week in their season finale against the Ravens in Baltimore. It would be fitting for them to send Marvin off with one final win against a divisional rival. If that does happen, I won’t be there to witness it as this will be my final report for the year. I certainly wish the team could have fared better on the field, but in terms of unfettered coverage and high drama, it’s been a heck of a rookie season for me. I hope you’ve enjoyed it as much as I have.