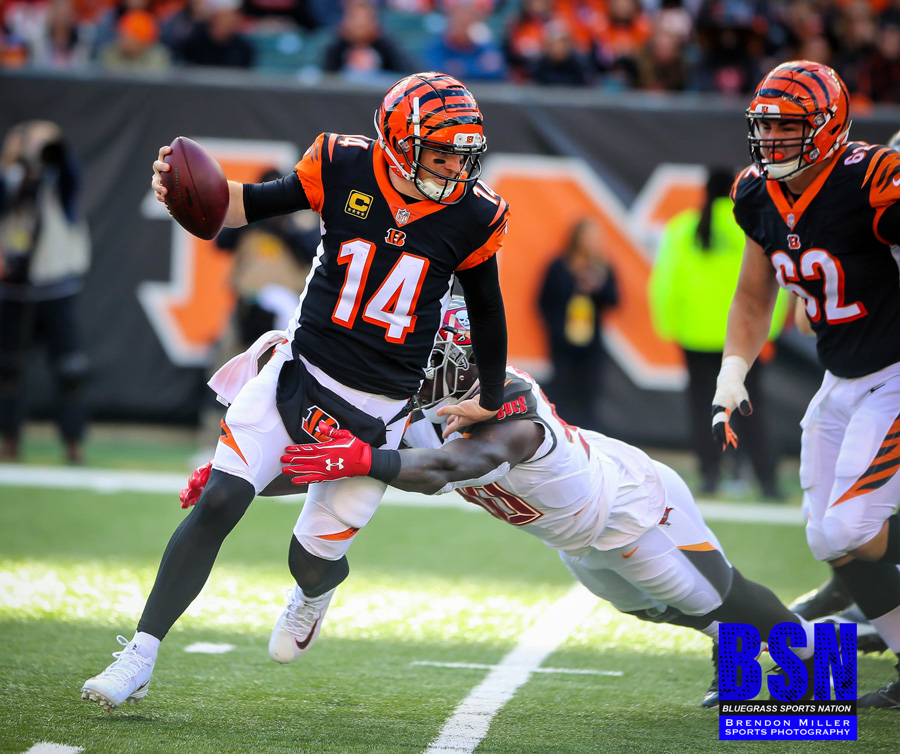 (CINCINNATI, Oh.) – The Bengals’ 37-34 victory over the Tampa Bay Buccaneers served as a bit of a bounce back from their drubbing a week ago in Kansas City. Unlike the prime time embarrassment against the Chiefs, Cincinnati’s offense looked spiritedly viable as they jumped out to a 21-0 lead before a predictable Tampa rally tied the game late. Randy Bullock’s 44-yard game-winning field goal as time expired gave Coach Marvin Lewis a hard-fought win over his old college roommate, Dirk Koetter. The Bengals defense was in a generous mood throughout the afternoon, surrendering a whopping 576 total yards, but also garnering four interceptions and five sacks along the way.

I’m giving credit not only to Bullock’s kick, but also to the one o’clock kickoff. The early-afternoon effort generated just enough fire to keep the embers of hope burning for success this season. The win improves the Bengals’ record to 5-3, a game ahead of the Ravens and percentage points behind the Steelers in the divisional race. Cincinnati has an upcoming bye-week, giving their walking wounded a chance to heal up for the second half sprint.

“Obviously we wish we had played better in the second half and made the game a little bit easier than having to drive down and kick a field goal with no time left,” quarterback Andy Dalton said in his postgame presser. “We had too many three and out drives, so from that standpoint, it’s disappointing. But we won. To be 5-3 now is huge.”

Dalton, consistent with his performance during non-prime time contests, was a respectable 21-34 for 280 yards and 2 touchdowns. Tyler Boyd continued his outstanding season with a 9-catch, 138-yard, 1 touchdown performance. Joe Mixon had 2 touchdowns of his own while accumulating 123 yards on 21 carries.

So why the uptick from last week? You know if this game had been played in prime time, the Bengals would have blown it at the end. Put this game under the bright lights, and they would have surely self-destructed while the rest of the nation looked mockingly on. The past indignity has been well documented. Cincinnati has lost thirteen out of sixteen on Sunday nights alone, including nine straight. They’re 6-15 in prime-time night games since 2011, when coincidentally, Dalton came into the league. Marvin Lewis, coincidentally, is 0-7 in his playoff tenure. It’s gotten to the point where big-game embarrassment and heartbreak is expected by fans who deserve better.

The reality is that the Bengals aren’t cursed or snakebit. The cold hard truth is that they’ve just never been that good. They’ve always been a franchise steeped in mediocrity. Prime time games are usually played against quality opponents that are consistently better than what management puts out on the field. As much as fans like to imply, it’s not solely a matter of Marvin or Andy choking away the big ones. They’re both OK—mediocre at best. There’s a big game, prime time pecking order, and unfortunately, the Bengals are middle of the pack. Count on them throwing up a clunker playing Kansas City under Andy Reid in prime time at Arrowhead, but—as everyone witnessed today—they’re still fully capable of occasionally squeaking out a victory versus Tampa Bay under Dirk Koetter in the afternoon at Paul Brown Stadium.

Speaking of Dirk Koetter, I asked Marvin how he manages his emotions when coaching against friends. “I play against somebody every week,” he answered dismissively. “Dirk and I are obviously closer, but we play against somebody every week. I play against Sean (Payton) in a week. I played against Andy (Reid) last week. These guys have been friends for a long, long time. That’s just part of coaching and being in this as long as I have. Every time we go out there, we know the guy. But we’re in a business to win, just like they are. That’s part of it.”

The rest of the schedule bodes well for Marvin. Fortunately, there are no more prime time meetings scheduled between him and his friends.

Dr. John Huang covers the Cincinnati Bengals for Bluegrass Sports Nation and Sports View America. He’s currently working with former LEX18 sportscaster Alan Cutler on his new book. If you enjoy his writing, you can read more at www.huangswhinings.com or follow him on Twitter @KYHuangs.