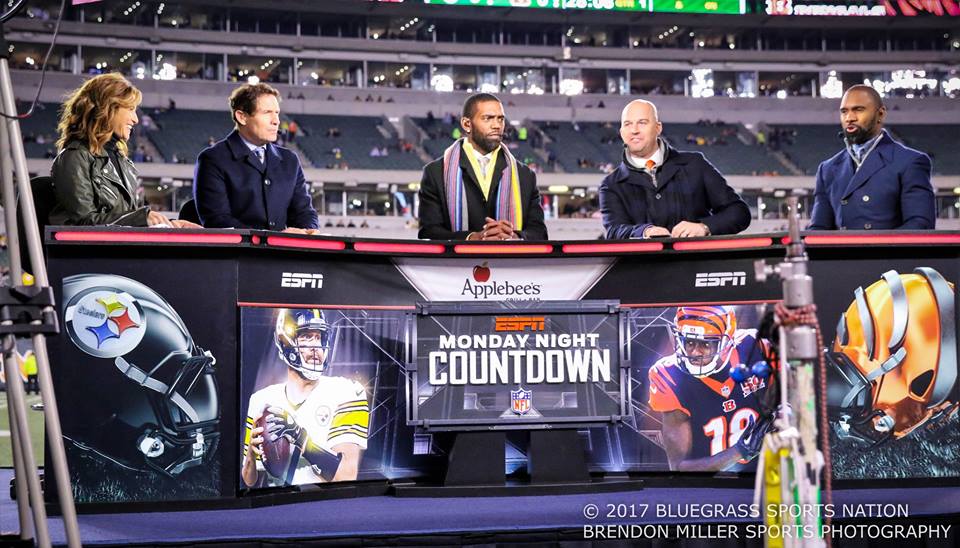 (CINCINNATI, Oh.) — To the true sports enthusiast, there’s really nothing like the spectacle known as Monday Night Football. With the outcome of the weekend slate of games banished to the rearview mirror, the eyes of the entire sporting world become focused ahead on the two remaining teams left playing on center stage. With no other distractions in sight at the beginning of this work week, anyone with even the slightest interest in the National Football League is keenly tuned in on Monday night. For the participating players and coaches, that means every move is scrutinized, every highlight is magnified, and every blunder is dissected ad infinitum by friend and foe alike.

Of course, the two teams playing this week just happen to be the Pittsburgh Steelers and our own Cincinnati Bengals. The fact that the divisional rival Steelers stand in the way of the Bengals’ last gasp run toward a wildcard playoff slot only adds to the existing theater of the moment. It’s lights, camera, and hopefully a whole lot of action as I’m pumped, primped, and primed to bring you all the pageantry.

The premiere of Monday Night Football remains one of the most seminal moments in contemporary sports. During the 1970’s, Frank Gifford, Dandy Don Meredith, and Howard Cosell brought a unique sense of entertainment from the broadcast booth directly into our living rooms. The football games, while somewhat compelling, were suddenly overshadowed by the personalities and iconic events that subsequently transpired over the airwaves.

Over the next 47 years, we watched together spectacular performances from superstars such as Marino, Elway, Montana, Manning, Rice, Campbell, Jackson, and Dorsett. Along the way, we also got to experience Joe Theisman’s gruesome leg injury, Bret Favre’s inspiring performance after his dad’s death, and Terrell Owens’ sharpie celebration all from behind the lens of the Monday Night cameras. As a determined nation, we observed on a Monday night, a return to normalcy just two weeks after 9/11, and—as a humbled and repentant nation–a return to the Superdome after the devastation of hurricane Katrina, also on a Monday night. Many of us probably learned of John Lennon’s death while watching the Patriots versus Dolphins game on that fateful Monday night back in December of 1980.

As Hank Williams Jr. appropriately sang, “All my rowdy friends are here on Monday night.” Tonight in Cincinnati, that includes Big Ben, Le’Veon Bell, Antonio Brown, and the rest of the big, bad Steelers. It also includes Sean McDonough, John Gruden, and the rest of the MNF broadcasting crew. The Ben-Gals are here, together with Boomer Esiason, Steeler Nation, and all those terrible, terrible towels.

And of course, the Bengals are here. Going off script, the playoff wannabees played their best half of football in quite some time. They appeared less than star struck from the get go, slicing and dicing themselves surprisingly to a 17-3 halftime lead. For once, it was the Steelers who bumbled and fumbled, as if stricken by stage fright.

On cue, Pittsburgh made a game of it in the second half, their offense coming to life just as the rains came, the streams rose, and the winds started to blow through Paul Brown Stadium. A 6-yard touchdown pass from Ben Roethlisberger to Antonio Brown pulled the Steelers even at 20 apiece and had the 56,029 poncho-clad patrons fearing the worst. Chris Boswell’s 43-yard FG as the clock expired put a fitting end to the game as well as the Bengals’ playoff chances. Final Score: Pittsburgh 23, Cincinnati 20.

With the loss, the Bengals’ losing streak to the Steelers now extends to 6 games—11 straight if you take into account just prime time contests. Long-time Bengal fans have to be hurting as this series has morphed into something quite hideous. Considering the Monday Night stage, the stakes involved, the bone-headed penalties, the blown lead, the devastating injuries, the dirty hits, and the last-second heartbreak, this defeat may rank as one of the worst in recent memory. It took Jeff Drummond, a colleague, friend, and Steeler fan to perhaps sum it up best of all. “This ugly ‘rivalry’ has just robbed me of the joy I used to have watching this game with my dad—disturbing,” he said.

Driving back to Lexington in the wee hours of what was now Tuesday morning, I was able to reflect soulfully on this most recent Monday Night journey. To be able to experience all the captivating sights and sounds that had me mesmerized as a youth is beyond the proverbial dream come true. For a die-hard football fan, NFL Monday Night Football remains unquestionably a bucket list destination. Although I didn’t necessarily enjoy what transpired on the field tonight, I’ll still always cherish the overall experience. I hope all my rowdy friends will too.

John Huang is a local sports columnist. He covers Cincinnati Bengals Football for Bluegrass Sports Nation. If you enjoy his writing, you can read more at www.huangswhinings.com or follow him on Twitter @KYHuangs.