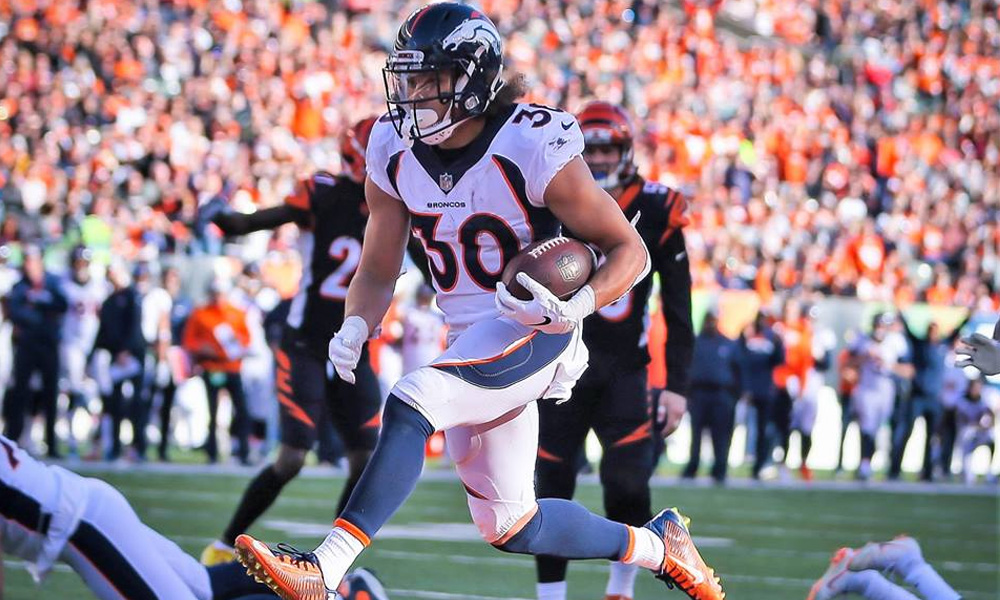 (CINCINNATI, Oh.) – The last time A.J. Green was on the football field, the Bengals were 5-3 and still riding the coattails of a promising start to the season. Since that time, they’ve dropped four in a row, lost their starting quarterback to a thumb injury, and are barely staving off mathematical playoff elimination.

Against the Denver Broncos, the 7-time Pro Bowl Wide Receiver was back on the field—for just over a quarter. He had one catch for 7 yards…and then the unthinkable happened. A.J. Green left the game with a right foot injury. He was carted off the field, holding his head in his hands, as his helpless teammates, stumbled, bumbled, and fumbled their way to a 24-10 soul-sapping defeat. Cincinnati is now 5-7, with playoff hopes on life support after having lost six out of their last seven games.

Jeff Driskel, replacing the injured Andy Dalton and making his first NFL start at quarterback, finished 25 of 38 for 236 yards with a touchdown and a pick and was sacked 4 times. Joe Mixon rushed 12 times for 82 yards, while Tyler Boyd led the team in receiving with 6 receptions for 97 yards. The Bengals beleaguered defense made an all-star out of Broncos undrafted rookie Phillip Lindsay who ran wild for 157 yards and 2 touchdowns on the afternoon. Having 100 yards in penalties and three turnovers certainly didn’t help the Bengals’ cause, but when Green went down early in the second quarter, what little air the team still had was symbolically sucked out of the stadium.

I like A.J. Green. In the two years I’ve been covering Bengals Football, he’s always been professional, courteous, and fair in his dealings with me. Win or lose, it seems he’s always sitting for interviews and patiently answering questions. I’ve never seen him raise his voice or become irked by inane queries. In fact, he speaks so softly that you frequently must strain to hear him over the usual locker room chatter. His work ethic is relentless.

As the consummate teammate, Green spent the last four weeks encouraging his cohorts to stay like minded and focused. “I just tried to talk to some of the younger guys and the older guys just stay together, stop pointing fingers. Everybody can go down once you have a losing season and a lot of people start to point fingers,” he said. “For me, we all have to stick together. We are all in this together. We are all losing together. Nobody is winning. End of the day we just must go back to the drawing board and look ourselves in the mirror and go out there and practice hard. Try to do your job, that’s the biggest thing and everything else will take care of itself.”

Those are powerful words, especially coming from the lips of your best player. The fact that they’re so soft spoken belies their impact. Literally, everything about A.J. Green is impactful. After being chosen as a USA Today High School All-American receiver at Summerville High School in Summerville, South Carolina, Green continued his star-studded football career at the University of Georgia, where he attained college All-American honors before being selected as the fourth pick in the first round of the 2011 NFL draft by the Bengals. Now in his 8th professional season, he’s had just over 600 receptions, is nearing 9000 receiving yards, and stands at the pinnacle of his profession.

AND NOW THIS HAPPENS. I know that injuries are part of the game, but A.J. Green deserves better. He’s spent his whole career laboring for a team mired in mediocrity and steeped in poor management decisions. Honors are nice, but you have to wonder what would happen if he played on a real contender. After losing in the first round of the playoffs during each of his first five seasons, the Bengals are now in danger of missing the playoffs altogether for the third year in a row. Despite a beautiful December afternoon with record-setting high temperatures, Paul Brown Stadium was only half filled. The “average Joe” fan is way past incredulous. Even the most hearty, supportive, and optimistic fans are voicing their doubts.

What happened to A.J. Green today was indicative of the Bengals’ season to date. The major difference is that his toe injury wasn’t self-inflicted. “We shot ourselves in the foot it seemed like with the penalties we had today,” Coach Marvin Lewis said in his postgame presser. “We took back offensive plays, offensive possessions, throughout the day. That really set us back on offense when we’ve had good positive plays…obviously we can’t drop a punt, and then we allow a 60-yd touchdown run. It boiled down quickly to about 3 plays in the football game.”

The Bengals’ woes lie much deeper than just failing to execute on 3 plays. I’m not sure what the quick fix is, but everyone’s tired of the constant inefficiency and ineptitude. Injuries to team-leading studs like A.J. Green only add fuel to the growing Queen City dumpster fire. For the Bengals’ sake, let’s all hope for a quick and complete recovery. After hitting rock bottom, it’s time to start putting the pieces back together again.

Dr. John Huang covers the Cincinnati Bengals for Bluegrass Sports Nation and Sports View America. If you enjoy his writing, you can read more at www.huangswhinings.com or follow him on Twitter @KYHuangs.