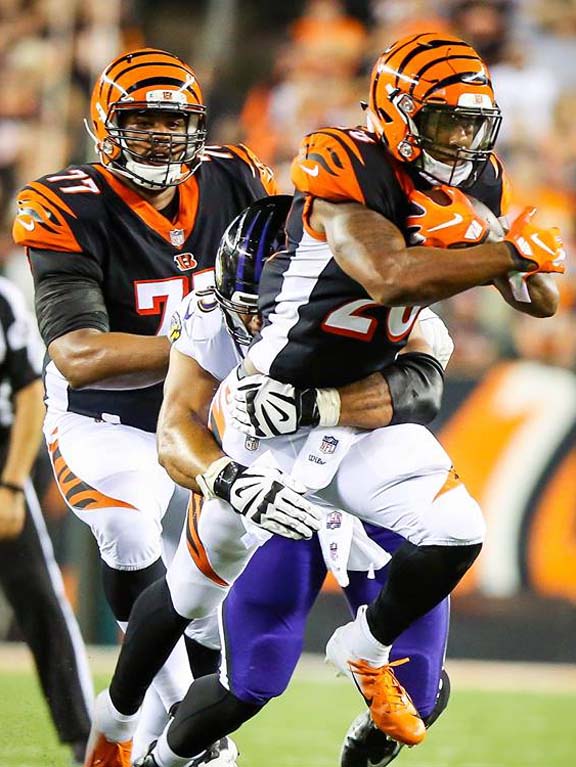 (CINCINNATI, Oh.) – Cincinnati’s 2018 home opener against the Baltimore Ravens went much better than planned. Not only did the Bengals defeat their AFC North divisional rivals to go 2-0, but they did it in impressive fashion in front of a Thursday night national television audience on a special occasion honoring their 1988 Super Bowl team. The 34-23 victory before the 50,018 fans in attendance sparked memories of yesteryear and rekindled hopes for the remaining season to come.

The 1988 Super Bowl team—coached by Sam Wyche and led by quarterback Boomer Esiason—was the last one to make even a ripple in the postseason during the past three decades. Since that time, the Bengals have gone through a lot—not much of it good. They haven’t won a playoff game since the 1990 season, the sixth-longest streak of postseason futility in the history of the NFL. Marvin Lewis is 0-7 in the postseason in his fifteen years as head coach.

It was the best of times—1988 that is. “Do I think about that? All the time,” said owner Mike Brown. “That’s what’s in my mind. I know the feeling you’re talking about, and I want us to somehow come back and grab onto that again. It’s the best of times, and some of that is what keeps me plugging along here.”

For a franchise steeped in mediocrity, the Bengals appear to be making noticeable efforts to capture past glory. Everyone agrees their offensive line was horrendous last year, as the team finished last in the league in yards gained. By drafting center Billy Price from Ohio State with their first-round pick, acquiring left tackle Cordy Glenn in a trade from Buffalo, and signing right tackle Bobby Hart, the Bengals front office shows that they’re serious about moving back toward the preeminent days of Anthony Munoz and Max Montoya.

Against the Ravens this evening, the 2018 Bengals offensive line provided outstanding, sack-free protection for quarterback Andy Dalton. The second-round draft pick from TCU, entering his eighth year as a pro, was on fire, completing 24-42 passes for 265 yards and four touchdowns. His three quick touchdown tosses to A.J. Green by the thirteen-minute mark of the second quarter brought back memories of Boomer Esiason connecting with Eddie Brown. Remember that Esiason passed for 3,572 yards and 28 touchdowns in 1988—numbers that Dalton could easily surpass with games such as this.

The offensive line also blocked well for running back Joe Mixon. The second rounder from Oklahoma had 21 carries for 84 yards in what he hopes will be a breakout second season. Can Mixon surpass 1988 running backs James Brooks and Ickey Woods, who together accounted for over 2000 yards and 29 touchdowns rushing and receiving during that magical season? He and backfield cohort Giovani Bernard have a ways to go this year before matching those lofty numbers.

On the defensive side of the ball, it’s out with the old and in with the new—well sort of. Cornerback Adam “Pac-man” Jones and linebacker Kevin Minter are gone, replaced by linebacker Preston Brown, safety Jessie Bates, and defensive end Sam Hubbard. Still anchoring this defensive unit, however, are stalwart defensive end Carlos Dunlap and defensive tackle Geno Atkins, both of whom signed multi-year contract extensions right before the start of the season. The duo should provide a solid foundation for Teryl Austin’s defensive unit looking to make its mark in the year ahead.

For the game, the defense did just enough to win. Safety Jessie Bates intercepted Joe Flacco on the Ravens’ second series, setting the stage for the Bengals’ first touchdown and an eventual 21-0 lead. Behind Flacco’s arm (32/55, 376 yards, 2 TDs), Baltimore battled back, cutting the deficit to 28-23 with 9:35 left in the game. Leading by eight with less than three minutes to go, a Shawn Williams forced fumble on a scrambling Joe Flacco effectively ended Baltimore’s chances. Although forcing two interceptions, Cincinnati gave up 425 total yards on the evening. Perhaps All-Pro nose tackle Tim Krumrie from the 1988 team could shed thirty years to return and help out.

Whether or not the 2018 Bengals can channel the greats of thirty years past remains to be seen. “We knew they (the 1988 Super Bowl team) were going to be coming back,” Dalton said after the game. “Obviously to play in Super Bowls is something that you dream about doing. It’s what you work so hard for. Yeah, that’s the goal, is to win the Super Bowl and come back and be honored for it.”

Undefeated out of the gate, the Bengals already find themselves atop their division. They’ll hope to continue their winning streak with upcoming road games at Carolina and Atlanta in the next couple of weeks before returning home to face the Miami Dolphins on October 7.

For long-suffering Bengals fans, a win over the Ravens is always sweet, but the Super Bowl still seems decades away.