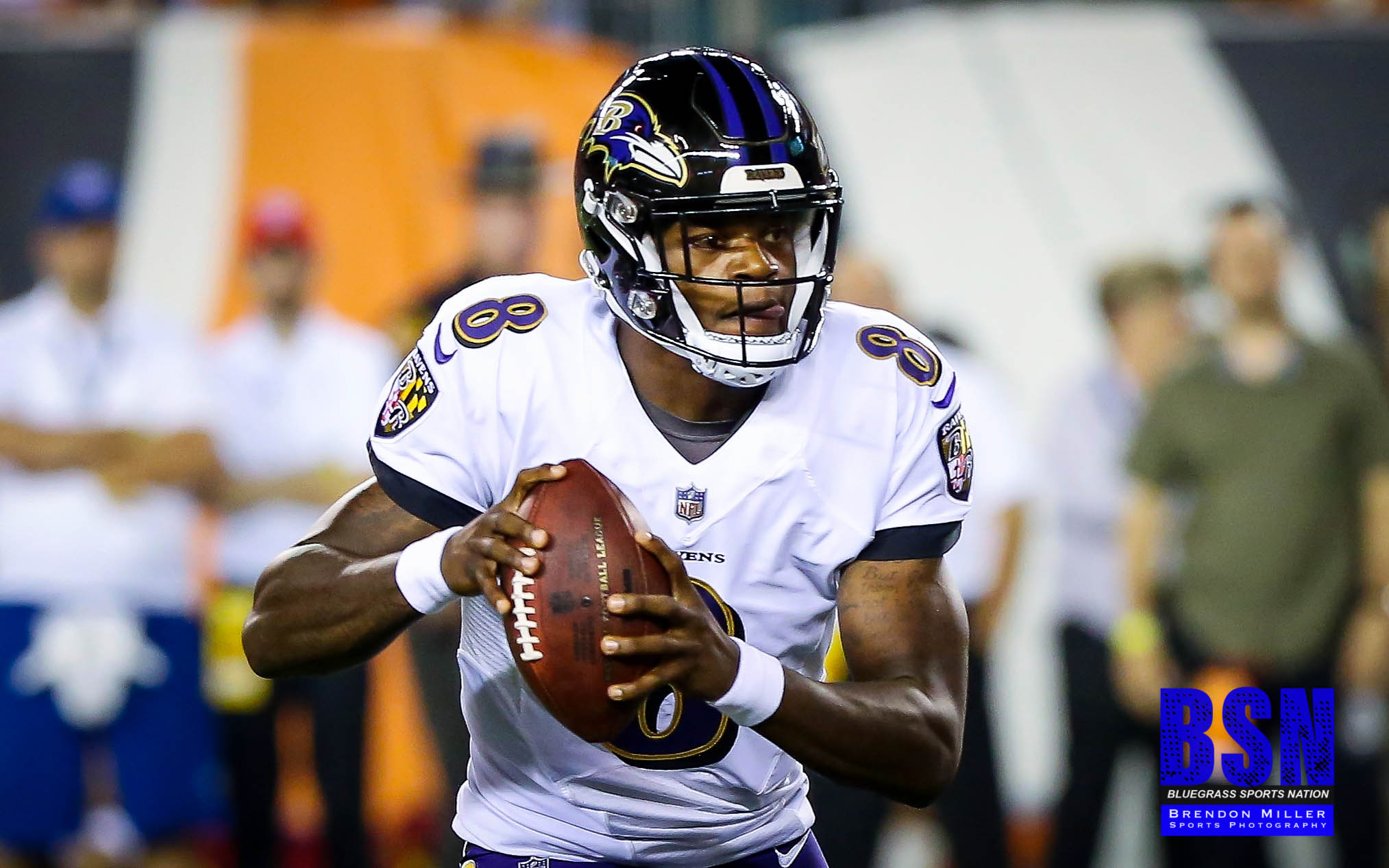 Joe Burrow went from setting an NFL record last week to becoming the second Bengals rookie quarterback in as many games with their division rival to be taken to the AFC North woodshed by the relentless Ravens defense.

The Bengals couldn’t get on the board until 32 seconds left in Sunday’s 27-3 loss at Baltimore and when the dust-cleared their red-hot quarterback had been cooled off with seven sacks, 15 hits, two turnovers, 183 yards on 19 of 30 passing and countless of blitz looks while missing on 13 of 16 third downs.

Last week he was the next big thing. This week he was another victim of the Raven’s defense that is now at 6-19 against rookie signal callers during the 13 seasons of head coach John Harbaugh. Welcome to the old school AFC North kid, where the only team that blitzes more than Baltimore also resides and is 4-0 and hosts you next month in Pittsburgh.

Sure, they’ve already played Cleveland, but this is old school AFC North.

How tough is the AFC North? After five weeks the 1-3-1 Bengals are the only team without four wins.

And Burrow gets it.

When Burrow Zoomed with the media after it was over, one could almost hear the index cards fluttering in his head as jotted down the notes from his longest learning day on the job courtesy of Ravens defensive coordinator Wink Martindale.

“He had a good plan. We just didn’t execute our plan very well. I didn’t play very well,” Burrow said. “Personally, I can get the ball out of my hands faster. I wasn’t very accurate today, which was disappointing to me.javascript:falseJoe Burrow: “We’re going to keep working hard. We got great people within the organization”

“They were bringing a lot of different blitz looks. They brought some ‘Cover Zero’ that I personally didn’t handle well,” Burrow said. “It wasn’t tough mentally. Obviously, I was frustrated. We weren’t playing very well, but we know how to handle pressure from a defense, and we’ve handled it the last three or four weeks. We just didn’t handle it very well today.”

Earlier in the week Burrow had said he was excited for this one because he wanted to see where the Bengals stack up against a good team. He couldn’t have liked the answer. But head coach Zac Taylor said Burrow didn’t regress.

“No. No … That’s a tough, aggressive defense, and I have seen them do that a lot to a lot of quarterbacks in this league,” Taylor said. “There are certainly things that you can learn from. I expect that he will learn from that. But again, it is just one of those performances early in the season that you are going to have. You are going to have to learn from it, and I am very confident that he will do that.”

Taylor didn’t hide from the pointed finger, either, after Martindale lifted his record to 4-1 against the Bengals. Burrow had to deal with an alarming number of free runners, ranging from Pro Bowl end Calais Campbell unblocked and chasing him out of the pocket to end the first series to free safety DeShon Elliott flying in untouched for the last sack.

Seven different Ravens had sacks and five of them were defensive backs, tying an NFL record last hit 15 years ago.

“There were times where we had tight ends in protection, backs in protection, we have to make sure we are all dialed in,” Taylor said. “There are some times where there is going to be a free hitter that we have to be aware of as well. Again, it takes all of us, it takes me as the play caller for certain to make sure that we are put in better positions where we can manage that, take the pressure off. I am certainly accountable for that, there is no doubt about it.”javascript:falseZac Taylor: “This is a resilient team, a connected team”

The Ravens were able to line up everybody and anybody everywhere and anywhere because the defense gave up 17 points in the first 15:04. They were terrific the rest of the way, but the offense just couldn’t figure out the blitz. Burrow didn’t think it was a confusion issue but he’d like to get the ball out of his hand quicker.

His wide receivers appeared to struggle to get separation, but it was tough to tell if they had the time because Burrow certainly didn’t.

“We just have to find a way to get open. We have to find ways to speed up the routes,” said wide receiver Tyler Boyd, who caught four of his six targets for 42 yards. “We need to find way to just out-execute those guys. It was tough. We were backed up on a few of the third downs, but we just have to find a way to out-execute them, and figure out different schemes to when they want to send crazy stunts at us we should be able to pick it up and just deliver the ball so we can catch and run to at least pick up the first down.”

No question the receivers were frustrated. Rookie wide receiver Tee Higgins caught four of his eight targets for a team-high 62 yards. He had the longest play of the day, a wide-open 26-yarder off play-action in the second series, back when play-action mattered.

And a glum A.J. Green watched from the bench after leaving with a hamstring problem in the first half. The only target he had was Burrow’s desperate-back-foot-third-down-blitz-in-the-face throw that went sailing over him into the arms of cornerback Marcus Peters. Taylor said there was no shot for Green to get it.

“I think we were all frustrated at a point. It was kind of hard to pick out individual guys. We were all upset,” Boyd said. “Not about our targets or things like that. We all want to win. That’s what it all comes down to. We felt that we left a lot out there, and that was the worst performance of the offense that you ever display. I can tell you that will never happen again.”javascript:falseBurrow floats 19-yard pass to Joe Mixon for successful 4th down conversation

Burrow and Boyd were calling it a hard-core lesson. Boyd said they needed a reminder what it takes. Taylor insisted they know the issues and noticed during the long, tough day, “There was no pointing fingers, there was no one trying to put blame on other people.”

“I feel like we needed this. Because they’ve got one of the best defenses in the league,” Boyd said. “I felt us going against them so early should let us know how much harder we should go, how much we should prepare and never settle for less, never taken anything for granted. Just continue to go out there and try to beat anybody. It’s a learning lesson for us on offense. Now we know what to expect with anybody we face in the near future of what they can throw at us. I think we should be good.”

It seems that Burrow is keeping them together off the field, too. As some Ravens acknowledged after the game, they teed off.

“He stood in there and took a lot of great shots. Shoutout to him for bouncing back,” said linebacker Pernell McPhee. “Salute to him. I just can’t wait to see him the next time we play him. I think he carried out the game plan. He did a great job though, man. And shoutout to him. He’s a tough guy.”

Burrow could see himself looking back on this in a few years. Who knows? Maybe while puffing a cigar.