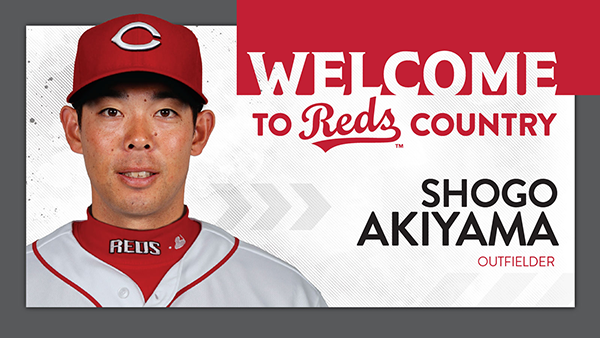 “We scouted Shogo for several years in anticipation of his free agency,” Williams said. “We like his approach at the plate as well as his outfield defense, and we think he will complement our team very well.”

Akiyama, 31, would be the first player born in Japan to appear in a game for the Reds. He will be introduced at a press conference at 10 a.m. Wednesday in The Handlebar at Great American Ball Park. Fans can watch the press conference live on reds.com or on the team’s official Twitter, Facebook and YouTube pages.

Akiyama hit .301 with an on-base percentage of .376 during a 9-year career in Nippon Professional Baseball, all with the Seibu Lions of Japan’s Pacific League. The center fielder was a 5-time Pacific League All-Star, 4 times received a Best Nine Award as 1 of the league’s 3 best offensive outfielders and 6 times won a Golden Glove Award as 1 of the PL’s 3 best defensive outfielders.