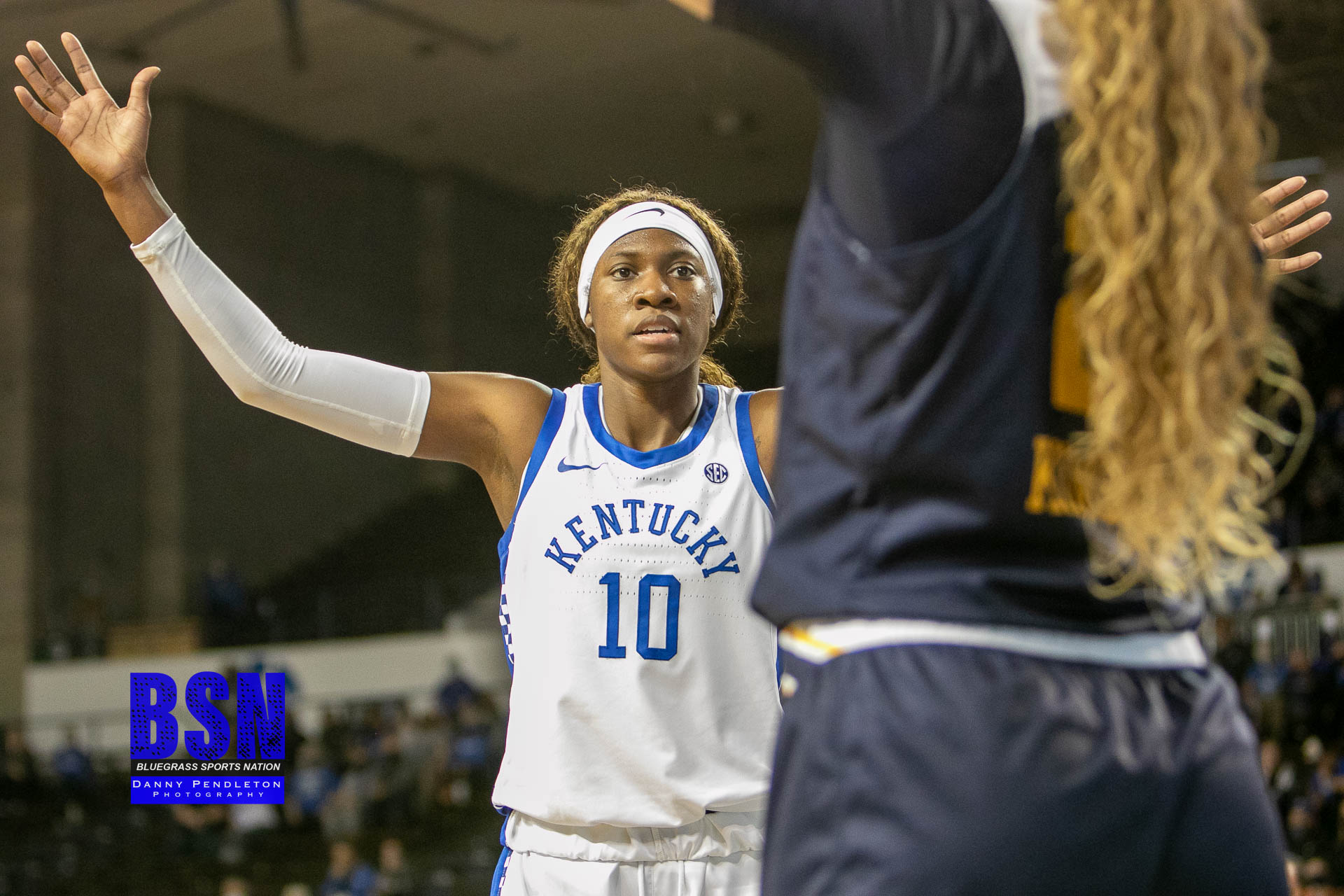 Wildcats will return to action Thursday vs. DePaul at 7 p.m. ET inside Rupp Arena

Howard added seven assists and six rebounds in the game for the Cats. Dre’una Edwards had 17 points and 11 rebounds for UK, while Jazmine Massengill had 13 points and eight assists. Robyn Benton was the third Wildcat in double figures, scoring 12 points.

The Cats forced 27 Merrimack turnovers and turned those into a whopping 38 points. UK held a 52-20 advantage on points in the paint and a 23-9 edge in fast break points.

The teams were tied 5-5 early in the game before Kentucky turned up the defensive pressure and forced four Merrimack turnovers in less than three minutes. Those miscues led to 13 straight Kentucky points that gave the Cats an 18-5 lead with 5:04 left in the first quarter.

Altogether, UK would go on a 14-0 run to lead 19-5 before Merrimack’s Carla Balague ended the run with a three from the top of the key. In fact, the Warriors would outscore the Cats 7-2 over the remained of the period to cut UK’s lead to 21-12 after one period of play.

Early in the second quarter, Kentucky extended the lead on a three by Robyn Benton and a layup and free throw by Howard, giving UK a 27-12 lead. But Merrimack would answer with a 10-2 run, cutting the UK lead to 29-22 with 7:15 left in the half.

However, the Cats would re-assume control of the game after that. Kentucky proceeded to outscore Merrimack 17-9 the rest of the half. Howard had seven points in the stretch that allowed UK to take a 46-31 lead into the break. Howard had 14 points, five rebounds and four assists in the first half.

As they did in the second quarter, Kentucky started the third quarter very quickly. The Cat got a layup from Edwards, and a layup and free throw from Benton to take a 51-31 advantage. But the Warriors would answer with seven straight points to cut it back to 51-38 with 6:14 left in the third quarter.

The back-and-forth would continue as Kentucky scored six in a row to lead 57-38 before Merrimack scored five straight to cut it back to 57-43 with 3:33 left in the third period. But the Cats made the final run of the period, scoring the final eight points to lead 65-43 after three quarters.

Kentucky pulled away even further early in the fourth period. It was an 11-2 run that allowed the Cats to lead 76-45 with 7:28 to play. The Cats would lead by as many as 37 before setting for the 34-point victory.

Kentucky returns to action on Thursday night, hosting DePaul at Rupp Arena. Tipoff is set for 7 p.m. ET and the game can be seen on the SEC Network.