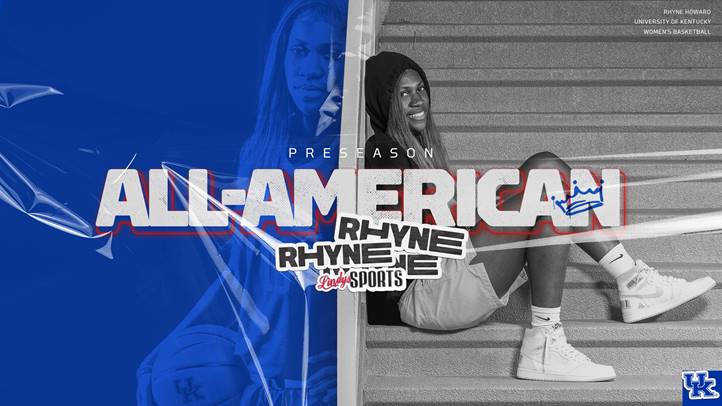 University of Kentucky junior guard Rhyne Howard had one of the best seasons in program history last year and the star is already earning preseason praise as the 2020-21 season draws, earning preseason first-team All-America honors by Lindy’s Sports, the publication announced recently.

On top of Howard’s All-America honor, Lindy’s Sports selected its preseason top 25 listing the Wildcats at No. 11. It was an impressive 2019-20 season that concluded with UK ranked No. 16 in the Associated Press Top 25 and No. 18 in the USA Today/Coaches Top 25. The Wildcats were ranked inside the top 20 of both rankings all season long, peaking at No. 11 in both polls in mid-January.

Howard, of course, is the leading returner for the Wildcats after a long list of accomplishments and honors last season. The guard was one of five finalists for the John R. Wooden Award, which is widely considered the most prestigious honor in college basketball and names the nation’s best player. She also became the third player in program history to earn first-team All-America honors from the United States Basketball Writers Association, which automatically made her one of five candidates for the Ann Meyers Drysdale National Player of the Year award from the USBWA.

Howard, who was the 2020 SEC Player of the Year and earned first-team All-SEC and SEC All-Defensive Team honors, was one of four finalists for the Citizen Naismith Trophy, recognizing the most outstanding women’s college basketball player of the year and a top-five finalist for the Cheryl Miller Award, which names the top small forward of the year in collegiate women’s basketball.

The native of Cleveland, Tennessee, had a sensational sophomore season for Kentucky, leading the Wildcats and ranking second nationally with 23.4 points per game. The guard also led UK with 6.5 rebounds per game and 62 steals, while she was second on the team with 29 blocks and third on the team with 68 assists. Howard hit 84 3-pointers this season, which was the most in program history in a single season, topping the previous record of 81 set by Sara Potts in 2004-05. Her 3.1 3-pointers per game ranked top-10 nationally while her 633 total points ranked fifth nationally. Howard’s 23.4 scoring average was the most for a UK player under Matthew Mitchell and the fourth-best average in program history.

Two of the top-12 scoring performances in program history came last season by Howard. The first was her 37 points in UK’s win vs. Tennessee followed by a school-record tying 43 points at Alabama. She is the only player in program history to score 37+ points in consecutive games and the first to hit seven or more 3-pointers in consecutive games. On top of earning six double-doubles last season, Howard became the second fastest UK player ever to reach 1,000 career points and ended the season with 1,158 career points which ranks 27th on UK’s all-time scoring list.