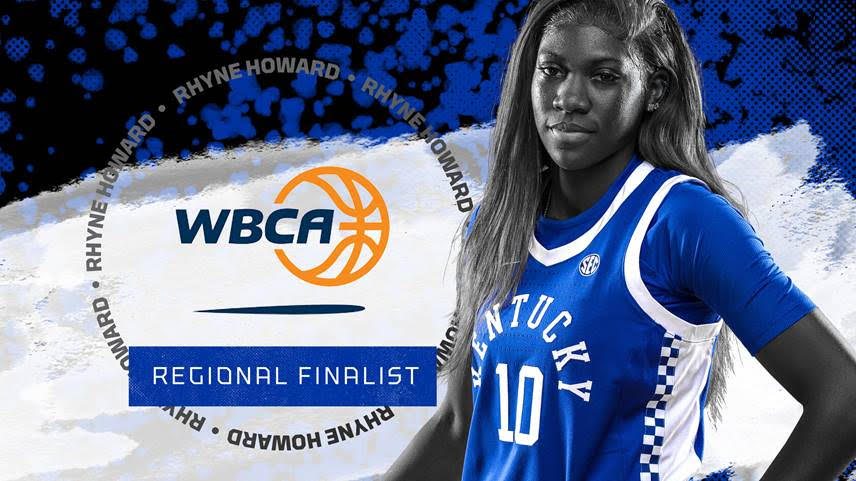 Guard honored as one of the best players in WBCA Region 2, up for All-America honors

University of Kentucky women’s basketball sophomore guard Rhyne Howard has been tabbed a regional finalist for the Women’s Basketball Coaches Association All-America Team after coaches in the second region tabbed her one of the 10 best players in the region.

It has been accolade after accolade for Howard this postseason, earning multiple first-team All-America honors and being named a finalist for several national player of the year honors. Most recently, Howard became the third player in program history to earn first-team All-America honors from the United States Basketball Writers Association, which automatically makes her one of five candidates for the Ann Meyers Drysdale National Player of the Year award from the USBWA.

Howard was also recently named one of four finalists for the Citizen Naismith Trophy, recognizing the most outstanding women’s college basketball player of the year. She is looking to become the first Kentucky player to win the prestigious award while she is believed to be the first to make the top-four finalists for the award, which started in 1983. Fans have the chance to vote for Howard and help her potentially win the award through April 1, by visiting naismithfanvote.com to cast their ballot. The fan vote will account for five percent of the overall vote.

The honors the last few weeks join a list of accomplishments this season for Howard, who is also on several other national player of the year ballots or lists. Howard is a top-five finalist for the Cheryl Miller Award, which names the top small forward of the year in collegiate women’s basketball and fans have the opportunity to vote for Howard for the award at www.hoophallawards.com. Howard is also on the national ballot for the John R. Wooden Award and on the latest watch list for WBCA Wade Trophy.