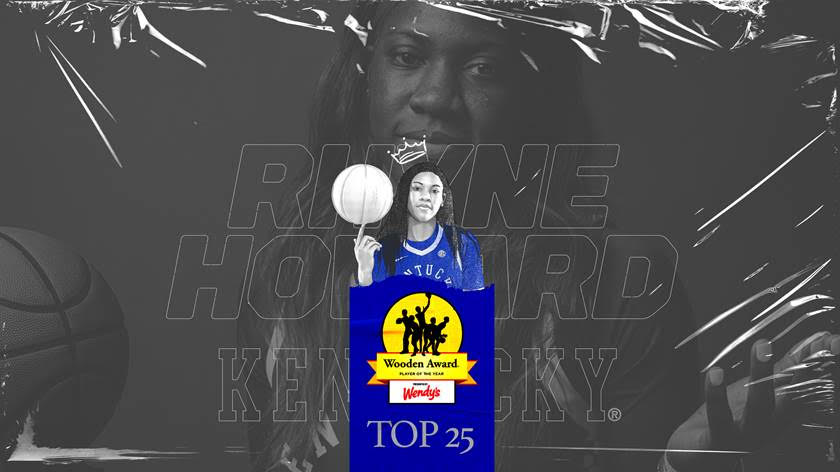 Sophomore guard was espnW National Player of the Week this week

LEXINGTON, Ky. – The national praise continues to come in for University of Kentucky women’s basketball sophomore guard Rhyne Howard who has been named to the John R. Wooden Award Midseason Top 25 Watch List, establishing her as a top candidate for national player of the year. The Wooden Award Top 25 Watch List was announced Wednesday night on ESPNU.

The honor comes days after Howard was tabbed the espnW National Player of the Week and Southeastern Conference Player of the Week following an impressive start to league play for the guard with 28 points, six rebounds and two assists at South Carolina before hitting a school-record tying seven 3-pointers with a career-best 37 points against Tennessee. Howard led Kentucky in points, rebounds (9), assists (5), steals (3) and blocks (2) against the Lady Vols. The strong performances were the third and fourth straight 25+ scoring games for Howard, becoming the first player to accomplish that feat since All-American Valerie Still did it during the 1980-81 season. Howard’s 37 points were the most scored by any SEC player this season and marked the most points scored by a UK player against Tennessee in program history. The native of Cleveland, Tennessee, becomes the fifth UK player ever to score 37 or more points in the game and the first since Makayla Epps had 42 against Mississippi State on Feb. 12, 2015.

For her career, Howard has 841 points, needing just 159 more to join Kentucky’s 1,000-point club. In 46 career games, Howard has hit at least one 3 in 41 games, scored 10+ in 39 games, scored 20+ in 19 games and led UK in scoring in 27 games. The reigning unanimous national freshman of the year last season, Howard has been tabbed to nearly every watch list for national honors, including the Citizen Naismith Trophy Top 50, John R. Wooden Award Top 30, Cheryl Miller Award Preseason Watch List, WBCA Preseason Wade Watch List, USBWA Ann Meyers Drysdale Watch List and was Preseason All-SEC First Team by both league coaches and league media. This season, Howard has been named the espnW National Player of the Week and is a two-time SEC Player of the year. Last year, Howard set a new league record by earning eight SEC Freshman of the Week honors.