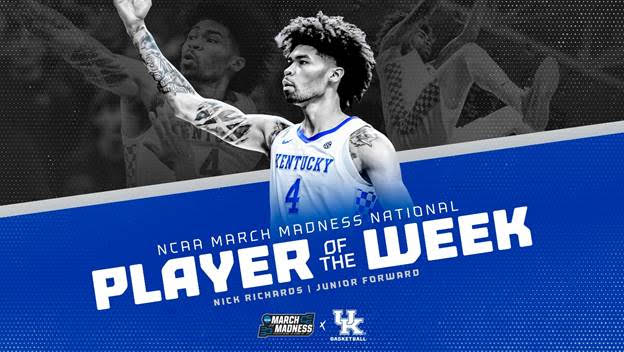 LEXINGTON, Ky. – Establishing himself as a midseason frontrunner for Southeastern Conference Player of the Year, Kentucky men’s basketball junior forward Nick Richards raked in multiple awards Monday for his dominating performances in victories over Georgia and at No. 18/18 Texas Tech.

The third-year Wildcat began the week with a strong outing vs. Georgia, recording 20 points on 7-of-12 shooting to go along with eight rebounds and three blocks. It would prove to be the appetizer for the weekend’s main course in Lubbock, Texas.

In a hostile environment at Texas Tech, which owned a 54-game home nonconference winning streak, Richards made his best case yet as one of the top players in the country. Playing a career-high 39 minutes, he matched a career high with 25 points to go with 14 rebounds and four blocks for his team-leading eighth double-double of the season in the 76-74 overtime win.

In doing so, Richards became just the second Kentucky player in the John Calipari era to post at least 25 points, 14 rebounds and four blocks in a game – and the first to do it against a ranked opponent on the road. The 2012 national player of the year, Anthony Davis, did it on Jan. 17, 2012 vs. an unranked Arkansas team at home.

Richards was 7 for 10 from the field and 11 of 14 at the free-throw line, the latter two of which are career highs.

More importantly, it was Richards’ dominance and composure down the stretch that underscored the latest development in his meteoric rise. After scoring the final three points in regulation, Richards recorded seven points in overtime, including the game-winning free throws with 10 seconds to play.

“He’s jumped right up there to the front for SEC Player of the Year,” ESPN analyst Jimmy Dykes said as Richards stood in front of the heart of a raucous “blackout” environment in United Supermarkets Arena and calmly sunk the deciding free throws. “The last two years, Nick Richards would maybe not even want to be in the game right now. Now, not only does he want to be in the game, he wants the ball at the free-throw line, shooting into a student section on the road. What growth!”

Richards entered the season averaging 4.5 points, 3.9 rebounds and 1.1 blocks over 13.4 minutes a game with one double-double in the first two seasons of his career. Now he leads the team in scoring (14.3 per game), rebounding (8.1 per game), blocks (2.5 per game) and double-doubles (eight) while shooting a conference-high .675 percentage. That mark is also good for sixth in the nation, through games on Jan. 25.

The centerpiece of a frontline that entered the season with questions about its depth and talent after losing PJ Washington and Reid Travis to the pros, Richards has squashed any and all concerns about his ability to produce.

“How many guys have 7-footers that can do what that kid does?” Calipari said after the Texas Tech game. “Not many.”

Case in point: Richards is one of just two players in the country averaging at least 14.0 points per game, at least 8.0 rebounds and at least 2.0 blocks while shooting at least 65.0% from the floor.

In a program headlined by one-and-done success stories, Richards stuck to his own timetable. He didn’t start playing basketball until midway through his teenage years, so not only was he behind the traditional development curve, he also lacked the demonstrated performance of his peers. Now that he’s built his own confidence, he has emerged as an All-American candidate.

“Everybody has their own story,” Richards said Saturday. “Just because I go to a school that’s known for one-and-done doesn’t mean I have to be one-and-done. It took me time to develop over the past three years. I’ve had the best time of my life. Meeting incredible people, having the best coaching staff in the world training me to be the player I am right now and to be a better player for times to come.”

As Richards goes, so does UK. Kentucky is 14-1 this season when he scores in double figures, 8-0 when he grabs double-digit rebounds and 6-1 when he blocks at least four shots.

Kentucky has dominated the weekly SEC awards under Calipari. UK has won more weekly SEC honors (106) than any other school during the Calipari era, including 83 SEC Freshman of the Week honors and 23 SEC Player of the Week awards.