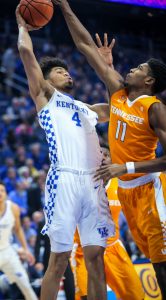 Lexington, KY- UK and the Tennessee Volunteers took the court in a critical matchup of SEC EAST Opponents.  Kentucky is a team coming off bad loss to the Missouri Tigers on Saturday February 3rd, 2018.  Kentucky is currently in uncharted waters as the team is barely hanging on to a national Ranking of #24 in the AP poll, and is currently in 4th place in SEC standings.  The VOLS are one of the hottest teams in the country currently on a five- game win streak and currently ranked #14 in both major polls, the AP and the Coaches Poll.  The VOLS are a well- coached team with a lot of experience starting three sophomores and two juniors.  Rick Barnes has done an excellent coaching the VOLS and are one of the best Teams Tennessee has had in recent years.  Tonight’s matchup is a rematch of a game played on January 6th at Thompson Boling Arena in Knoxville, Tennessee.  Tennessee pulled away late during this game and defeated the CATS by nine points 76-65.

Although, Tennessee is a higher rated in the polls, The VOLS entered tonight’s game as a one- point underdog.  Kentucky has historical dominated the series between the two programs with an overall record of 153 wins and only 70 losses.  Kentucky has not lost a home game to Tennessee since the 1998-1999 season, and the CATS have only lost 4 times to Tennessee at Rupp since the arena was established.  The CATS are playing a crucial game against a rival school, a win would give UK momentum and potentially keep UK ranked nationally.  A loss would be likely drop UK out of the polls, put the team further back in league standings and give the CATS its second two game loosing streak of the season. A loss could also put UK playing on the opening night of the SEC Basketball tournament, something UK hasn’t done in years.

Kentucky gets the tip, and immediately sets their offense, feeding the ball down low to Forward Nick Richards.  Richards was unable to score, and Tennessee get the ball in transition with an opportunity to score.  The VOLS were unable to score and each team tries to get a tempo established.  Richards is the first player to score, knocking down one free throw with 18:29 remaining in the first half.  The VOLS get the ball and score two points on the layup by #12 Jordan Bowden.  The scoring possession included four consecutive offensive rebounds.  Tennessee 2- Kentucky 1 17:52 remains in the half. The VOLS stop UK from scoring on the next possession and takes an early 3 Pt lead as Kyle Alexander scores two points on the lay up in transition.  The cats tie up the game as reserve point guard Quade Green connects with a 3pt basket from the top of the key.  Kentucky regresses and begins to become turnover prone, UK is also struggling to score the ball, the only points scored come from the charity stripe.  At the under twelve -minute media timeout the score is very low scoring with UT hanging onto a one- point lead UY 9- UK 8 11:49 remained in the half.  Quade Green Breaks the scoring drought with a three- point basket, giving the CATS a three- point lead.  UK 12- UT 9 10:17 remains in the half.

The first segment of the first half was hard to watch, as both team struggled to score the ball and the game was dictated by the Referees calling numerous fouls.  The second segment of the first half was a little more bearable to watch, as scoring picked up on both sides.  UK’s Alexander has success scoring the ball and has success beating his defender off the dribble, getting the ball into the lane or finding teammates for open shots.  With 5:12 remaining in the first half Alexander breaks down the Volunteer defense, draws three defenders, and finds Jared Vanderbilt for an over the top one hand slam dunk.  Up to this point the Rupp Arena patrons were exceptionally quiet, as the team played sloppy and was unable to score.  The play brought the Arena to its feet, the play was one of the few highlights of the first half.  The play gave UK a one- point lead 14-13 over UT.   UT answers on the next possession as Grant Williams makes two free throws, giving the VOLS a one- point lead 15-14. Scoring picks up over the next 2 minutes with multiple baskets by each team.  Kentucky takes a three- point lead as Quade Green scores two points on the lay up in transition.    UK 22- UT 19 2:22 remained in the half.  UT answers with a 5- 0 run as Admiral Schofield scores two and Lamonte Turner scores three points in transition.  Nick Richards ties the at 24 with a spectacular dunk, on the lob play from Alexander.  Lamonte Turner of UT scores a three- point basket late in the half, and UT leads by three points with 12 seconds remaining in the half.  UK’s Green scores 2 points on the jumper in the closing seconds of the half.  UT takes a one- point lead to the locker room, leading the CATS by one point.  UT – 27- UK 26.

Tennessee opens the half forcing a turnover by UK, The VOLS score two points in transition taking an early 3Pt lead.  Kentucky counters with a 4-0 run as Richards scores with a thunderous dunk and Quade Green scores two points with a floater in the lane.  19:01 remained in the second half, UK leads 30- 29.  The teams trade baskets on the next couple of possessions, and at the first media timeout UT leads UK by three points.  UT- 35- UK 32 15:45 remaining in the half.  Kentucky comes out of the timeout focused and Kevin Knox provides spectators with a highlight reel dunk.   Knox drives the lane, finding an opening finishing with a play with a strong one dunk.  Knox is fouled makes the FT and once again the game is tied at 35. UK is playing with confidence and the crowd comes alive being excited.  UK starts to build on the lead, leading by three points with 12:20 remaining in the second half.  UK 38- UT 35.  Tennessee scores 2 pts as Jordan Bowden connects at the charity stripe.  Kevin Knox answers with a jump shot with 11:42, UK regains a three- point lead.  UK 40- UT 37.  Shai Gilgoues- Alexander scores 2 pts after UT again cuts the lead to one- point, UK maintains a three- point lead 42-39.  UT’s Jordan Bowden ties the game at 42 with a made three- point basket.  On the next possession UK freshmen Hamidou Diallo turns the ball over with a forced pass, allowing UT to get in transition scoring 2 pts and giving the VOLS a 2pt lead.  The play would be the Star Freshmen Diallo’s last play of the game, as Coach Cal Pulled the star who played a subpar game.  Diallo is typically a good scorer and possible UK’s best finisher due to his speed and athletic ability.  Diallo was very ineffective in tonight’s contest.  Diallo is held scoreless, shooting 0-3 from the field, 0-2 from the 3PT line, committing 2 fouls, 2 turnovers in 13 minutes of game action. The teams trade baskets as UK would score, only to be soon answered with a UT scoring possession.  At the under eight- minute media timeout UK trailed UT by two points.  UT 46- UK 44 with 7:41 remaining in the game.

The game is approaching the final minutes of regulation and both teams continue to compete, trying to pull out the victory. UK’s Alexander breaks down the UT defenders and finishes the play with a strong one hand dunk, tying the game at 46.  UT answers on the next possession as Admiral Schofield dunks the ball strong, the next two minutes saw a lull in which neither team would score.  UT’s Grant Williams is fouled and makes both free throws giving the VOLS a 4 pt lead.  UT 50- UK 46 4:53 remains in the game.  PJ Washington is fouled hard on the next possession and he reduces the deficit by hitting both free throws.  Jared Vanderbilt steals the ball from UT drives the lane and finished the play with a layup.  The game is once again tied @ 50 and is the twelfth tie of the game. The cats become aggressive on the defensive end of the ball forcing a turnover.  Kevin Knox finishes the play scoring 2 pts on a layup in transition.  Knox is fouled, makes the shot.  UK has a 3 pt lead with 3:17 left in the game.   UK 53- UT 50.  The Wildcat faithful once again become excited, creating energy that transitioned to the court.  The next seven possessions are scoring possessions by each team.  UK has a 2 pt lead 56-54 with 2:11 remaining in the game.  Tennessee ties the game at 56 with two made free throws by Grant Williams. Fans of both teams come alive, trying to urge their team to finish strong and get the victory.  The arena is louder now, than at any time during the game. UK’s Alexander scores 2 pts with a floater in the lane, UK regains a 2 pt lead with the score UK 58- UT 56 1:28 remained in the game.  Kentucky stops UT from scoring and the CATS have the ball in transition with an opportunity to increase the lead.  Alexander has the ball and tries to throw the ball to a teammate streaking down the court.  The pass is intercepted by Tennessee allowing numbers in transition for the Vols.  Lamonte Turner makes a 3PT basket, giving UT a one- point lead with 26 seconds remaining in the game.  UK 58- UT 59.  Alexander has the ball in his hands attempting to redeem his mistake of a turnover on the previous possession.  UT traps the point guard, resulting in another turnover.  UT Admiral Schofield finishes the play with a dunk in transition.  UT leads by three points 61- 58 with only 4 seconds remaining in the game.  On UK’s inbounds play UT quickly fouls Alexander, eliminating any chance of a made 3 Pt basket from the CATS.  Alexander makes the first, while intentionally missing the second.  UT prevails with a 61-59 victory over UK.

Kentucky drops on the season to a record of 17 and 7 and 6-5 in SEC play.  The loss tonight is the second time this season UK has experienced a two- game losing streak.  The loss also allows Tennessee to sweep the season series with Kentucky, for the first time since the 1976- 1977 season.  Kentucky continues SEC conference play on Saturday February 10th, 2018 traveling to College Station, Texas.  The CATS take on a talented Texas A and M team that nearly upset UK at Rupp only losing by 1 pt 74- 73 on January 9th, 2018.  Kentucky is currently tied for fourth place in SEC standings.  Tennessee improves on the season with an 18- 5 record and 8- 3 in SEC play.  Tennessee stays in SEC conference play in their next game, traveling to Tuscaloosa, Alabama battling the Alabama Crimson Tide.