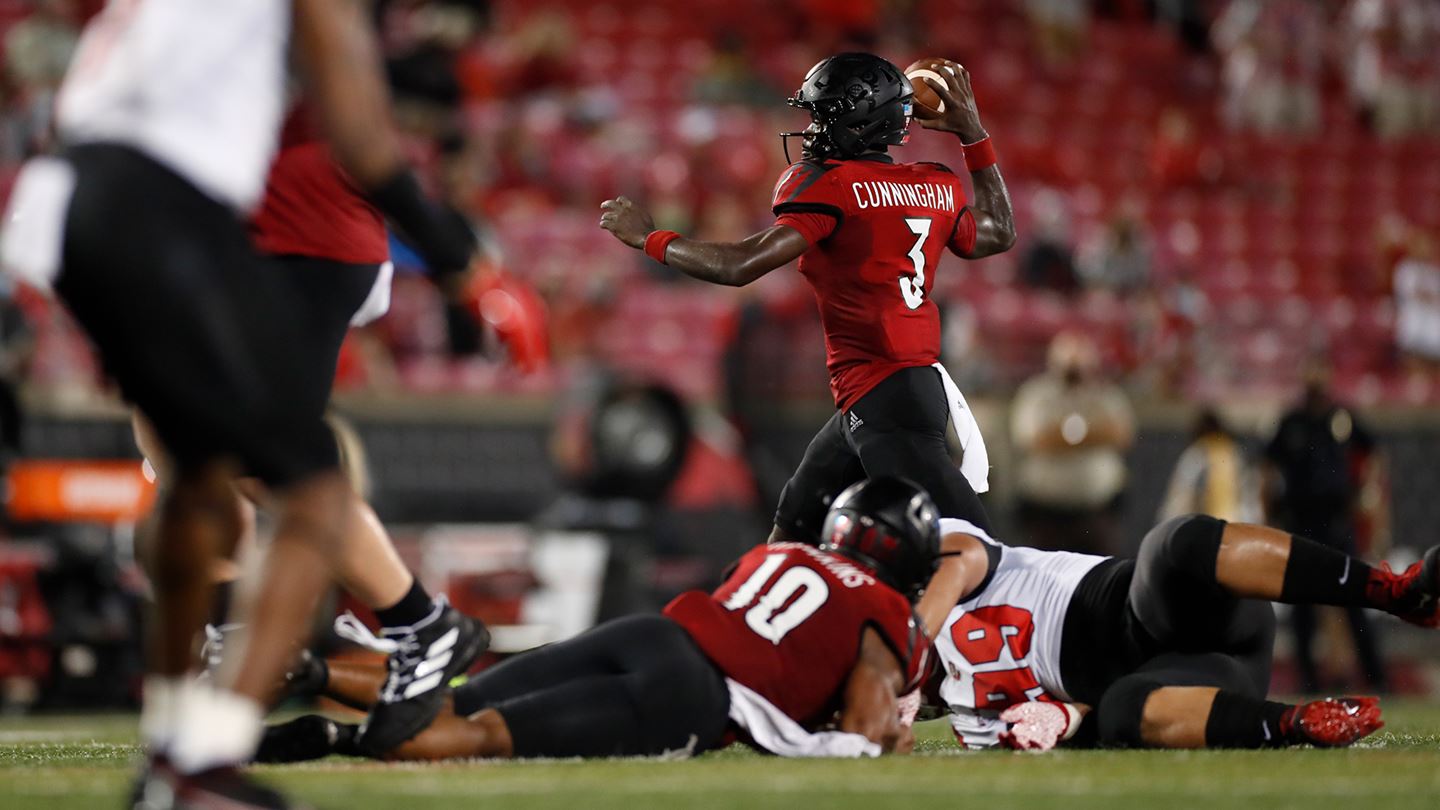 The University of Louisville football team continues to search for answers to its slow start to the 2020 season, and will have to do it against one of the nation’s most complete teams.

The Cardinals conclude its three-game road trip when it face No. 4 Notre Dame at Notre Dame Stadium on Saturday at 2:30 p.m. It’s the first visit to South Bend for the Cardinals since a 31-28 win over the Fighting Irish in 2014.

After dropping three-straight games, the Cardinals aren’t doing the things from last year that made them one of the top stories in the country.

“I think the other thing that we haven’t done a good job with so far this year is hitting on our deep shots,” UofL head coach Scott Satterfield said. “We look back to last year, we were really good at big plays. We have to be a big play offense because we have big play players with the kind of speed that we have, with some of the skill guys, we have to be able to utilize and hit those guys, and we were not able to connect on some of those plays.”

Last season, the Cardinals were one of the top teams in the country when it came to plays of 50+ yards, hitting long scoring plays or just big plays in the passing game. Through four games, Satterfield is still looking for solutions.

“It seems like there’s something different,” Satterfield said. Malik’s overthrown a few of them, but it seems like there’s been something different, whether it be Malik not throwing the proper ball or the receiver not running the proper route or the offensive line or tight ends not protecting. So, in the course of the season, it’s been a little bit of everybody, I think, that have attributed to some of those shots not being there.”

Besides the lack of big plays, turnovers have stopped drives all year long. The Cardinals have turned the football over 11 times this season, nine coming in the last three games. In the loss to Georgia Tech, three fumbles stopped drives and led to 19 Yellow Jacket points.

Well, I think a lot of it is just carrying the football in a position where it’s going to be hard for the defense to get it out,” Satterfield said. And, we’ve been working on it all the time. These guys did a much better job last year obviously, than this year. I think Hassan (Hall) has had what maybe three or four fumbles in the course of the season already. And Hawk the other night gets stripped on one of his. It’s just putting the ball in a position where you’re going to protect it.”

With a big game on the road, the Cardinals aren’t solely focused on the Irish, Satterfield feels like the Cardinals must look in the mirror.

“I think for us, it’s not about Notre Dame,” Satterfield said. “I think it’s, it’s about us in this building, and how well we can go out and prepare this week to play this game and then go out and actually execute and play the game the way we prepared.  I think that’s probably the biggest thing.  Whether we win or whatever we lose whatever the score is to me, what’s going to help make this season for us is that we are coming out and we’re planning, the way we need to be playing, and taking care of the football.
The Irish are the third ranked team on the schedule this season, but the first in the top five. Notre Dame is 3-0 after a 42-26 victory last weekend over Florida State.
“They’re obviously an outstanding football team, top five team every year it seems like in the country.  It is a big challenge, but to me and for our guys and our staff and our team is more about us and how we can go execute and just play at a much better level.”
The Cardinals are familiar with the Irish after the two schools opened the season last year – a 35-17 win for Notre Dame. Head coach Brian Kelly brings back an experienced and talented team that is making a run for the national title.

The number one thing that stands out about Notre Dame is the offensive line,” Satterfield said. “It’s arguably the best offensive line in the country. They have guys that have played a lot of ball together up front. I think Coach Kelly has even said this is his best offensive line since he’s been at Notre Dame. These guys are good at pass pro and run blocking, and Ian Book, their quarterback, is obviously a very good player, especially when they’re able to run the football.
I think what they’ve shown this year is that they’ve got some very good backs that are able to run the ball because the offensive line is able to open up those holes. When you’re able to do that, Book is able to stand back when it is time to make that throw to take his time and find that open receiver. They’re very impressive there.
Satterfield added, “Defensively, they have a lot of seniors, a lot of experience on that side of the ball. Guys can really run to the football. They try to keep everything in front of them and do an excellent job with that. They’re also excellent on third down.”
While not pleased with the record, Satterfield has confidence in his team, and know it can play better, and wants his team to just play each play.

“It’s all about us,” Satterfield said. “I don’t worry about the record. … Just go play ball. For us, it’s about how good we can get on a daily basis. How committed we are as a team to get better. You just take it one week at a time. At the end of the season we’ll look back and we’ll see what happens with the record. We just have to focus on this week and how much better we can get. Our deficiencies, can we improve in those and then hopefully by the end of the season we’ve become a lot better football team and we’ve started to play at a high level. We just have to take it one day at a time, one week at a time.”