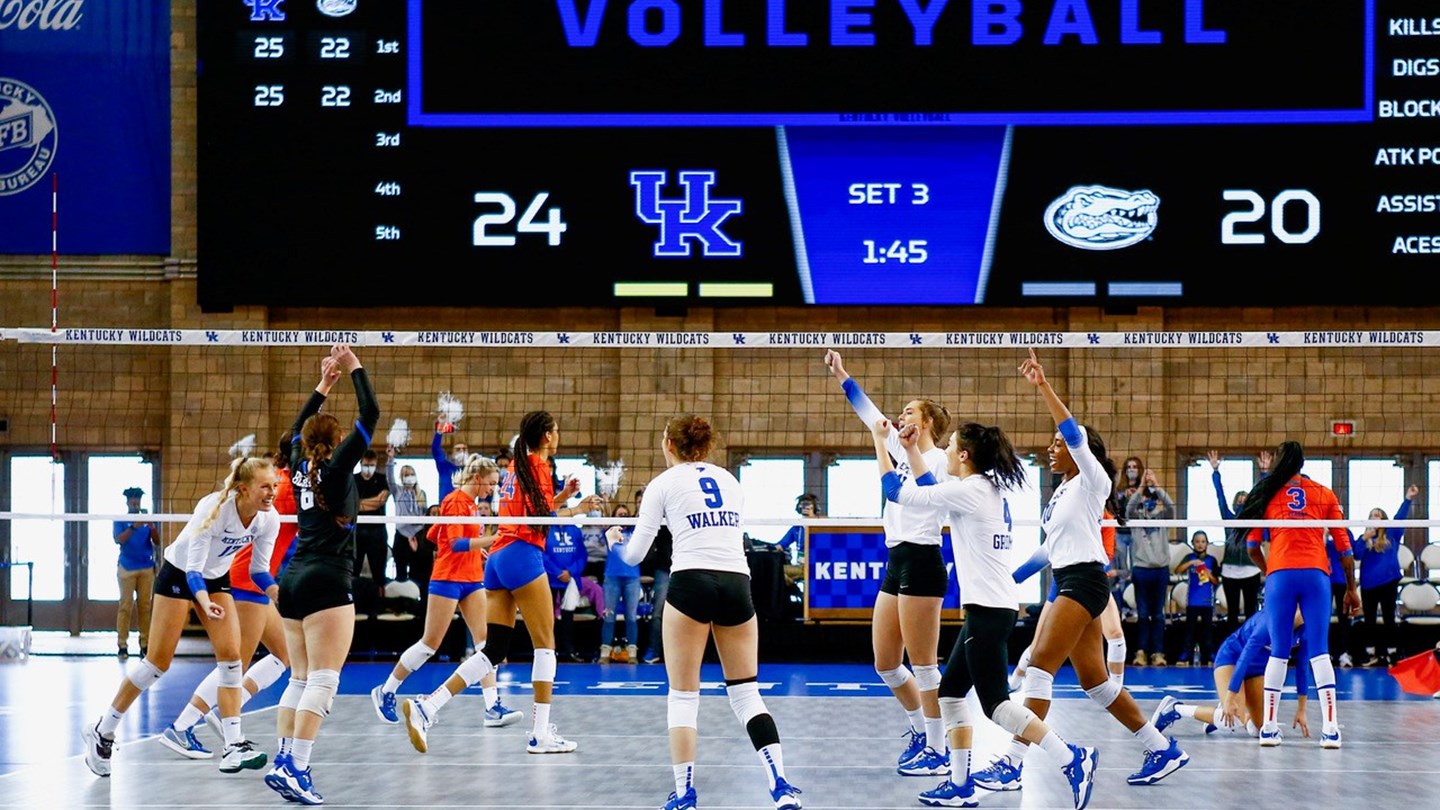 Stumler had 18 kills on the day, hitting .333 on 39 swings. Stumler, along with fellow seniors Lauren Tharp and Cameron Scheitzach, were honored pre-match during Senior Day festivities. Stumler also added in six digs for the match and a block assist, as she helped put a cap on the Kentucky win.

With Friday’s win, Kentucky clinches the SEC Championship for a fifth-straight season, and the SEC’s automatic qualifying spot for the 2021 NCAA Volleyball Championship by virtue of its head-to-head win over Mississippi State in October. With an MSU win and a UK loss Saturday, the SEC title would be split, but UK will still be recognized as the champions due to the head-to-head tiebreaker.

The sweep of the Gators marked the 400th-career victory for Kentucky head coach Craig Skinner.

A season-high crowd of 3,149 fans saw Azhani Tealer record eight kills on the day also hitting .333 on 18 swings. Proving she can play on both sides of the ball at an elite level, she also recorded four blocks and a dig in Friday’s match and an ace.

Eleanor Beavin, freshman libero, lead the Kentucky defense recording 12 digs from the three sets Friday afternoon and also had five assists on the afternoon, as the Wildcats dominated the transition game of the match.

Madi Skinner logged yet another double-digit effort, with 12 kills on 32 swings and a block for a .281 hitting percentage. Skinner joined Stumler as the two Wildcats to hit for 10+ kills in the match.

The regular season concludes Saturday afternoon at 1 p.m. ET inside Memorial Coliseum with UK facing Florida for a final time. The match will be streamed on the SEC Network+, ESPN3 and the ESPN app. The Wildcats’ SEC Championship celebration will take place following the conclusion of the match on the court.

The Wildcats started out strong with a huge kill from Bella Bell, but the Gators kept the set incredibly close in the early going. Senior Lauren Tharp was able to earn the first lead of more than one with an ace and Azhani Tealer kept the momentum high for UK with her first kill of the day to make it 6-4, UK. The competition remained heavy but the Cats pushed the lead to four at 8-4 with a huge kill from Madi Skinner and forced Florida into a timeout off a second Tealer kill at 9-4.  The Gators came out of the timeout strong earning the first two points out of the break and decreasing the Cats’ lead to three. Another monstrous kill from Skinner off a Tealer serve pushed Kentucky back up four, 11-7. Once again Skinner and Stumler were able to propel the Wildcats forward as the lead increased to six, 14-8.  Florida was able to earn a few fast points and diminished the Wildcat lead to just two points at 14-12 and UK called its first timeout. With the score about to be tied up 18-18, Kentucky coach Craig Skinner successfully challenged a net violation call, and that sent Eleanor Beavin back to serve. The fight continued as the Cats were left with a consistent two-point lead, but Bell was able to push Kentucky to 20-17 with a kill from the right pin, followed by a huge kill from Reagan Rutherford which forced Florida into a second timeout with the Wildcats leading, 21-17.  Kentucky kept adding on the points after the time out off a kill for Skinner and an ace by Emma Grome which put Kentucky at set point. After the third set point, the Cats called a second time out with the score at 24-21. Out of the timeout a Gator ace pushed UK to 24-22, but an attack error ended the set, and Kentucky won, 25-22, to take the opening frame.

The first point of the second set was earned by Reagan Rutherford on a huge kill. The Gators and Cats alternated points off of kills until Coach Skinner made his second successful challenge pushing Kentucky up two at 4-2. The kills continued as Tealer got the Wildcats to 5-3 with her seventh kill of the day. Bell was able to gain more momentum with her second huge kill of the match, but Florida continued to stick around with the Kentucky lead at just one point and eventually tied at 10-10. A kill from Skinner and an ace from Tealer gave the Wildcats a two-point lead at 12-10 and Alli Stumler continued her torrid match, as she dominated from the back row, getting the Wildcats three-straight kills from the front row to give UK the 16-15 lead.  For the fourth time in the set, the score was tied this time at 15 as it was Stumler who broke the tie with her ninth kill of the day. A huge Grome kill on an overpass forced the Gators into calling a timeout with the Kentucky lead at 18-15. Out of the Gator timeout it was again Stumler who found the floor for her 10th kill. It was Stumler who got the Wildcats to 20, as they worked to finish the set. Kentucky continued to push as Florida called a second timeout, after a huge block from Tealer and Skinner at 22-17. The Gators got the first point out of the timeout, but the Wildcats pushed forward with a thunderous kill from Skinner, and a kill from Rutherford sends the Cats to set point but after two set points, Kentucky called its first timeout of the set at 24-22. Stumler did it again for Kentucky as they won the second set 25-22 on her kill.

Rutherford was the catalyst for Kentucky in the third set with her seventh kill of the match pushing UK off on the right foot. Both teams continued to fight as the score remained within one, and alternating leads for both teams. A third ace by Tharp pushed UK’s lead to 11-10. Kentucky was able to achieve the biggest lead of the set at 15-12 off of overpowering kills by Stumler and Skinner and that sent the match into a media timeout. A monster block from Tealer and Grome combined with a kill from Skinner increased the Wildcat lead and forced Florida into a timeout at 17-12, the largest lead of the set from either team. Both teams got a couple of points out of the timeout, but it was Bell who got the Cats to 20, and a second ace by Grome which forced Florida into a second timeout at 21-15. Stumler had back-to-back kills sent the Wildcats to match point. It was Stumler again who did it for Kentucky as they won the final set 25-20 and clinched the sweep of the Gators.